Waiting for a new building, one UK college has taken a morale hit in an outdated space 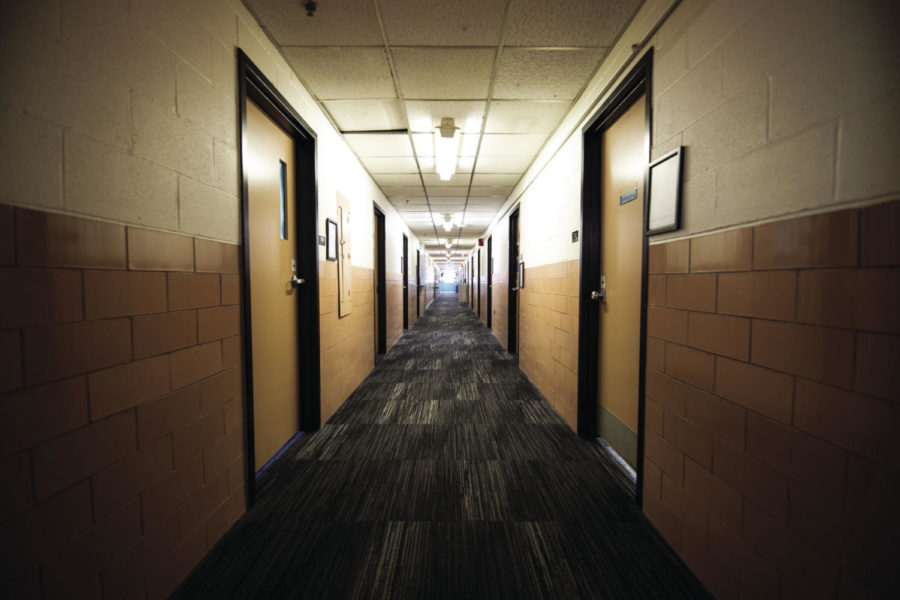 A hallway in the Blazer Dining building on Friday, Jan. 31, 2020, in Lexington, Kentucky. Photo by Jordan Prather | Staff

When UK students returned to campus after winter break, something had changed.

Where fences and construction had once been, the latest infrastructure project on campus was now unveiled: the renovation of the Grehan Building, formerly the Enoch Grehan Journalism Building.

The modernization of Grehan created new classroom space for the growing College of Engineering. But it’s also created issues for the building’s former occupants – members of the College of Communication and Information.

A survey of College of Communications and Information students, completed by the college last year, shows a growing disdain among students for the college’s current temporary home—Blazer Dining.

Of the 1,023 survey takers, about 276 students said they’d had a class in Blazer Dining, and 43 percent of those students said their classrooms in Blazer were not conducive to a positive learning environment. The survey was obtained by the Kernel via an open records request.

“I understand the University is making changes that seem ultimately out of our department’s control,” wrote one student in the survey. “Often times, our department seems like an after-thought to the university.”

Jennifer Greer, the dean of the college, told the Kernel that faculty, staff and students have taken a morale hit since leaving Grehan and learning that a brand new building for the college was years away—the Kernel previously reported that the college needs between $8-12 million to jump start the process for a new building. She said she’s positive the college will soon start moving in a positive direction.

As CI faculty moved out of Grehan in June and July of 2018, no funding source had been identified for a new building and faculty, staff and students did not know if they would move back into the Grehan or receive a brand-new building.

“When the architects explained it to us it was very much called ‘flexible space’ that could be made to either suit the needs of engineering or the needs of CI, just depending on the priority of the university,” said Sizemore.

As of April 9, 2018, Vice President for Facilities Management Mary Vosevich said she could not confirm who would occupy Grehan after the renovation was finished.

Grehan was confirmed to be given to Engineering as a “university commitment of support” in an offer letter for the then-prospective College of Engineering Dean, Rudy Buchheit. The contract letter was signed on April 26, 2018.

Blackwell, who as provost hires the university’s deans, told the Kernel that ownership of Grehan was not a negotiating factor in Bucheit’s offer.

Blackwell said he made the decision to assign Grehan to engineering in collaboration with Vosevich, Executive Vice President Eric Monday and then-College of Communication and Information Dean Dan O’Hare.

Factors in the decision were the modernity of the building, proximity to engineering and opportunities for different colleges to grow.

“Irrespective of who goes in Grehan, it would not be the best college headquarters for CI,” said UK spokesperson Jay Blanton. “That building was not going to be the appropriate kind of space for the College of CI for the types of jobs you all are being prepared to take. We need space that allows for that convergence of media and lots of technology.”

Sizemore said that a renovated Grehan would not have been a perfect for CI because it would still not house everyone. CI is currently spread over six buildings, which has gone down from nine, said Sizemore.

“Moving out of Grehan into one building is something I think everyone was behind. We have not been in one building ever in the history of our college,” said Greer.

Blackwell said a building for CI was a part of the plan throughout the Grehan process. The university only had money to modernize Grehan, not make it everything that the college needed. He said that a new building for the college is still a university priority.

Funding for a new building?

“At the same time, we put on the drawing board a plan for an entirely new building for CI that would house the entire college, have state-of-the-art media technology, space for growth, and that is in our capital plan that is a priority,” Blackwell said.

UK does have legislative authority to issue bonds for the building, said Blackwell and Greer. That authority was granted in 2018 and may expire with the biennium, but Sizemore and Greer said they believed it would go back on the budget.

“What I understand is that once it’s on the table, unless the university pulls it back, it’s going to stay for the next biennium. I anticipate that that funding authority will be renewed so we would have another two years to identify a funding source for the building,” said Greer.

Greer said that a new building would take three years to build once funds are acquired; that estimate comes from 9 to 12 months for design and two years to build.

A concept for a new CI building has been drawn up, but the new building may not look exactly like those plans, Greer said.

The concept drawings are a budget tool and can be used to show potential donors, said Sizemore.

Greer’s ideal vision for a building is co-working and collaboration spaces, to encourage partnership, creativity and flexibility.

“Space can be an important driver of innovation, and that’s what I hope will happen with our new building,” Greer said.

Currently, the School of Journalism and Media and Department of Communications, two of CI’s branches, reside in Blazer Dining. Members of the physics and astronomy departments, who were relocated due to renovation in Chem-Phys, are also located in Blazer.

CI faculty and students are most concerned with the safety of the building and its classroom function.

Several students anonymously voiced their disapproval of Blazer Dining in an internal survey of the college’s students, obtained by the Kernel via open records request.

One survey question asked students for recommendations on how to improve the learning environment within their major. Out of 383 responses, 77 mentioned issues with current CI buildings or the need for a new, central building.

Almost half of the students who said they had classes in Blazer said the classrooms were not conducive to a positive learning environment.

Here is a collection of some of the student responses:

“Blazer Dining needs to be remodeled or have the journalism department in another building,” wrote one student. “I learned well, but the building itself makes me and others feel uncomfortable and it is not sanitary. There are roaches and there was a loose animal this semester. I do not feel safe when having to come late at night to do edits or recordings. Action must be taken.”

“The layout of the classrooms is terrible. You can never see the professor or the screen in the front if they are presenting something because of the computers being in the way. It’s never a comfortable temperature and if the window (A/C) units are on, you can’t hear the teacher talking because they are so loud. The smell is distracting. The animals that run through the building scare me and make it hard to focus. If I have to think about my own personal safety during class I cannot focus.”

“We either are sweating to death from having to turn off the AC units, or struggling to hear the professors while we have the AC on. I’m also severely allergic to mold and can’t breathe the entirety of class.”

Sizemore said new A/C units have been installed in Blazer, and that more will be installed in offices without window units.

“We need normal classrooms,” wrote one student. “I know it’s hard since there’s so many students and limited spaces, but half the time it feels like UK doesn’t care about our major.”

“Blazer Dining is a hellhole that makes every teacher, student and faculty member want to die. It should be DEMOLISHED.”

“The building needs to be taken down. It’s not a comfortable environment that any student wants to be in. Worst building on campus, I’m convinced.”

“It is not a building up to the standard that my tuition pays for.”

“Blazer Hall is outdated and, frankly, disgusting. There are consistently cockroaches in the stairwells, classrooms and restrooms. I got an email a few weeks back about an angry animal somewhere in the ceiling and to avoid the building. The bathrooms are disgusting.”

Greer said the building issues have had consequences for CI.

“The first consequence is, because of the perceived way that people thought they were getting a new building and didn’t, the big consequence quite frankly is the morale of the faculty and staff and in some regard the students that are in our college,” said Greer.

She said leadership in the college has been working on creative ways to build morale and work collaboratively.

“It is hard, what happened, that they had a building and there was talk that their building was going to be fixed up when they go back, and then that you were going to move and go to an even better building – which absolutely will happen, it’s just that the timeline’s longer,” said Greer.

Greer said she did not think the state of CI’s buildings would prevent prospective students from coming to UK, but that from an administrative perspective, recruiting is easier when a college has something flashy to get people excited.

“Can it have an impact? Absolutely. Do we work hard every day to make sure that we make up for some of our facilities challenges in other ways?Absolutely,” said Greer. “We do the best with what we’ve got right now. The big thing is, we’ve got outstanding faculty, we’ve got tremendous programs, we have great alumni support, so we can counterbalance some of those challenges we have.”

Greer said one initiative is a facilities committee organized by Sizemore that brings together people from across the college.

Greer noted that there are other units in need of new space as well, not just CI.

Greer said that the college has benefited from UK’s investment in infrastructure under President Eli Capilouto, even if CI is not occupying the new spaces.

“We have wonderful new student centers, dining halls, residential life facilities, new classroom spaces, and that just can’t happen all at once,” said Greer. “It’s easy for us who are in this for the long-term, who are going to be here for a decade or longer, to see the bigger picture. It’s harder for students who are coming in for four years to see we’re part of the ongoing transition of the university that hasn’t reached fruition yet.”