‘There’s no way this is OK:’ UK students mourn loss of over 200 trees on-campus 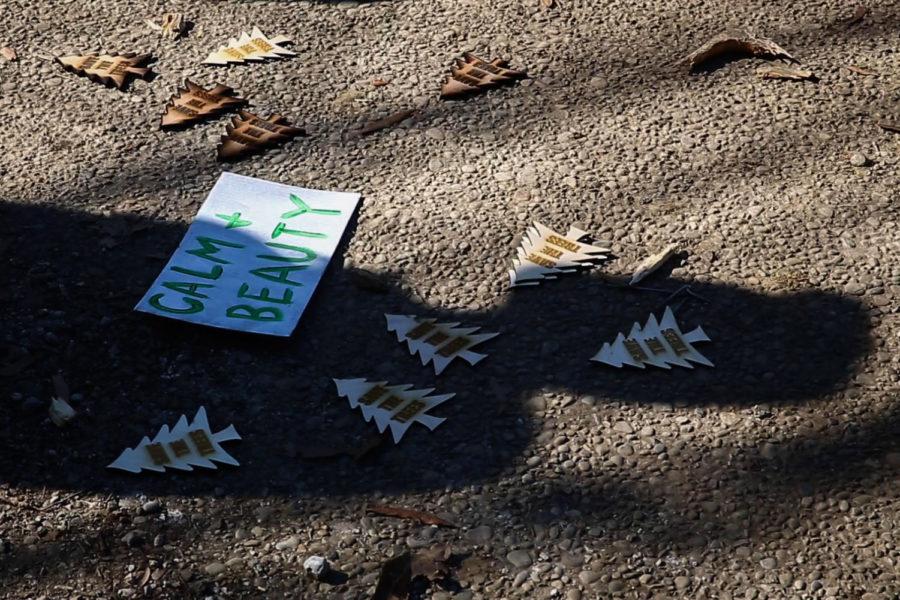 Laser-cut trees reading "Save the Trees" were handed to participants during the Tree Funeral near the Kirwan-Blanding complex on UK's campus on Friday, Feb. 21, 2020.

Dozens of students gathered below the Kirwan-Blanding Towers on Friday afternoon to mourn the clear cutting of over 200 trees on UK’s south campus.

Of 242 trees that dotted the grounds surrounding the decades-old towers last week, only 11 will remain after the demolition, according to Claire Hilbrecht, the organizer of the Tree Funeral.

“UK administrators have failed in their commitment to us and to the environment,” Hilbrecht, a junior natural resources and environmental science major, said during a speech. “They have prioritized quick and cheap development practices over ecological considerations.”

Hillbrecht’s speech occurred over the din of active demolition crews preparing for the Towers’ impending removal. Those in attendance – mostly students – held signs from recycled materials and distributed laser-cut wooden trees reading “Save the Trees.”

Madison Moreno, a junior natural resources and environmental science major in attendance, said she was “blindsided” by the tree removal. Moreno “had no clue” about the university’s plans until she was shown a photo of the dirt mounds and construction left in the demolition’s wake.

“I felt like I wanted to chain myself to a tree at that point. Like, there’s no way this is OK,” Moreno said.

Although dubbed a funeral, the event largely focused on the future.

“We didn’t want (the event) to be something like, ‘oh wow, it’s so sad that the trees got cut down’ – and then no action is taken about it,” Hilbrecht told the Kernel. “We’re actually very upset about what happened and knew there should be a call to action.”

Several attendees signed up to remain informed about “what the next steps are” to address the clearcutting, according to Hilbrecht. Although those next steps have yet to be hammered out, Hillbrecht said she personally hopes to see better communication between UK administration and students.

In December, Executive Vice President for Finance and Administration Eric Monday announced that the complex surrounding Kirwan-Blanding would be transformed into a new greenspace. In a UKNow release, Monday said that UK “would preserve the allée of trees that makes that area of campus so distinct.”

But Friday’s funeral-goers believe UK has done the very opposite.

In an earlier statement to The Kernel, UK Spokesperson Jay Blanton said the university is honoring its commitment to tree preservation near Kirwan-Blanding.

“Indeed, we will be adding trees to this area. Our goal, moreover, is to enhance and add greenspace that will become a central gathering point for students and our campus community,” Blanton said.

“(The greenspace) sounds like a good idea, ideally, but the plan does not seem like it’s well-developed yet. There needs to be more work done to make it a truly effective and good greenspace to replace the space that was lost,” Winebarger said.

Blanton did not confirm the timing of the clearcutting. He did, however, confirm that just over 200 trees are scheduled for removal in the complex surrounding the Towers over the coming weeks, and that over 100 have been removed thus far. He said 11 or 12 will remain in the space, while 3 will be transported to another spot on campus.

“A demonstration of our commitment to this endeavor is that we’ve planted more than 500 (trees) in the last five years around campus,” Blanton said. “At the end of this process, we will plant more trees in this area than we will remove, while also preserving the two allées to which we committed. There is an extensive plan for tree planting for the new site (near Kirwan-Blanding).”

“This demolition should not have been done with such little care for ecological principles. UK administrators: We can do better,” Hilbrecht said. “To use the language of the administration: Let us finally make the University of Kentucky the University for Kentucky. And let’s start with the trees.”