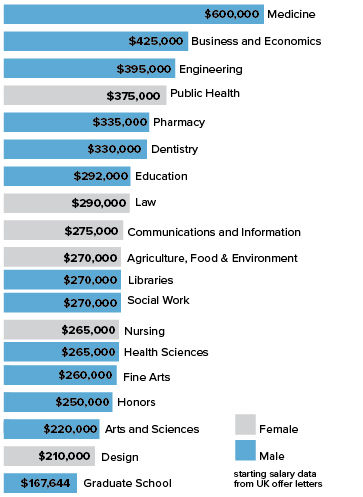 This graph shows starting salaries for all 19 of UK's deans using data from their offer letters, which were obtained by the Kernel. Graphic by Haley Robey | Staff

In addition to the pay gap, women account for less than half of all the college deans at UK, despite the student population being majority female.

According to salary numbers obtained from the 2019 UK payroll database published by the Lexington Herald-Leader and from offer letters obtained through open records requests, women who serve as deans of the 16 undergraduate colleges are paid 83 percent of what their male counterparts are paid.

UK Provost David Blackwell said the disparity in salaries is likely due to the relative disciplines, and that the dean salaries overall correlate strongly to subject.

“The marketplace is about the discipline, it’s not the gender per se,” said UK spokesperson Jay Blanton. “Engineering, medicine, those disciplines pay a lot more than say, other disciplines – honors, liberal arts – that’s the marketplace we’re in. The issue that you’re raising about gender, we’ve done a lot of study over the last several years and you’ve got to look at the whole system.”

Of the 10 highest-paid deans at UK, based on current salary, three are women, with only one – Donna Arnett of the College of Public Health – in the top five.

Additionally, contract letters containing the starting salaries of all deans, including the Honors College, Graduate School and UK Libraries, show a gender pay gap in starting salary for both the undergraduate colleges and across all 19 dean positions.

According to the contract letters for all current deans, which were obtained by the Kernel via state open records requests, the starting salaries for women in dean positions are 90 percent of what men receive across all 19 dean positions. That number drops to 83 percent when considering just the 16 undergraduate colleges.

Blackwell said high salaries for healthcare fields is common for large universities like the University of Kentucky.

“There’s two factors: when you’re a dean, you’re giving up your medical practice essentially, and that’s usually pretty lucrative,” Blackwell said. “And those organizations are incredibly complex, you just have to get the best people in there, so those salaries have to be competitive.”

Blackwell said there are two main factors in determining a dean’s initial salary: national competitive benchmarks and the salaries in the discipline.

“We are a top research university and a flagship, so when you think about who we’re competing with for talent it’ll be places like Texas A&M University, Ohio State, Michigan State, schools of that caliber are competing for this talent, so that’s one factor we have to look out for – what are deans being paid for similar disciplines at other major research universities,” said Blackwell.

“Higher-paid disciplines – think medicine, engineering, business, those are good examples – those faculty tend to get paid more than faculty in other disciplines and deans typically come from the faculty ranks so when you hire a dean essentially, to compete, you have to give them, for the additional responsibility, more money on top of what they would have been paid as a faculty member to assume that responsibility,” said Blackwell. “So depending on which college we’re talking about, a dean’s salary could be lower in one college than in another simply because the faculty position that person was in had lower pay to start with.”

Arnett said she was not aware of the pay gap between deans at UK, but said that it was consistent with national averages.

A Pew Research Center study reported that in 2018, women earned 85 percent of what men do.

Alternatively, the Census Bureau found that in 2017 the gender pay gap was 80 percent.

“I am surprised that we have that gap here,” she said.

Arnett said she did not think discipline alone could fully account for the pay gap, but that another factor in salary was prior experience. She said her starting salary as a dean was her previous salary plus a $50,000 stipend; she brought experience as the president of the American Heart Association and as a recipient of grants from the National Institute of Health.

Currently, only three female deans have a salary above $300,000, compared to seven men.

More female leadership is near, but not yet

Blanton said the gender imbalance is a question of how faculty move up the ranks; deans typically earn the position after moving up the ranks of professor.

“We have a lot of gender, maybe not equity, but a lot more gender balance when you talk about those initial ranks like assistant professor,” Blanton said. “But what happens is sometimes women, if they maybe make the decision to have a family, in their career they take a break and we’ve got to get to the point of not having that kind of career decision derailing or impeding their progress. It’s not a dean issue per se; it is a dean issue, but it’s the whole system.”

Six of the 16 undergraduate college deans are women. When including the deans of the Honors College, Graduate School and UK Libraries, women account for only 31.5 percent, or six out of 19 deans.

The undergraduate population at UK is 55.9 percent female students, according to UK’s enrollment and demographics data webpage.

“If you look at the deans that are women, and I would say to be really thorough and look at my entire teams – I’ve got associate provosts and deans that are kind of on the same line in the org chart – I think if you looked at that total it’d probably be half women, or closer to half women. Among the deans, it’s a fair question, it’s not even,” said Blackwell.

A challenge in leadership diversity

Blackwell said that one challenging in diversifying the dean population is that there is not a lot of turnover – a term lasts for six years and many deans serve beyond that, so vacancies are rare. When a dean position becomes available, Blackwell typically hires a search firm and also forms a search committee.

“Since I’ve been provost, the search committees I’ve formed have been half men, half women,” Blackwell said. “I charge the committees with building a pool of candidates that is diverse, which means I want women represented, I want different races and ethnicities represented in the candidate pool so that I have the best chance of finding someone who is qualified. And if they’re a woman, or African-American, that is really great to have that choice in that pool and when those candidates have risen to the top I pull out the stops to recruit them.”

Of the six deans hired in 2019, two were women: Jennifer Greer of the College of Communications and Information and Mary Davis of the College of Law—who will serve as interim until former Dean David Brennan returns from a year-long fellowship.

Blanton said that as student bodies across the country are becoming majority female, the pipeline for female leadership is beginning to change.

“Is it happening more slowly than we want? Sure, but that pipeline is changing and you’re going to continue to see that change as the composition of the student body changes and as workplace rules and policies become more friendly, and I think we’ve done some of that as well at the institutional level,” said Blanton, saying that at UK many associate deans and members of the provost’s senior team are women.

Blackwell said one issue with the pipeline is that certain disciplines, like engineering, are historically male.

“It’s really challenging to recruit women faculty to engineering because there aren’t that many women getting Ph.D.’s in engineering, and that’s a national phenomenon. So when you look at the pipeline of possible deans, you’re already limited,” said Blackwell.

Blackwell said UK is trying to encourage for female faculty to move up the ranks with leader development programs.

One such program is the Women’s Executive Leadership Development Program, an eight-month program that Blackwell said collaborates with the provost’s office.

The Southeastern Conference Academic Leadership Development is a collaboration between universities in the SEC; UK sends four fellows annually to participate in workshops, some of which are hosted on the UK campus.

“We’re always mindful of putting women and minorities into that program so that hopefully when they come out of those things, they can become a department chair, from department chair go to an associate dean or dean or even vice president. We’re trying to build that pipeline internally to help us along that dimension,” said Blackwell.

Despite accounting for 37.5 percent of the undergraduate dean population, women receive only 33.2 percent of the salary total for those 16 positions, based on the starting salaries.

Based on current salaries, women receive 33.7 of the total salary for the 16 undergraduate deans.

Blackwell said that this narrowing is a factor he considers at raise time.

“If I see a glaring incident of let’s say, a woman dean making a lot less than the average, I have made increments to some of those deans to get them closer,” said Blackwell.

Of the 11 deans whose current salaries were found in the UK payroll database, 9 had received raises since their starting salary, found in the offer letters obtained by the Kernel.

Four women received raises, averaging an increase of $39,739.75 over their starting salary.

Five men have received raises, averaging an increase of $45,960 over their starting salary.

Because raises are determined annually, it cannot be determined if these increases are the result of consistent annual growth or one-time increases.

The two deans who had not received raises were hired in 2018.

“All the deans are expected to engage in philanthropy, meaning they develop relationships with alumni or organizations that give grants to universities to raise money to enhance the excellence of UK. That money is over and above what we get from tuition or what we get from the state, so that’s a big factor. And they need to make relationships with employers of students and help build pipelines from UK to key employers in their discipline,” said Blackwell.