‘The Mad Scientist’: Why your life would be different without fruit flies 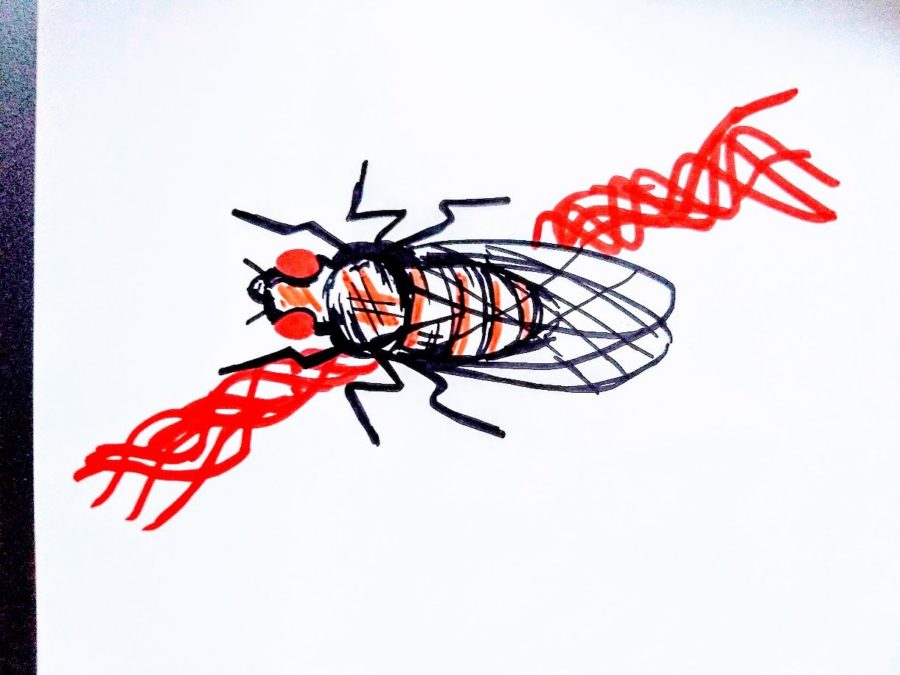 The Mad Scientist is a new bi-weekly column by biology senior Thomas Hart.

Fruit flies can be very annoying. But did you know they’re a very commonly studied organism in biology? Despite how many of these tiny insects have invaded your fruit bowl or become unwelcome residents of your trash can, fruit flies may have had a bigger positive impact on our world than you might think.

Scientists commonly study some oddball organisms. Fruit flies, zebrafish, nematodes and water fleas are just a few on the list. These animals seem nothing like humans, and one might argue that scientists are wasting their time and lots of funding to study these random animals. However, organisms that may seem insignificant have proven to be majorly important to science, including the fruit fly. So, what’s so special about this fly?

One similarity we have with fruit flies, for instance, is in how we fight infections. On many of our immune cells there are proteins called “Toll-like receptors,” which allow our body to detect microbial invaders. They got the name “Toll-like” because they function the same as Toll proteins first found in fruit flies. The “Toll” part is the German word for “amazing” or “weird” because when the German scientist Christiane Nüsslein-Volhard discovered the gene in the flies in 1985, she exclaimed “Das war ja toll!” or “That was really weird!”

But possibly the most iconic example of the fruit fly’s role in genetics, especially to biology students at UK, was its use by Thomas Hunt Morgan in the early 1900s. Born in Lexington, Morgan earned both a B.S. and an M.S. at the University of Kentucky before earning his Ph. D. at Johns Hopkins. He eventually worked at Columbia University, where he would start experimenting with fruit flies.

At the time, the source of genetic information was greatly debated; no one really knew how genes got passed down from generation to generation. But with the help of some flies and a mutation that gave them white eyes, Morgan and his team demonstrated, through the passing down of this white eye trait, that genetic material is in chromosomes. Though today this seems like basic knowledge, this was a pretty groundbreaking discovery and it earned Dr. Morgan a Nobel Prize. Since then, seven other Nobel Prizes have been awarded for research using fruit flies.

Fruit flies have been and continue to be big in research. It just goes to show how one odd animal can serve an unexpected purpose in our understanding of life. So, the next time you’re about to smack a fruit fly dead on your kitchen countertop, just think for a second about the impact fruit flies have had on science. (And then definitely kill it because it will lay hundreds of eggs all over your bananas.)