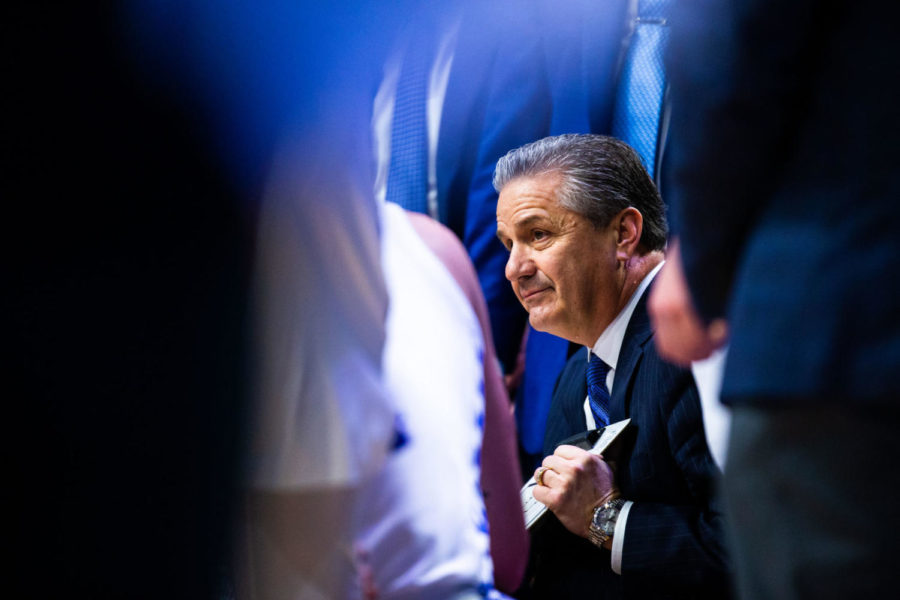 Kentucky head coach John Calipari discusses a play with his team during a timeout in the game against Florida on Saturday, Feb. 22, 2020, at Rupp Arena in Lexington, Kentucky. Kentucky won 65-59. Photo by Jordan Prather | Staff

After being linked to seemingly every notable big in the transfer portal, Coach Cal has finally landed his man.

“I just didn’t feel like I could be at my best by returning to Wake Forest,” Sarr said in his post. “BBN, I can’t wait to get started.

The decision comes after new Wake Forest coach Steve Forbes, formerly of East Tennessee State, appeared to bash Kentucky’s academics in a radio appearance earlier this week in a pitch to retain the seven footer from Toulouse, France.

“Why would you go to Wake for three years and put all that time in to get this prestigious degree, then get your degree at a place like Kentucky?” he said.

Forbes later said he meant no disrespect to Kentucky, but that didn’t stop the oncoming wrath of Big Blue Nation. Coach Calipari’s daughter Erin and football coach Vince Marrow both chimed in on the matter:

Sarr averaged 13.7 points and nine rebounds per game for the Demon Deacons last season in more than 26 minutes per contest. His massive improvement from his sophomore season helped earn him Third-Team All-ACC honors:

Sarr is not a graduate transfer, so he is not immediately eligible despite being a senior. But because Wake Forest fired their coach from last season (Danny Manning), it’s expected that he will be able to get a waiver to play this year.

He fills a major need below the rim for the Cats, who just lost Nick Richards and EJ Montgomery to the NBA. The combination of him and Keion Brooks Jr. could have Calipari and staff salivating in anticipation for 2020-2021.