What’s next for the UK cheerleading team 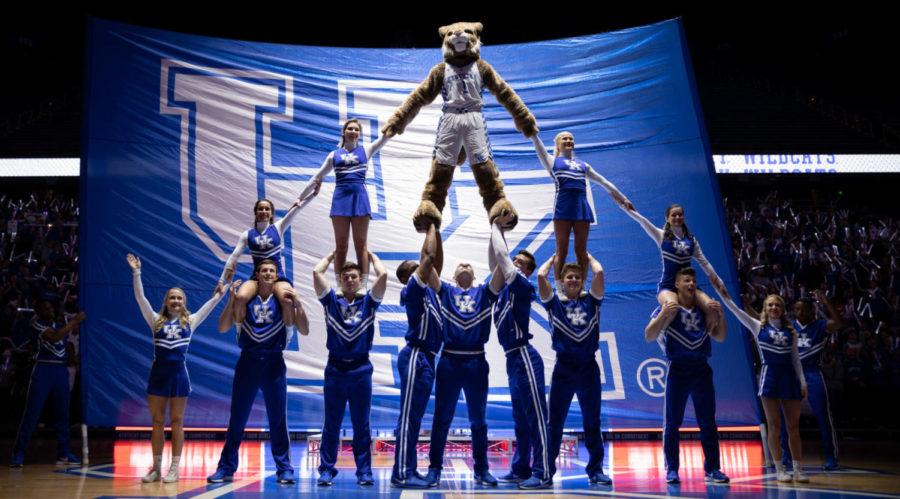 UK's cheerleading team making a pyramid during ESPN College GameDay at Rupp Arena on January 26, 2019, in Lexington, Kentucky. No. 8 Kentucky men's basketball takes on No. 9 Kansas at 6:00 PM. Photo by Michael Clubb | Staff

One month ago, the coaching staff of the UK Cheer was fired and its operations integrated with UK Athletics in the wake of a hazing investigation. The move to athletics and the investigation process have prompted many questions about the future of the team, which is a 24-time national championship program. The Kernel spoke with UK spokesperson Jay Blanton to answer some questions about the cheer team moving forward.

Was the integration motivated by Title IX?

In 2019, two UK students, Lisa Niblock and Meredith Newman, sued UK by saying the university had violated Title IX, a federal law mandating that colleges provide equal athletic opportunity to men and women. Their evidence showed that in the 2017-2018 school year, the student body was 55% female, but the population of student athletes was only 41% female, showing a disparity of 183 female athletes. Now that cheer will be under the administration of UK Athletics, the ratio of male to female athletes will change, an adjustment that falls under Title IX rules.

However, Blanton said that UK Athletics’ decision to integrate UK Cheer into their program was not an effort to resolve this disparity.

“Cheer is not an NCAA sport and we don’t believe is considered as part of Title IX efforts,” Blanton said. “That issue was not a motivating factor for this move. It was, as the President and others outlined last week, our responsibility to ensure a culture of compliance and infrastructure and support for cheerleading.”

The 2019-2020 cheer roster listed 30 men and 24 women; women make up 44% of the team. Therefore, the addition of UK Cheer under UK Athletics would not fix the gender disparity at the core of the lawsuit by equalizing the ratio of male to female athletes at UK.

Additionally, a federal judge ruled in 2010 that universities cannot consider cheerleading with their other sports when evaluating Title IX-related gender balances, a ruling that was upheld in 2012.

Who will lead the team?

Executive Associate Athletics Director Sandy Bell is currently leading a committee to select a new coaching staff. She is collaborating with UK Athletics and “a number of people across the country in cheer,” according to Blanton.

The committee has not yet decided if some of the coaching positions will remain unfilled due to the coronavirus pandemic. However, Blanton did confirm that T. Lynn Williamson, UK Cheer’s former faculty adviser, will not be replaced, as the transition of UK Cheer from a club sport to a UK Athletics organization requires that the faculty adviser position be eliminated.

No date was given as to when the new staff will be announced, though Blanton said the committee was “moving quickly” in their search.

How will UK Cheer’s budget change?

UK Cheer’s new coaches will collaborate with UK Athletics to draft a cheer budget for the 2020-2021 season.

Historically, the cheer team has paid salaries to a head coach and several assistant coaches, as well as a cheer adviser. These individuals reported to the Vice Chancellor for Student Affairs, not the athletic director. However, a portion of the cheer program’s expenses are included in the annual UK Athletics budget, so the program was not completely independent. Last year’s budget was just under $485,000. Blanton said that the addition of a cheer budget will not decrease the money available to other sports.

There is also the possibility that the new cheer coaches will experience a major pay raise. According to data collected from the U.S. Department of Education, the average salary for a head coach at UK in the 2018-2019 season was over $976,000, and the average salary for an assistant coach was over $185,000. These averages are most likely a little innacurate, skewing high because of outlying high salaries for football and men’s basketball coaches included in the data set.

However, 2019 salaries for the rifle coaches – rifle was UK’s only coed team at the time – were nearly $143,000 for head coaches and nearly $68,000 for assistant coaches. If the staff of the coed cheerleading team is paid a similar amount, it would be a major increase from the combined $45,000 salary of the four former coaches.

In addition to funding from the Athletics Department, money from the President’s office has historically paid for 16 annual scholarships matching the price of in-state tuition to Blue squad members.

Several endowments, altogether exceeding $50,000, have also been established by individual donors and private funds to award members of the cheer squad with scholarship money based on academic records and financial need.

Previous scholarships offered to current and incoming students will most likely still be honored, as Blanton said he was not aware of any changes to UK Cheer’s scholarship program.

How will the program change?

As a student activity not under the umbrella of the athletics department, the UK cheer squad has followed its own policies for decades. The cheer program’s policies already include many of the same policies as UK’s 22 varsity sports, including random drug testing, rules regarding alcohol consumption and GPA and study hour requirements for academic eligibility.

As they join the 22 varsity sports under the Athletic Department’s management, the cheer program will also have to follow additional rules that they may not have emphasized as heavily before. According to the UK Athletics website, these rules include:

1.    No sports wagering in any sport including in the NCAA (March Madness brackets, e.g.)

2.    Practice hour limits. During the season, coaches cannot exceed 20 hours of practice/mandatory activities per week or four hours per day. Athletes must also have at least one day off from mandatory practice per week.  In the off-season, this is reduced to eight hours of weekly practice.

4.    Student-athletes cannot use their name, image or likeness to be used for any promotional reason unless it’s for UK, the SEC or a charitable organizations. For example, student-athletes could not allow a local business like Kroger to use their likeness for advertisement purposes.

5.    Social media rules. According to the social media policy, student-athletes must agree to keep certain content off of their social media platforms, such as sexual references, direct endorsement of businesses or products, mentions of alcohol/drugs or negative posts regarding the University of Kentucky.

What about current team members?

UK’s cheerleaders will be required to attend anti-hazing and anti-sexual harassment trainings. These trainings can consist of videos, workshops and speakers.

The annual team retreat at Lake Cumberland, the site of the alleged hazing, has been cancelled. Blanton was unable to comment on any individual team member’s desire to transfer to a different school.

This story will be updated as more information is available.