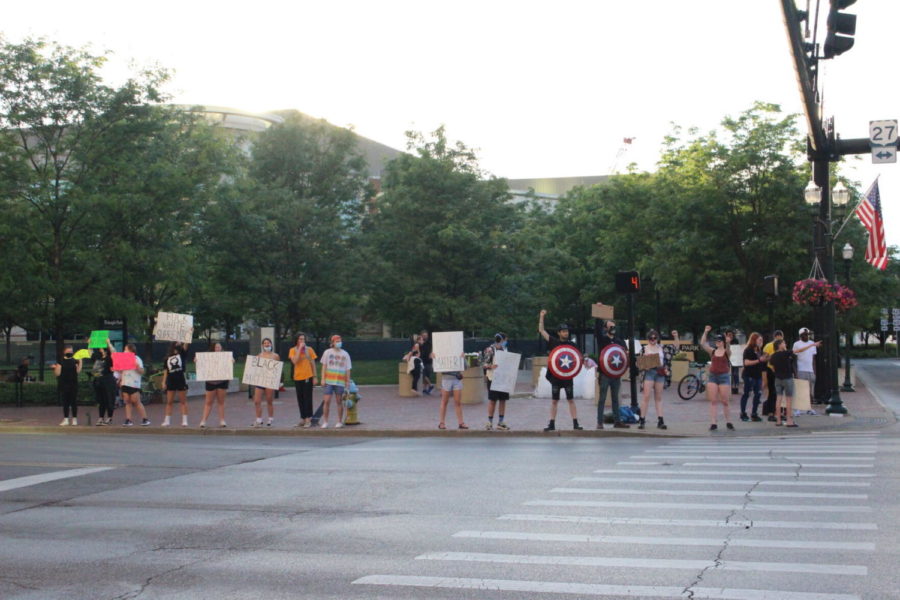 Monday was the fourth consecutive night of Lexington protests regarding recent acts of police brutality towards people of color, in particular the deaths of Breonna Taylor and George Floyd.

A few hundred people gathered in downtown Lexington for the night, a smaller crowd than Sunday’s high of around 1,000 protesters.

Jana Warfield and her family were among the first to show up for Monday night’s protest. Warfield, her husband and their 2-year-old son have only lived in Lexington for about five months, but decided to get involved in the protests as soon as they could.

“We’ve been quiet for too long. We’ve been letting it go for decades, centuries. It’s been going on for years, and just to see that man on live TV get killed, it’s just been going on too long,” Warfield said.

Warfield said her family was balancing their protesting with being out in the pandemic by putting their son first.

“We were out here earlier and it wasn’t so crowded, so we’re fine. We been out here by ourselves, you still hear our voice, you still see our signs. Not so crowded, so social distanced,” Warfield said. She added that they would leave if things got too crowded.

The first protesters began gathering around 6:30 p.m., prepared with snacks, water and cardboard signs for sharing.

From 7 to 8 p.m., more protesters joined the small crowds forming at both Triangle Park and courthouse plaza. The two sites were the main focus of Monday’s protests, with participants marching between the two.

Lexington’s protests have been mainly peaceful, an atmosphere that was retained Monday night.

Friday and Sunday nights’ protests were organized by Cooperation Lexington, a local organization that has hosted numerous community events on police accountability and citizen’s rights. But on Monday night, protesters said there was no single organizer or organization behind the gathering.

Some protesters had formed organized units, like Katheryn Dickey and Daniel Coolbear, who set up a first aid station with water and various supplies in case of emergency. The pair said they had organized roving first aid with a group of about 20 medics after Saturday night’s protest.

Dickey had found a protester, Cynthia Unique, having a panic attack in the crowd during Saturday night’s protest. Afterwards, Unique and the pair decided to organize a first aid station to keep people safe during future protests.

So far, Dickey and Collbear said that band-aids were the most anyone had needed. The pair said they felt like the Lexington protests were making good strides.

“I’m kind of excited that it’s been doing so well here, like the police kneeling last night was a really good show at the end of it,” Coolbear said.

Dickey and Warfield both said that change was needed for the protests to end.

“Change the ways,” Warfield said. “I shouldn’t fear. If a police gets behind me, I fear he might kill me or do something to hurt me and take me from my son or his daddy, for instance.”

Dickey said she felt like police stations needed to have an atmosphere of accountability, and that the biggest thing at the moment was for elected officials to take the protests seriously.

Compared to other protests across the nation, Lexington’s protests have been marked by relative cooperation between protesters and police.

Around 8 p.m. at the Courthouse Plaza, several protesters had a conversation with Officer Megan Padgett before the marching began.

“Overall, last night everybody was pretty respectful,” Padgett said of Sunday’s night’s protest. “I think there were a couple people throwing water bottles down here but the crowd pretty much policed those people themselves.”

Padgett came on her day off as part of Lexington PD’s determination to be prepared for anything. She said she had a few good conversations with protesters throughout Sunday night.

“Everybody here has been really, I guess, organized and very good about wanting to be peaceful here,” Padgett said.

Around 8:30 p.m., protesters from both locations joined at Triangle Park to begin marching.

The marching lasted for most of the rest of the night. The route appeared disorganized and unplanned, turning back on the same streets often. As the protesters wove through downtown, many streets were open to moving traffic. On a few occasions protesters or police cars blocked a road.

Marchers chanted numerous phrases including “hands up, don’t shoot”, “no justice, no peace” and “I can’t breathe.”

Protesters called for justice for several individuals such as George Floyd, Breonna Taylor, and David McAtee, an African American man who was shot and killed in Louisville the night before.

Some protesters served as de facto leaders, guiding the crowd along the streets of downtown Lexington.

Protesters stopped on several occasions to kneel or lay down in the street, usually for around a minute at a time.

The police presence was felt, but officers did not attempt to stop protesters’ marching or chanting.

The crowd found their way back to Triangle Park around 9:30 p.m., where several protesters gave impromptu speeches on top of one of the concrete pillars.

Around 9:45 p.m., the protesters marched down to the police station, where police officers stood in a line in front of the entrance. Protesters chanted “take a knee” and “walk with us.” At first, the officers stood their ground and did not react.

Eventually, a few protesters went up to individual cops and began speaking one-on-one. While the group of officers did not take a knee, a handful of officers accompanied the crowd when it left the station.

The group then congregated at Triangle Park again, where around a dozen or so police officers knelt with protesters.

At one point, protesters in the group single-out two officers in the back who were still standing and asked them to kneel with the rest of the crowd.

One officer said, “sorry, I’m just old,” as his kneeling lagged behind the group.

After several moments of kneeling around 10:15 p.m., the crowd including the officers stood up and began praying together.

At several points during the night, a small amount of participants attempted to antagonize police and encourage violence, but the majority group would simply ignore these ideas or outright discourage them.

One woman in the crowd yelled, “Don’t give them a reason to attack us.”

Around midnight, one protester – Kaulbert Wilson – was arrested on several charges, including disorderly conduct, inciting a riot, 4th degree assault (no visible injury) and evading police.

Earlier in the night. Wilson told the Kernel that he had previously been detained by police during Sunday’s protests.

“We’ve all been peaceful, but for us to actually have officers walking with us, we’ve spoke and they’ve heard. So therefore, this, officers following us, that should mean something,” Wilson said.

Protests are expected to continue in the coming nights.