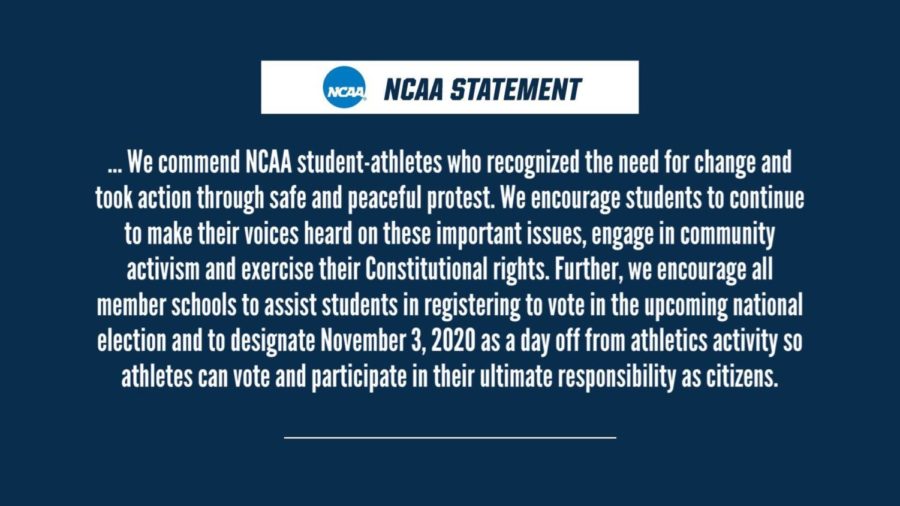 Earlier this afternoon, the NCAA Board of Governors released a statement on Social Activism in which it put out a call to action of sorts for its member schools and expressed support for student-athlete participation in “safe and peaceful protest.”

“We commend NCAA student-athletes who recognized the need for change and took action…” the statement reads. “We encourage students to continue to make their voices heard on these important issues, engage in community activism, and exercise their Constitutional rights.”

“Further, we encourage all member schools to assist students in registering to vote in the upcoming election and to designate November 3, 2020 as a day off from athletic activity so athletes can vote and participate in their ultimate responsibility as citizens.”

The full statement can be accessed via the link in the tweet below:

Voter suppression has become a major topic in recent days after reports of long lines, machine problems and a lack of ballots – among other issues – in areas with a large percentage of minorities in the primaries of Georgia and other states. Areas with a larger white population in those states reportedly did not experience the same issues, or experience them to a similar extent.

This led NBA superstar LeBron James to partner with other notable black athletes and entertainers to form an organization titled “More Than a Vote”, which will be focused on getting African-Americans to register to vote and participate in elections.

The NCAA’s announcement comes on the eve of an on-campus protest at Clemson University tomorrow, led by the presumed No. 1 pick of the 2021 NFL Draft, quarterback Trevor Lawrence.

Kentucky’s football team participated in a march through Lexington last week in support of the fight against social injustice. Many of the university’s athletes have spoken out individually as well.