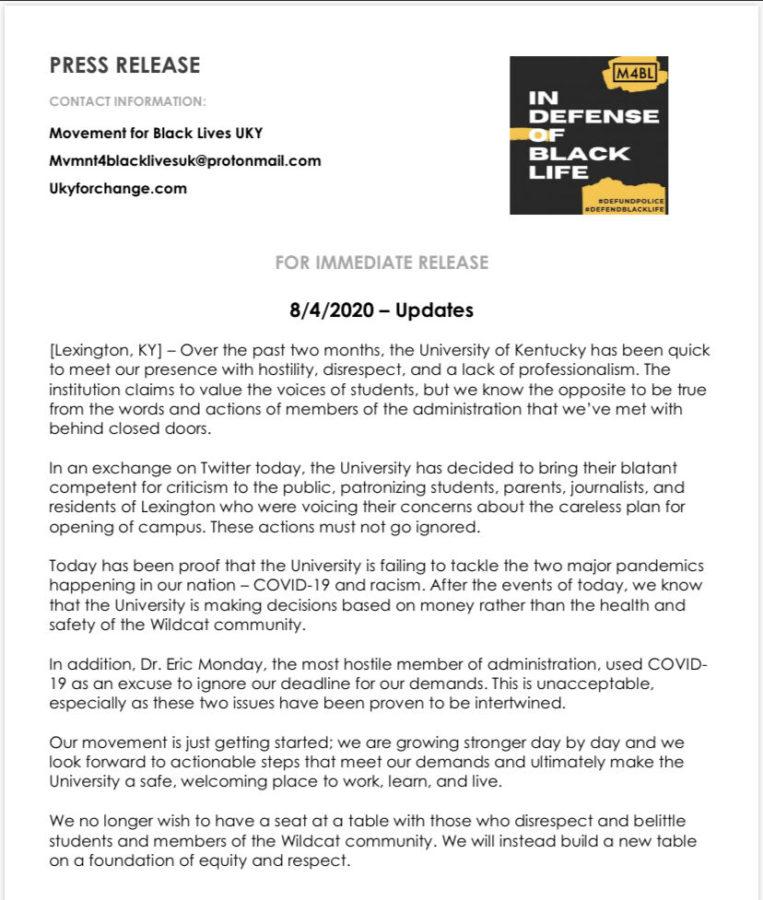 Movement for Black Lives UKY's statement regarding the events of Tuesday afternoon.

As the university concluded its second day of COVID-19 testing for returning students, UK’s official Twitter account engaged in a Twitter exchange with a newly-formed group that caught the attention of many and drew backlash against the university from some community members.

In the thread, the student group alleged that UK is not taking the safety of the entire campus as seriously as they should, since they aren’t requiring testing for faculty and staff, reducing class sizes or addressing deeper issues. In several Tweets, they added that UK seemed more focused on money than their students.

“(UK) changed classes in the middle of the night and trapped students into housing agreements where they have classes all online,” the student group said in the thread. “UK is quick to grab up cash from students through these entrapments of housing agreements and these exorbitant fees for distance learning.”

Students’ myUK accounts were updated to reflect their individual course breakdown (traditional, hybrid or online) the day after the housing deadline that held returning students responsible for 100 percent of their housing contract.

The Twitter account is run by the Public Relations and Strategic Communications department, according to UK spokesperson Jay Blanton.

Movement for Black Lives UKY clarified that their issue wasn’t with the testing itself, but its frequency.

Several other accounts commented on the student group’s Tweet, including Lexington Herald-Leader reporter Linda Blackford, who commented “#magicalthinking” under the post.

UK addressed both Blackford and Movement for Black Lives UKY’s comments by detailing their daily screening plans for the fall semester.

Blackford said that the “magical” part of UK’s plan is the hope that students won’t engage in party culture once they’ve returned to campus.

Another commenter Tweeted, “Or the fact that by the next day(possibly even same day) the results of said test can be rendered useless,” to which UK replied that they would hold students accountable for their own health.

MBL’s tweets focused on UK’s willingness to trust students to behave responsibly without incentives or enforcements.

UK’s Twitter account responded with “Interesting that we have more faith in your fellow students than you do.”

Students and community members reacted strongly to the statement, with some labeling it “chiding,” “insensitive” and “unprofessional.”

Some social media users said the tone of the university’s Tweets belittled the fears and concerns of its students.

UK spokesperson Blanton said in a statement that nothing is more important to UK than the health, safety and well-being of the community. He added that UK encourages its students to ask the university tough questions and express their concerns.

“That’s the kind of exchange, debate and dialogue we can and should encourage among our students, who are incredibly bright and driven,” Blanton said. “Students have every right to question the plan we’ve put in place. And the university has an obligation to state its goals and state the facts about what we are trying to do to make it as easy as possible to be safe.”

Later Tuesday afternoon, in a Tweet separate from the original thread, Movement for Black Lives UKY said that the exchange served “to put less faith” in UK.

UK ended the conversation with a Tweet attempting to find common ground with the student group and those who interacted with the thread.

Movement for Black Lives UKY said in a statement that the way UK presented itself publicly on Twitter Tuesday afternoon resembles the attitude they’ve come to expect from the institution behind closed doors.

MBL criticized the university out for failing to adequately address COVID concerns and racism within the UK community, including allegedly using the pandemic as an excuse to not meet the deadline for the student group’s recent demands regarding racial equality.

“We no longer wish to have a seat at a table with those who disrespect and belittle students and members of the Wildcat community,” the organization’s statement reads. We will instead build a new table on a foundation of equity and respect.”