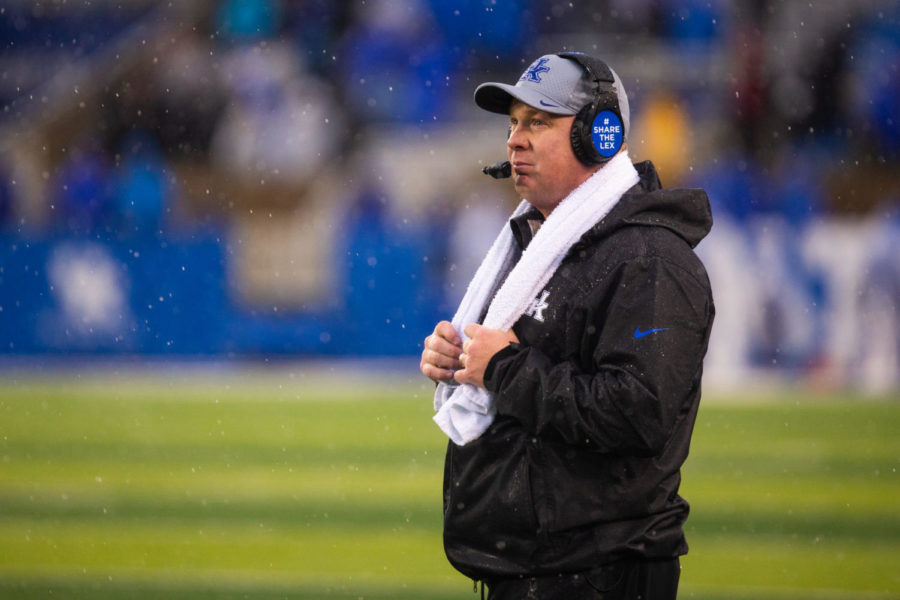 After making the dramatic and – to some – polarizing statement on Thursday by walking out of practice, the UK football team was back on the field ready to continue preparation for Auburn.

In light of the move, and everything else happening in society these days, Mark Stoops was asked about how the mental health of his student-athletes will be monitored and protected. As always, the head coach demonstrated the effort is being made for his players’ wellbeing in all aspects of life.

“We’re constantly counseling, monitoring and spending time with our players,” Stoops said. “That doesn’t mean that we know exactly what’s going on in every young man’s head or in their life. But I promise you, we talk to them often… part of our leadership development program is we spend a lot of time with our players talking about things other than football.”

In talking about football, however, Stoops seemed eagerly impressed with what he’s seen on the practice field, including the team’s second intra-squad scrimmage today. He specifically noted the men in the trenches have been imposing during this modified summer camp.

“I got one of the best sack returners [Boogie Watson] coming back and that’s who I want to go against every single practice,” Young told reporters. “To go up against those guys every day and test what I can do makes me push further and deeper every single day and be better… if I know I can win against those guys I can win against anyone in the nation.”

Young primary objective this extended camp opportunity is to work on his pass blocking so he can help protect his quarterback’s – whoever it may be – blindside. Young’s insight points to Terry Wilson, who has been impressive so far in camp.

“I think this time off has been really beneficial for him,” Young said. “I see a guy out there that’s super confident. I see a guy that’s moving really well, has really studied his playbook and really got back into the game.”

“[Terry] definitely looks comfortable,” Coach Stoops commented. “I’m pleased with live bullets flying around him. Certainly he wasn’t going to get hit, but you still have some big defensive linemen and blitzes and pressures. He looked comfortable both stepping up in the pocket and delivering the football but also pulling it down and scrambling and buying time to throw the ball down the field or to pull it down and run.”

While players like Young and Wilson are given senior designation, every player on the roster, no matter the class, has an extra year of eligibility due to the NCAA rulings on fall sports last week. Stoops has had preliminary conversations with players about a potential fifth year, but doesn’t believe at this point that many seniors, if any, will exercise it.

“I think most of the time by the time they’re a senior, whether they’ve been here four years or five years, they’re ready to move on,” Stoops said. “They’re either going to be good enough to play in the NFL or have an opportunity in the NFL or earn their degree because we do a great job at preparing our guys for life after football. I think a lot of them would be ready to move on with their life.”

“However, if there are guys that want to come back, I would welcome them with open arms because [we have] a lot of good football players and a lot of good human beings.”

Editor’s Note: This piece was originally published on Saturday, August 29th. Technical difficulties prevented it from saving and uploading appropriately.