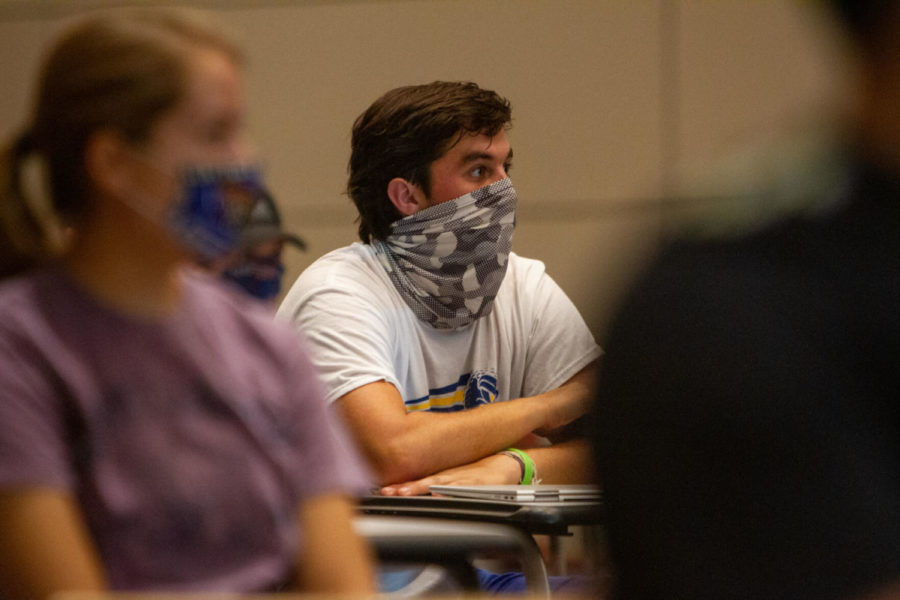 A student in Timothy Taylor’s Intro to Construction Engineering sits at a desk in the Grand Ballroom on the first day of in-person classes on Monday, Aug. 17, 2020, in the Gatton Student Center in Lexington, Kentucky. Photo by Jack Weaver | Staff

Classes for the fall semester at the University of Kentucky resumed two weeks ago, ushering in a new normal for everyone on campus. The semester began with mandatory COVID-19 testing for all students, daily health screenings and virtual K Week events.

Every student is reacting to the changes in their own way.

For freshman engineering major Jackson Poynter, keeping himself safe has been the main priority while on campus.

“I always have my mask, wipes in my bag. I only come here twice a week so I try to stay home the rest of the time,” Poynter said.

Other students have made note of how different this semester is than previous years.

Senior ISC major Jake Patneau is back on campus for the first time since leaving in March.

“It’s been chaotic, but not too bad. Seeing all these people, it’s kind of crazy,” Patneau said. “Last semester I was going to at least three classes a day, now it’s maybe one or two. The biggest change is online and getting use to all of the new software.”

Part of UK’s reopening plan was a three-modality system, with classes offered in-person, online and a hybrid between the two.

Brianna Gunter, a freshman majoring in social work, said online classes are a struggle for her.

“It’s really important for me to have face-to-face contact with my teachers,” Gunter said. “It’s just easier for me to learn, trying to do stuff online with Zoom and all that gets confusing.”

Gunter believes the steps that UK has taken to stop the spread of COVID-19 have helped keep numbers down throughout campus, despite her feelings toward the online classes.

“I know UK is doing a lot by having you wear masks, offering a lot of sanitation for every student.” Gunter said, “They’re offering resources for people who forget their mask so that they can be in class. It makes me feel like we can finish out the semester in-person with the whole system UK has going on.”

Some universities around the country – like UNC, Michigan State and Notre Dame – have already reverted back to online courses for undergraduate students.

Students acknowledge the reality that, like other universities, UK could shut down because of rising case numbers.

“I have heard that there’s been party groups that have been forming on the second day that have already started making plans for parties,” Poynter said. “Things that would be normal in college, are just not at this point.”

Patneau was also concerned about the normalcy of the college experience, especially for students who are just beginning their college years.

“I’m worried for the people living in the dorms. I hope that works out for them because they just moved in,” he said. “For some, it’s their freshman year probably, so like I had a great freshman year, but with COVID going on, I hope they can too.”

UK reopening hasn’t just affected the students; faculty and staff have had to adjust their work, making plans for teaching on an altered schedule and with new technologies.

Dr. Erik Myrup, an associate professor of history, had his own concerns about how well online courses would work going into the first day of classes.

His priority is to his students first, and that starts with the technology.

“I’m trying to ease in, in a way that lets me make sure that I don’t have a bunch of kids show up and not be able to get anything out of it because technology is working,” Myrup said.

Myrup said he has had several instances where students have been kicked off Zoom meetings because of faulty internet connection. In his classroom, flexibility is the key.

“There has been a lot of footwork trying to accommodate students in the midst of this, a lot of students are very frustrated because there’s so much they weren’t aware of,” Dr. Myrup said, “In the history department we’ve really tried to do a lot of work to accommodate those students.”

Dr. Myrup decided to teach the first day of his courses all via Zoom. One of his classes has 175 students.

“The largest rooms could accommodate fifty to sixty people. Eventually next week, I’ll start rotating kids in to watch in-person and the other kids will be watching real-time, but while it’s broadcasting, but remotely,” Myrup said.

Only one week in, adjustments are still being made, even on behalf of the university. But for now, students and staff are focused on figuring out classes and doing what they can to keep themselves safe.

“There’s always that slim minority that are always going to be those rebellious types, whether it’s for better or for worse,” said Poynter.