Bruiser Flint ready for anything and everything as he joins BBN 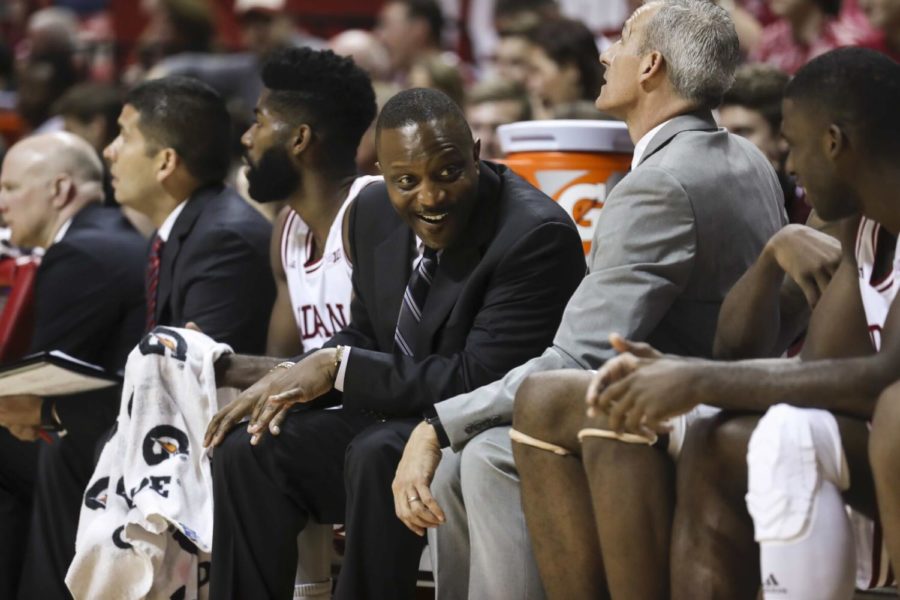 BLOOMINGTON, IN - NOVEMBER 05, 2017 - Indiana Hoosiers Assistant Coach Bruiser Flint during the exhibition game against the University of Indianapolis Greyhounds and the Indiana Hoosiers at Simon Skjodt Assembly Hall in Bloomington, IN. Photo By Craig Bisacre/Indiana Athletics

At his introductory press conference Wednesday afternoon, Bruiser Flint was asked to share a tale about what he deemed a “crazier version” of John Calipari from when they coached together many years ago. Without hesitation, he threw his head back and vigorously started laughing.

The newly hired assistant didn’t give the media any specific stories, but did indulge on a slight change Coach Cal has made over the past three decades.

“He never sat down at UMass,” Flint said. “Back then, you didn’t have all these rules. We’d practice for five or six hours; we would come back and would have four or five practices a day. You’re not allowed to do that anymore.”

“I watch him a little bit even before I came on… he’s a lot more patient with the guys.”

Flint originally joined Calipari’s staff at UMass ahead of the 1989 season and was a critical asset to the Minutemen’s success of the mid 90’s, when they were able to reach a Final Four and grab the country’s number one ranking. He played a crucial role in the development of National Player of the Year winning big-man Marcus Camby.

Bruiser amassed an 86-72 record over his five-year tenure as the head of the bench in Amherst, getting promoted after Calipari dashed off to the NBA. Getting tasked to take over a program that all of a sudden had incredible preseason expectations is no easy feat, but he managed to find success.

He then returned home to Philadelphia, working a 15-year stint at Drexel before taking a year off to gather himself and reconsider his options in the coaching world.

“If I’m being honest with you, I never thought I’d be an assistant coach again,” Flint said. “One of the things [Archie Miller] would do was he would bounce some things off me that he may not have done with the other guys on his staff because of [my] experience.”

Bruiser spent the past three seasons as an assistant on staff at Indiana, serving a major role next to Miller while being fully integrated in recruiting. He was part of the Hoosier’s pitch that secured All-American guard Romeo Langford before the 2018 season.

Despite the level of responsibility and importance he had in Bloomington, it seemed Miller wasn’t hesitant to let Flint join up with old running mate.

“When I called Arch, he just laughed because they actually went through Cal to get me to coach for Arch,” Flint said. “My relationship with the Miller’s is through Cal, so there was nothing to be said actually.”

Bruiser made sure to mention that the fans at Indiana have the blue-blood culture and nearly the same expectations for greatness as Kentucky, adding he’s fully prepared for the spotlight in Lexington.

“[Calipari’s] resume is incredible, so the expectations are going to go with it,” he said. “I have no problem with it, that’s part of the program and you got to approach the job that way.”

In terms of his duties at Kentucky, Cal made clear that he doesn’t want to limit Flint to any certain role. Flint has an extensive history of being able to groom big men, but the man himself pointed out he’s had an all-league guard every year he’s been a head coach. Calipari talked about the man Flint is replacing (Kenny Payne) working late nights with Tyler Herro and Devin Booker, and he seems intent on giving Bruiser the same kind of freedom.

“We all recruit together,” Coach Cal said pretty bluntly. “I want my guys to coach basketball.”