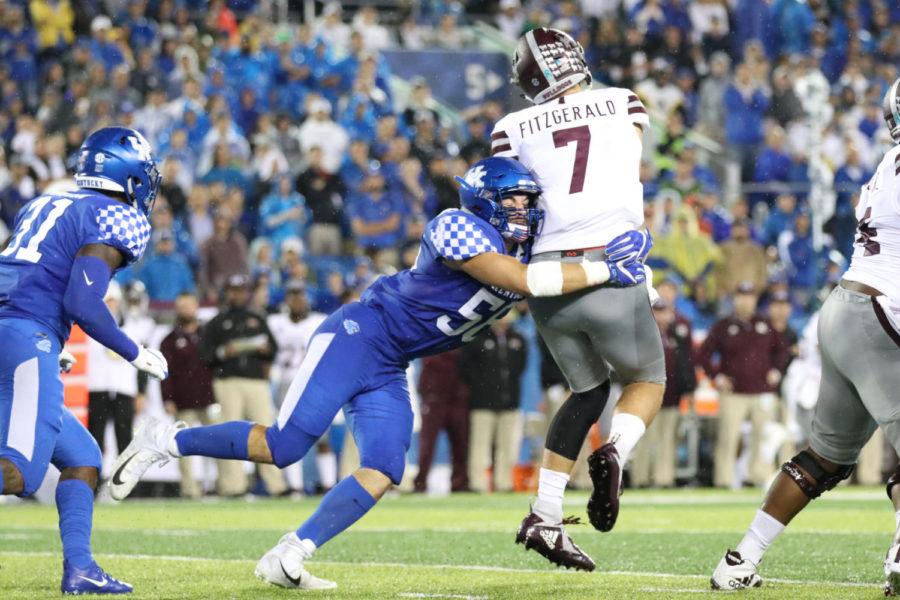 Kash Daniels attempts to sack the quarterback during the game against Mississippi State on Saturday, September 22, 2018 in Lexington, Ky. Photo by Chase Phillips | Staff

Kentucky fell to 0-2 after an overtime thriller against Ole Miss in Lexington last weekend. This weekend, the Wildcats will take on Mike Leach and the Mississippi State Bulldogs.

Leach introduced the Air Raid offense, an offensive, pass-based scheme with little running, back into the SEC. In his first season back in the SEC since 1998, Leach has notched a signature win against the defending national champion, LSU Tigers.

Leach’s last stint in the conference came while coaching at Kentucky. The Air Raid that he and then head coach Hal Mumme showcased in Lexington allowed quarterback Tim Couch to be drafted number one overall in the 1999 NFL Draft.

The Air Raid works just as effectively 22 years later. In their first two games, Mississippi State quarterback, K.J. Costello has thrown for 936 passing yards. In their first game against LSU, Costello threw for 623 yards in the upset victory. Comparatively, Kentucky has gained 943 yards in total offense this season.

Kentucky has had a tough time stopping the passing game through two games this season. Kentucky’s secondary has allowed 553 passing yards and seven touchdowns through the air. In 2019, the Wildcats defense allowed seven passing touchdowns throughout the whole season.

The strength of the Kentucky defense is stopping the run. They held Auburn to under 100 yards on the ground in the season opener and kept Ole Miss to under four yards per carry last weekend.

Kentucky’s problem is that Mississippi State passes the football on average 60 times per game.

Offensively, the Wildcats found their rhythm in the running game last week against Ole Miss, rushing 56 times for 408 yards. Quarterback Terry Wilson, Christopher Rodriguez Jr. and Asim Rose found themselves all with over 100 yards on the ground on Saturday.

Mississippi State has kept each team they’ve played so far with under 90 yards rushing throughout each contest. Their run-stop defense versus Kentucky’s smash mouth style of football will be the deciding factor for Saturday’s game.

The Bulldogs will no doubt throw the ball the majority of the game. This will give Kentucky’s secondary many chances for redemption for their slow start to the season. Through Mississippi State’s two games, Costello has thrown five interceptions, including three last week against Arkansas.

If the Wildcats defense can get takeaways and give the ball to the offense, Kentucky has an opportunity to pick up their first win of the season. Kentucky averages 36 minutes of offense per game this season. With long drives and keeping the high-powered Bulldog offense off the field is key for Kentucky this weekend.

The Bulldogs and the Wildcats last met in September of 2018. UK won 28 – 7 on the back of Benny Snell’s four rushing touchdowns, a Kentucky career record-breaker.

Mississippi State will come to Lexington to play the Cats on Saturday, Oct. 10 at 7:30 p.m. The game will be available to watch on the SEC Network.