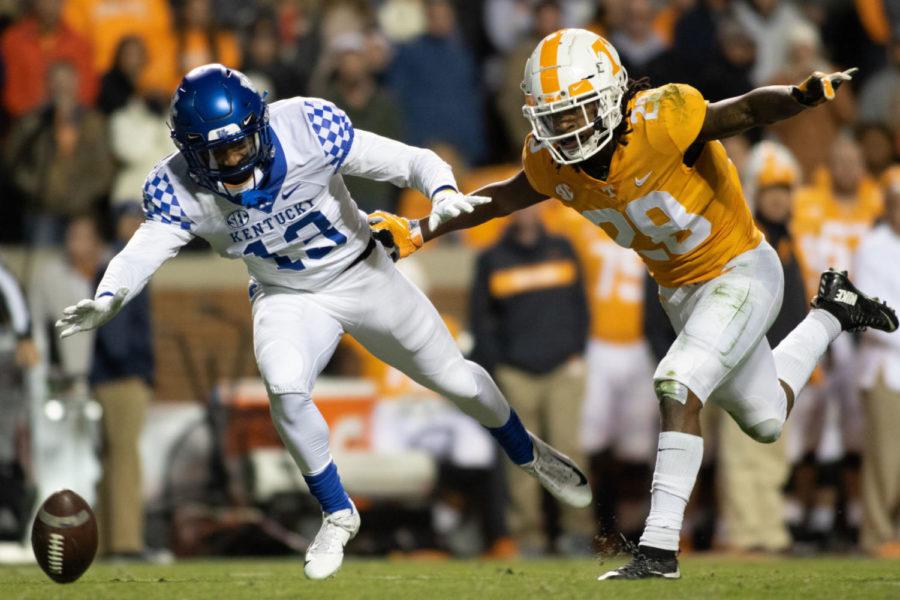 Kentucky will travel to Knoxville this Saturday for a date against the Tennessee Volunteers.

The Wildcats picked up their first win of the season on Saturday against Mississippi State, 24-2, because of a stellar performance from the Kentucky defense. The defense recorded six interceptions and gave up no offensive points on Saturday.

Tennessee comes into the border battle off a 44-21 loss to Georgia. Volunteer quarterback Jarrett Guarantano had three fumbles, two of which were recovered by Georgia, and an interception.

That’s music to the ears of Kentucky’s defense, which thrived on turnovers to set up the Kentucky offense with good field position several times throughout the Mississippi State.

“When technique and opportunity meet, you’re going to have a chance to make plays,” Kentucky head coach Mark Stoops said of the first season victory.

Executing defensively for Kentucky and exploiting any opportunity the opposing offense gives paved the way for the Wildcats to win last week. Saturday’s defensive redemption for Kentucky has let the offensive performance fly under the radar – that shouldn’t be the case.

Kentucky’s offense has been inconsistent early this season. While they were able to rush for 408 yards two weeks ago against Ole Miss, the Wildcats had 157 total offensive yards against Mississippi State.

Kentucky only rushed for 84 yards last week, their worst rushing performance of the season so far, and with only 73 yards through the air as well. After the strong their defensive performance last week, there’s more pressure on the Wildcat defense than ever.

Fortunately for UK’s run-first offense, Tennessee allowed Georgia to record 193 rushing yards. The Bulldogs won the ball game up front, inside the trenches, and it showed on the scoreboard.

Kentucky’s offensive line has to step up this weekend. They gave up two sacks and six tackles for loss against Mississippi State and that won’t cut it against Tennessee.

The key to win for Kentucky is balance, something they haven’t had yet this season. If the defense can keep the Tennessee offense off the field and the offensive line plays like they did in the first two games of the season, Tennessee could be looking at an upset.

All the same for Kentucky, if the defense gives up long drives and Tennessee controls the time of possession – it could be a long afternoon for the Wildcats. With an offensive line as good as Tennessee’s, it could create some trouble for Kentucky’s front four on the defensive side of the ball.

Kentucky will look to defeat Tennessee for only the third time in 36 seasons; the last two wins happened in 2011 and 2017, respectively. The Volunteers won all 26 games between 1982 and 2011.

In their most recent match-up in 2019, Tennessee defeated the Wildcats 17-13 after the Volunteer defense stopped Lynn Bowden on 4th and goal at the 2-yard line with 1:17 left in the ball game.

Kentucky will play Tennessee inside Neyland Stadium this Saturday, Oct. 17 at noon on either ESPN, or on the SEC Network.