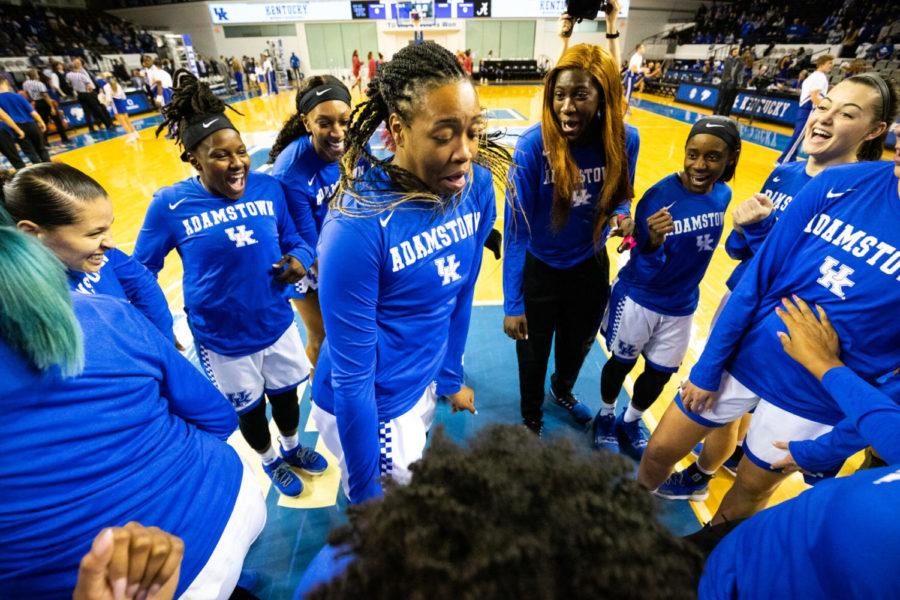 Throughout the offseason, this team’s expectations have been extremely high.

Barkley: It doesn’t. This is arguably the best team to come through Lexington in a long time. The talent level present can win games no matter the coach. I’m sure some players took the news harder than others, but they’ll all be ready to go come Nov. 25.

Eric: Over the long-term, no. It’s not like there was an entire staff overhaul; familiarity between coaches and players still exists, so we’re going to get the best out of these women. It impacts the first few games though. No matter how similar Elzy and Mitchell are, it’s not easy to switch head coaches this late in the offseason. Ultimately, this team will go where Rhyne Howard carries it.

Kyra Elzy has never been a head coach at the college level before, but spent her college playing career and the last 12 seasons of her coaching career in the SEC (Eight in Lexington). Do you expect any major adjustments from Coach Mitchell’s scheme and/or general philosophy now that she’s the leading lady?

Braden: Elzy revealed the team had already “installed a lot of things that we have run in the past” in her introductory presser, but also mentioned adding “more quick hitters” as the season approaches. I interpret that to mean fast-developing actions to free up shooters and slashers, which should keep the offense from being overly reliant on Rhyne Howard. She also seemed excited about the possibility of scoring in the paint, saying “unlike last year, we have post presence… we truly can play inside-out.” So, I’d expect to see a healthy number of touches on the low block for frontcourt players. Neither of those are ‘major adjustments’ per say, but they’ll help the offense avoid sputters.

Barkley: Following Mitchell’s departure, Elzy spoke about maintaining a tough defensive philosophy and continuing to recruit versatile players like her predecessor. Since she has been an associate head coach under Mitchell for so long, I expect more of the same scheme this season.

Eric: I don’t expect any major changes. The offense ran through Rhyne Howard as a sophomore, and it will with her as a junior too. The only adjustment I could see is Chasity Patterson getting a larger piece of the pie instead of serving as the sixth-woman again.

Who do you see stepping into the Robin role alongside Rhyne Howard’s Batman?

Barkley: We saw Chasity Patterson play a huge role for Kentucky in the 19 games she suited up last season. She was the SEC Sixth Woman of the Year and is a great scorer. Another woman who could be ‘Robin’ is freshman Treasure Hunt. She has the makings of a superstar. Any combination of those three in your backcourt is hard to rival.

Eric: It’s Patterson’s gig to lose. The former McDonald’s All-American is due for an impressive season. As Barkley mentions, don’t sleep on Hunt making a big impact.

Braden: With Elzy’s giddiness on the potential for paint domination, give me Dre’una Edwards. The 2018-19 Pac-12 Freshman of the Year racked up 11.6 points and 6.7 rebounds per contest at Utah, scoring in double-figures 18 times in the process. Newly eligible, she should feast underneath for the Cats. Maryland transfer Olivia Owens, a five-star recruit in the 2018 class, could also fill the void.

Speaking of Howard, she was named UK’s first AP Preseason All-American on Nov. 12, making the team unanimously. Do you think the Cats need her borderline heroic contributions to stay near the top of the country, or will increased depth allow her to take on a lesser burden?

Braden: Depth will provide Howard the luxury of conserving energy and turning up the intensity when necessary. While she’ll still post quality numbers, she won’t need to lead the team in rebounding again or take more than double the shot attempts of her next closest teammate (490; Sabrina Haines was second with 232). This squad is uber-talented, and will be able to consistently create when Howard isn’t at her best, which last year’s team couldn’t do.

Eric: The team won’t need her in the same fashion. The Cats really struggled to create a cohesive offense when she was off the floor in 2019-20. Their depth is much-improved, especially scoring terms; nobody outside of her and Chasity Patterson could really create their own bucket last season. Howard is going to be heroic either way, she shouldn’t be as heavily relied on this year.

Barkley: Kentucky needs Howard to play the best she’s ever played because nobody knows when the Cats will boast a team like this one again. She makes other players better. In that sense, she may be able to dial it down when her teammates are hot. I don’t think she’ll average as many points as she did last season due to roster depth, but her fingerprints will be on every game.

*What will Kentucky’s record be? Where do they finish in the SEC?

*At the time this was completed, Kentucky had only 23 of the minimum 25 games scheduled.

Braden: Outside of Depaul, the non-conference slate is not super challenging on paper. The first four SEC games on the other hand (vs. No. 14 Arkansas, at Tennessee, at No. 13 Texas A&M, vs. No. 1 South Carolina) are a gauntlet. There’s also a matchup at No. 6 Mississippi State along with return dates versus the Gamecocks and Lady Vols. Through it all, the Cats will finish 19-4 and finish no worse than third in the conference.

Eric: 18-5. This Kentucky team has a chance to be one of the country’s best. It’s a shame they play in the same division as perennial power South Carolina. Basketball is incredibly volatile, and momentum is key. A couple games slipping through the cracks is inevitable. The Cats claim second in the SEC by virtue of a win in Starkville.

Barkley: 20-3. Akin to the men, I see these Cats defeating everyone they’re supposed to. They’ll lose to South Carolina twice and Mississippi State, putting them third in the conference. They could potentially make it the SEC tournament finals, but the Bulldogs and Gamecocks are just so talented year after year that it’s difficult to put the Cats in the title game.

How far does this team go in March? Are they able to make the Final Four for the first time in the program’s history?

Braden: The saddest thing about Coach Mitchell’s retirement is that this team would have been the best of his tenure and given him his best shot at getting to the season’s final weekend. The lack of parity in the women’s game means it’s easier to avoid early upsets, but extremely difficult to advance past the Sweet Sixteen. That precludes me from definitively saying the Cats appear in the Final Four, but they have a fantastic opportunity to do so.

Eric: It all depends on who they’re matched up against. The talent for a Final Four run is in place; there are just some terrifying matchups in the women’s game today. All it takes is one bad shooting night and you’re gone sooner than you imagined.

Barkley: This team has everything needed to make a Final Four run. The Cats have a fantastic backcourt and depth throughout the roster. More importantly, they have the ability to score out of the post, which they lacked in 2019. If Coach Elzy can rally the Cats on the defensive end like she plans, they’ll be hard to beat.