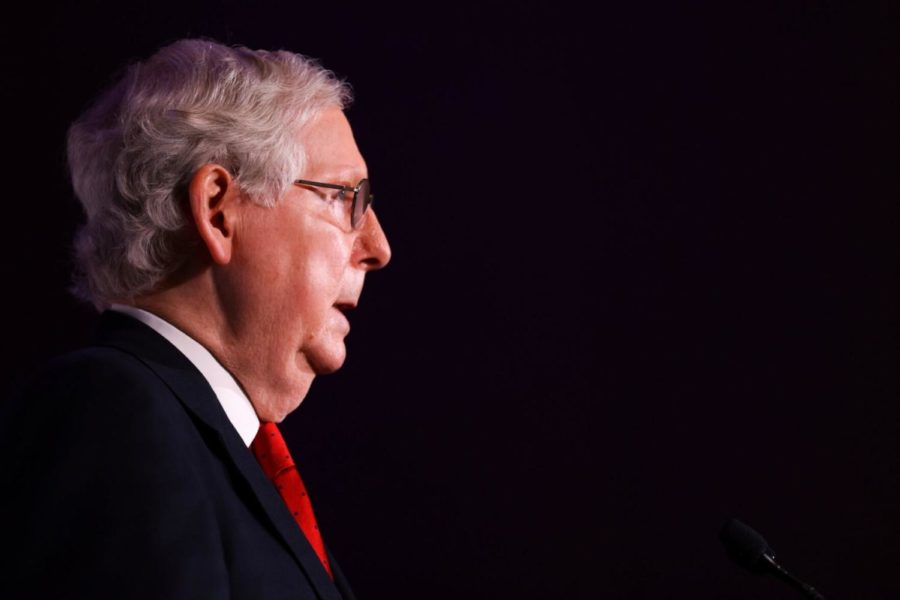 After months of attack ads, fundraising and campaigning, Mitch McConnell solidly retained his Senate seat Election night against Democratic candidate Amy McGrath. It came as little surprise to Kentuckians, many of whom can’t remember a time when McConnell wasn’t one of the state’s senators.

In his 36th year as a Kentucky senator, and sixth year as Senate Majority Leader, McConnell has focused on furthering the Republican Party’s legislative agenda. He led the push to confirm Justice Amy Coney Barrett, successfully swearing in his third Trump Supreme Court appointee.

According to his campaign website, McConnell also guided the confirmation of 53 circuit court and 162 district court judges by the Senate in the first half of Trump’s first term. The conservatism of the nation’s highest court, as well as many lower federal courts, will be one of McConnell’s strongest legacies.

“We’ve made historic progress in rebuilding a federal judiciary that respects separation of powers,” he said. “We’ve confirmed brave and qualified men and women to defend our Constitution.”

McConnell’s watch party wasn’t much of a party at all. With only media members permitted to attend due to COVID, the ballroom of the Louisville Omni Hotel was quiet and half-empty.

Shortly before 8 p.m., one of McConnell’s campaign spokespeople told press that Fox News had called the race for the incumbent senator and that he was on his way to deliver a victory speech. The AP and other news outlets called the race a little later.

McConnell will serve his seventh term from 2020 to 2026, extending his record as the longest-serving Kentucky senator. In his speech, he said some of his main priorities include protecting the unborn, defending America against China, continuing to build a strong nation defense, and effectively fighting COVID.

In his remarks, McConnell denounced socialism, among other ideas the GOP often considers  “liberal.”

While opponent Amy McGrath fell far behind in the polls, she raced past McConnell in fundraising, collecting $88.1 million compared to his $55.5 million, according to Vote Smart’s latest records. Most of the funds for both candidates were raised from outside Kentucky and were spent on dozens of advertisements that saturated the commonwealth’s air waves the past several months.

McGrath campaigned on promises including promoting affordable healthcare, cleaning the corruption of the “Washington swamp” and rebuilding Kentucky’s economy post-pandemic.

However, she received criticism after defeating Charles Booker in the Democratic primary, partially thanks to the DNC’s financial and political support. Booker’s campaign picked up late steam, but strong endorsements and increased enthusiasm weren’t enough to outrun McGrath’s donors and advertising. Some Kentucky Democrats said that the Democratic Party’s McGrath endorsement showed that Washington was out of touch with the state.

“I feel like growing up in Kentucky, I’m so used to [McConnell] winning,” she said. “It’s very sad, because I feel like McGrath is not the candidate to beat McConnell.”

Most UK students were confident that McConnell would keep his seat, whether or not they supported him.

“It’s a pretty heavily Republican state, so it’s just natural that the person who leans a a little bit more far right is going to be the one who comes out on top,” said Braden Burgess, UK junior. “Plus it’s going to be a little harder for a woman I think to win in Kentucky to be honest—a little more than somewhere else.”

Junior Trevor Andus shared low expectations for the McGrath campaign. While he said McConnell has been in office for too long, he didn’t think that this was the year or competitor to unseat him.

“Even with all the commercials and stuff that Amy’s been running, I don’t think she has a very good chance,” Andus said.

McGrath spent Election Day on a last-minute campaign trail in Owensboro, Lexington, and Louisville, according to her social media feeds. McConnell, however, was absent on social media and the campaign trail, which spoke to his confidence in his victory.

Unfortunately for the McGrath campaign, none of this was enough to flip the red state to the Democrat’s side. On Election Day, well-known political forecasting site FiveThirtyEight gave the former Marine pilot a measly 4% chance of victory.

In his victory remarks, McConnell applauded McGrath for running a “spirited race,” stating that the competition of ideas is crucial to a free society.

Kentuckians made a “clear choice” by picking the candidate with “proven leadership,” McConnell said. He explained that he is the sole Congressional leader not from New York or California, and as such represent’s “middle America’s” interests.

One example of this is the Hemp Farming Act, a bill McConnell sponsored and introduced in 2018. After incorporation into the Agriculture Improvement Act of 2018, it was enacted into law,  legalizing hemp and eliminating several regulations surrounding the budding industry. While McConnell is not in favor of legalizing marijuana, he sponsored this bill due to potential economic benefits for farmers.

In addition to this bill, McConnell has sponsored 24 other enacted bills during his tenure, mostly focused on agriculture, national defense, the opioid epidemic, family values and the economy.

While McConnell has won his seat, the Senate’s fate is still uncertain. If the Democrats win a majority of seats, then McConnell will lose his majority leader position, and with it, some of his power. Despite this possibility, the senator called for unity, no matter the presidential and Congressional results.

““Our country is going to get back on our feet,” he said. “Our fellow citizens are not our enemies. There’s no challenge that we cannot overcome together.”