Kentucky offense shows sparks in first half versus Alabama 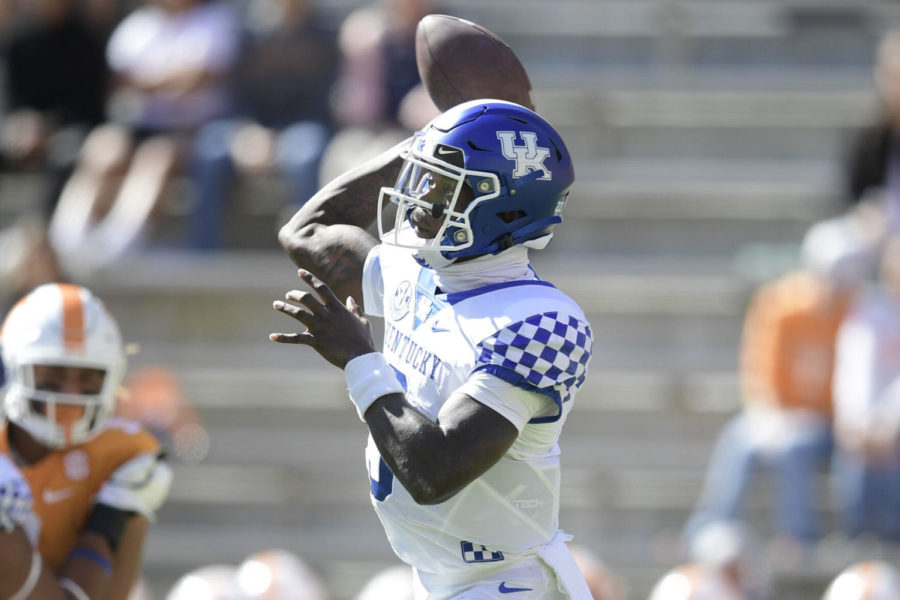 Kentucky quarterback Terry Wilson (3) throws the ball in the first quarter of a game between Tennessee and Kentucky at Neyland Stadium in Knoxville, Tenn. on Saturday, Oct. 17, 2020.

Despite getting blown out by Alabama 63-3, Kentucky’s showing was somehow not complete doom and gloom. The offense, particularly in the opening half, provided a little optimism for the season’s final two weeks.

This came in the glimpses of explosiveness the Cats showed over their first few drives. While the unit totaled only 179 yards, those opening possessions showed a big-play potential we haven’t seen much of this season.

Quarterback Terry Wilson threw for 110 yards against Vanderbilt; this week, he threw for 120 yards in the first half. A 33-yard jet sweep pass to Josh Ali helped Kentucky set up their lone field goal, while 17 and 21-yard connections to Isaiah Epps and tight end Keaton Upshaw contributed to Kentucky’s other two real scoring chances.

These big yardage plays, coming with the usage of pre-snap shifts and motions, allowed the Cats move the ball and put themselves inside the Alabama 25-yard line on each of its first three drives.

“Early in the game I thought our guys were playing extremely hard, extremely physical,” head coach Mark Stoops said postgame. “We did do some good things early.”

The hopeful start quickly turned into a nightmare, as an errant snap on one field goal attempt and a missed kick on the next seemingly sapped the team of its will to play, turning the tide in Alabama’s favor. An inability to make stops defensively and a then-stalled offensive attack contributed to the 28-3 halftime deficit, and neither improved after intermission.

“You know you’re going to be in a tough environment from the start,” Stoops said, “But then the mistakes – you can’t do that against a team like this… it hurts you mentally. It deflates you as a team.”

After Wilson threw a pick-six on his second third quarter drive, Kentucky’s main contenders for next year’s starting position saw action. Neither really impressed in their opportunity.

Joey Gatewood entered first. He worked two possessions, but was unable to complete any of his four passing attempts. The Cats picked up three total yards – eight rushing, five lost due to a delay of game – before he ceded the field to Beau Allen.

Unlike last week, Allen wouldn’t do much in his appearance. Like Gatewood, he dropped back four times. But he only threw a pair of passes, both of which were incomplete. He was sacked on the other two passing plays. The Cats didn’t record a single yard over the two drives he was tasked with.

In other words, the second half was complete Crimson Tide domination.

“We want to be at our best, play at our best when we’re playing a team like this, and we didn’t do that,” Stoops said. “We have to watch a lot of this film and learn from it.”

While Kentucky’s offense only showed these sparks early on, they’re definitely a positive takeaway from a game that otherwise didn’t offer one. Heading into a matchup with top-ten Florida, it’s something to build upon.