Louisville voters on the how and why of their voting method 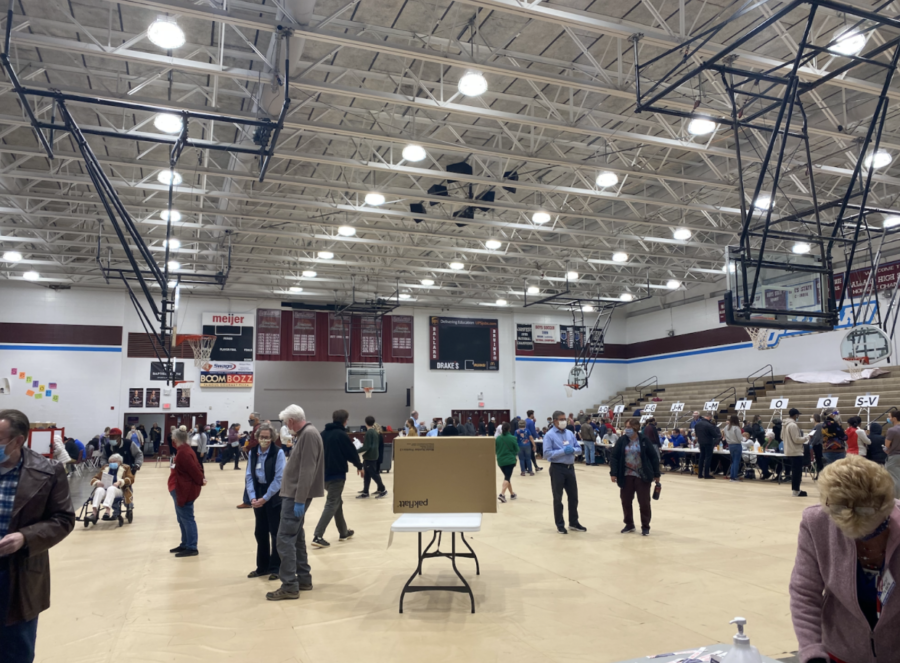 Voters spread out in the gym of Ballard High School, a voting location in Louisville, Kentucky, as they cast their votes on Election Day, Nov. 3., 2020. Photo by Clare Egan.

The ballots kept coming in Louisville. Kentuckians sent in absentee ballots, voted early in-person or cast their ballot in-person on Election Day. Not only did voters have a variety of voting methods to choose from, they also had a multitude of reasons for why they voted the way they did.

Joe Johnson has worked in Louisville polling locations since the 2000 Presidential election. This year, he worked at the Louisville Marriott East early-voting location.

“The turn out was very large. Over 81,000 votes overall. Today it’s been unusually light at this location, we’ll probably end up with less than 3,000. We’ve been averaging around 5,000,” Johnson said.

“Yesterday at the Marriott we had 6,900 voters, which was our second highest day,” poll worker Cheryl Fekete said.

Ingra Farris, a first-time poll worker, said the turnout has been unbelievable.

“I did not expect this at all. The experience has been fun really, since I like meeting new people I love first time voters and we always recognize them by clapping and cheering them on,” Farris said. She was shocked at how many adults had never voted before, particularly elderly new voters who were confused by the process.

“This clearly needs to be taught in school, so students can learn how to vote and when to vote,” Farris said, a sentiment shared by voters.

Bernadette Sadlo voted via absentee ballot in the 2020 primary and said that despite having a graduate degree, she still found the process confusing.

“I found early in-person voting to be easy, efficient and better than mail-in voting,” she said.

Abbe George, who voted via absentee ballot, chose to vote by mail because it gave her more flexibility. She said that while the voting process was easy, she felt parts of the ballot – those regarding amendments to the Kentucky Constitution and tax changes – were incredibly convoluted, especially for the average reader.

“I felt like I needed to consult friends in the field of law to better understand the two amendment questions, which seems to me like a barrier for educated voting,” George said. Still, she thought the voting process itself was good.

“I do feel like my vote is safe and protected. I was notified once my ballot was received which affirms my confidence in the mail-in voting system,” she said.

Despite the tension surrounding the election and the ever present threat of COVID-19, Louisville voters have vocalized how simple it was to vote this year.

“Election officials have done an excellent job given the circumstances,” Amber Burke, a Louisville resident, said.

Jeff Johnson chose to vote via absentee ballot because it was the easiest option. He requested a ballot on Oct. 15; arrived just four days later and he was emailed confirmation that his ballot had been received.

Johnson and his wife, Lynn, mentioned how much they enjoyed the option to vote by mail. “This is the first year that I have done the absentee balloting and more than likely do it again in the future,” Lynn Johnson said.

“I feel like my vote, specifically doing the absentee ballot, is safe. I know a lot of people who refused to do the absentee ballot because they thought it would be lost in the mail, but I did not have that experience. Kentucky has been great about communicating the status of my ballot, so I felt like it was in good hands,” Mitchell said.

Though voting by mail was easy for Pierce Barner, he is concerned with others who sent in absentee ballots that may not have been properly filled out.

“I worry about those that forgot to sign in both places,” Barner said.

Absentee voting was expanded this year to accommodate concerns over COVID-19, which is what led Terri Stallcup to request an absentee ballot. However, due to complications with her ballot she ultimately had to vote early in-person.

“My ballot seemed to have gotten wet and I didn’t want them to think my ballot had been tampered with so I went to in-person voting” Stallcup said. “Because I had originally requested a mail in ballot, they directed me to a table inside the polling room. They called someone and gave me a new ballot. I went to a station, voting and proceeded to turn it in. The whole process took about 10 minutes, includ[ing] the time getting the new ballot.”

Others who requested absentee ballots decided to guarantee their security by delivering their ballot to a polling location or dropbox.

“I wasn’t sure what the orange buffoon was currently doing with the U.S. mail,” said Jennifer Whitfield.

Hayley Davis did not receive her absentee ballot in time to return it via mail and took it to an in-person dropbox location.

“The in-person drop box was also pretty close to our house and the people working there were really helpful in showing you where to drop your ballot. They even checked to make sure that the outside was signed properly” Davis said. She also mentioned that this election has not felt particularly secure, but feels relieved to have confirmation that her ballot was received.

For Emily Boden, voting in person was a way to manage her election stress.

“I voted early in person because I knew that if I voted by mail I would just have constant anxiety waiting and checking if my ballot had been received,” Boden said. She felt much more confident in the security of her ballot since she personally placed her ballot into the scanner.

“Plus when I put it in, the poll worker had me watch the screen for a second so I could see that it was counted, so that was kinda cool,” Boden said.

For Lauren Brown, the choice to vote early in-person was easy. “There was no reason for me not to, I am not immunocompromised and felt safe doing so in person” she said. Brown added that she took her one- year-old son with her to vote and still was able to vote and be back in her car in 10 minutes.

crows, opting to vote early in-person. She was amazed at the voter turnout.

“ It was like nothing I’ve ever seen before in my voting experience and I’ve voted in every election! I admit, I even teared up a little while standing in line to get my ballot. It made me feel optimistic for the first time in a long time that maybe our country can heal itself. It’s been a pretty tumultuous four years and I was hopeful when I voted that maybe people had felt like ‘enough was enough’,” McArthur said.

Polls opened at 6 a..m in Louisville and poll worker Fekete said there was a steady trickler at her location.

At the Ballard location, poll workers said the wait time was around 10 minutes all day.

Madeline Reed chose to vote in-person at Waggener Highschool, arriving promptly at 6 a.m. when the polls opened. Her only complaint about her Election Day voting experience was the limited polling locations.

“From what I saw, it looked like there were lots of locations in the East End, but less in the West End,” Reed said.

Erin Hogan intentionally scheduled time to be able to vote in-person today at the Yum! Center polling location, where she experienced no wait time at all.

“I’m glad that they provided free parking, I think that having to pay to park your car in order to go vote is a deterrent for some. It even could be a form of disenfranchisement,” Reed added.

For some voters, the chance to vote in-person on Election Day was more symbolic than practical.

“I wanted to vote on election day because this was my first presidential election and also the 100th anniversary of the 19th Amendment, it just seemed right,” Sylvia Kirkwood, Louisville voter, said.

Whatever the method for voting, the total number of ballots cast in Kentucky has exceeded past elections, Secretary of State Michael Adams said on a talk show on Tuesday night.

Toni Renfro, who enthusiastically praised her early in-person voting experience, said the process was efficient and she still felt safe.

“I hope this process is instituted in all elections going forward so as many people as possible have the opportunity to vote and to participate in our democracy. I am encouraged by how many people in our Commonwealth and throughout the country who have taken advantage of early in-person and absentee ballot voting,” Renfro said.

2020 is the first election in Kentucky that offered early in-person voting, a result of the COVID-19 pandemic. NBC reported that nearly 900,000 Kentucky voters took advantage of the option to vote early, while over 500,000 voters chose to vote via mail-in absentee ballot. Nearly 1.5 million early votes have been counted, only 400,000 less than the total amount of 2016 voters.

“I told my family about the entire process and we all wondered why early voting wasn’t always the norm for every election,” McArthur. Why did it take a pandemic to make this process, which is so vital to our democracy, easier for so many Americans?”