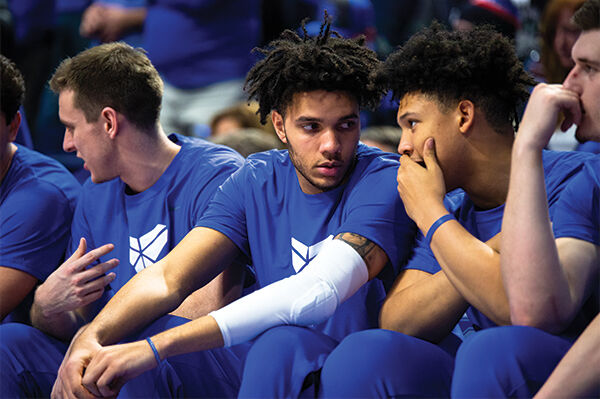 If there is any group of fans used to learning an abundance of new names every basketball season, it’s Big Blue Nation.

This year is no different, as 12 players will dawn Kentucky blue on the hardwood for the first time in 2020.

About: Brother of the NCAA 2020 National Player of the Year Obi Toppin, Jacob joined UK after spending his freshman season at Rhode Island. Jacob appeared in all 30 games for the Rams last season.

About: Considered one of the top point guards in his class, Devin Askew led Mater Dei High School to the CIF Open Division Southern California Regional championship as a sophomore and his Nike Elite Youth Basketball League to the 2019 Peach Jam finals. Askew was named California Interscholastic Federation First Team and Trinity League Player of the Year as a senior.

Fun Fact: Devin plays with a $5 bill in his left sock.

About: Kentucky’s top-ranked player in the class of 2020, Boston has already acquired many accolades. He led his high school Sierra Canyon to a No. 2 national ranking as a senior, was named a First-Team Naismith All-American, SLAM Magazine All-American, Mr. Basketball in California and was selected to the McDonald’s All-American game, among other notable achieve-ments.

Fun Fact: Boston’s favorite movie is He Got Game.

Fun Fact: Terrence chose No. 5 because he once forgot his No. 6 jersey before a game and had to wear No. 5; after playing well in No. 5, he’s stuck with the number ever since.

About: After battling injury for the 2019-20 season, Davion Mintz redshirted his final season as a Bluejay before transferring to UK. He started in 89 games over his three years in that program, im-proving his field goal percentage each season.

About: After suffering a knee injury his senior year of high school and dealing with injuries from a car crash, Allen redshirted his first season with UK. He was named Kentucky’s Mr. Basketball as a senior, and scored 3,255 points in his high school career, which ranks 11th all-time in state history. His 1,228 rebounds are good for 22nd all-time.

About: Brooks is the lone returning Wildcat who saw minutes in the 2019-2020 season. While his box score numbers are modest, he made valuable contributions on both ends of the floor that aren’t reflected in his raw stats.

Fun Fact: Brooks wears No. 12 because it is the number his father wore in high school.

Fun Fact: Fletcher dunked for the first time when he was just 13.

About: Jackson was a three-time All-State selection and four-time defensive player of the year in his conference in Michigan. He led his high school, Waterford Mott, to two district and two league championships. He was also a finalist for the Mr. Michigan Basketball award.

Fun Fact: Isaiah’s nickname is Zeek, and he is one of five children.

About: Rated as the number one transfer in college basketball for this upcoming season, Sarr joins Kentucky after spending three years in the ACC with the Demon Deacons. Sarr was named Third-Team All-ACC and was runner-up for ACC Most Improved Player last year, recording 11 double-doubles along the way.

Fun Fact: Fishing is one of Sarr’s hobbies away from basketball. He considers his fishing rod to be his most prized possession.

About: Lance Ware knows how to win; his high school team lost only one game his senior sea-son. That team finished No. 1 in the final NJ.com Top 50 rankings. Ware anchored the team, being named NJ.com Player of the Year and selected to First Team All-State for his efforts.