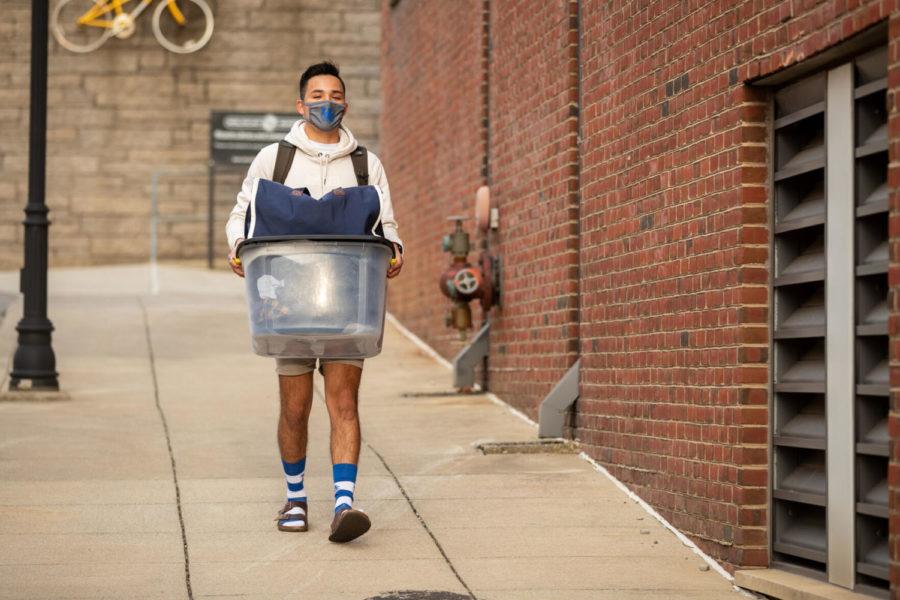 UK junior computer engineer major Tony Ramirez moves out of his dorm on Tuesday, Nov. 24, 2020, at the University of Kentucky in Lexington, Kentucky. Photo by Michael Clubb | Staff.

A semester that began as an experiment has nearly come to an end, with UK students departing campus prior to the holidays. The final day of classes was Tuesday, Nov. 24, though finals will be held online the following week of Dec. 1 – 4.

As students return home to their families and friends, some have taken precautions to protect their families. UK urged all students to get a COVID-19 test before leaving campus, as many epidemiologists included Dr. Anthony Fauci predicted that college students returning home could add to an already-surging third wave

Students moved out of their dorms in stages as Thanksgiving crept closer; some waiting until classes finished, while others went home the week prior. Move-out was different  than the mass evacuation of spring semester, but still left students reflective on an unusual semester.

Freshman Joseph Archambeau, studying pre-med, said his semester didn’t line up with his hopes coming in.

“I personally only had one hybrid course this semester, meaning I only went to my in-person class for an hour and fifteen minutes on Mondays. I had expectations for my first semester of college and now that it is over, it wasn’t at all what I expected,” Archambeau said. He moved out of his room the Monday before Thanksgiving.

For first year students like Archambeau, the timeline to experience a “normal” college semester is still unclear. But returning students are also adapting to the changes of this historic fall semester.

Nicole Martin, a sophomore nursing major, was on campus finishing assignments before departing for her home in Michigan. Martin said she was struggling to adapt to the online finals week, which has students going home for good before taking their final exams.

“I’m used to having dead week as a time to prepare for my exams with nothing else going on to distract me, but this year I have to use my time at home during the holidays to study,” Martin said.

Martin, like many other students, have expressed the negativity of having dead week during the holidays. Calendar adjustments are one of many initiatives UK took to limit the spread of COVID-19 on campus, some of which took more adapting to than others.

“Wearing a mask every time I left my room was something I always had to be mindful of. It was kind of annoying feeling I had to be so careful in my own home technically. I think the biggest change for me to get used to was having to get every meal from the dining hall to-go. I wasn’t expecting that to affect me as much as it did,” said Bridget Edwards, a freshman on the marketing track. She moved out of Jewell Hall for the break with the help of her older brother.

Kate Anderson, a freshman and special education major, moved out of her dorm with her father’s help before heading home to Indiana. She said she took precautions to go home safely.

“Freshmen in the dorms are required to get a COVID-19 test before heading home unless you’ve already moved out or have been positive in the past. So I got mine last week and luckily I’m negative, because I didn’t want to go home and put my family in danger,” Anderson said.

Residents of University Flats were also required to get a COVID-19 test, though for other students it was a recommendation. Students will face mandatory testing upon their return to campus in January – but first, they will have to tackle finals week and a holiday season amidst a surging COVID-19 pandemic.