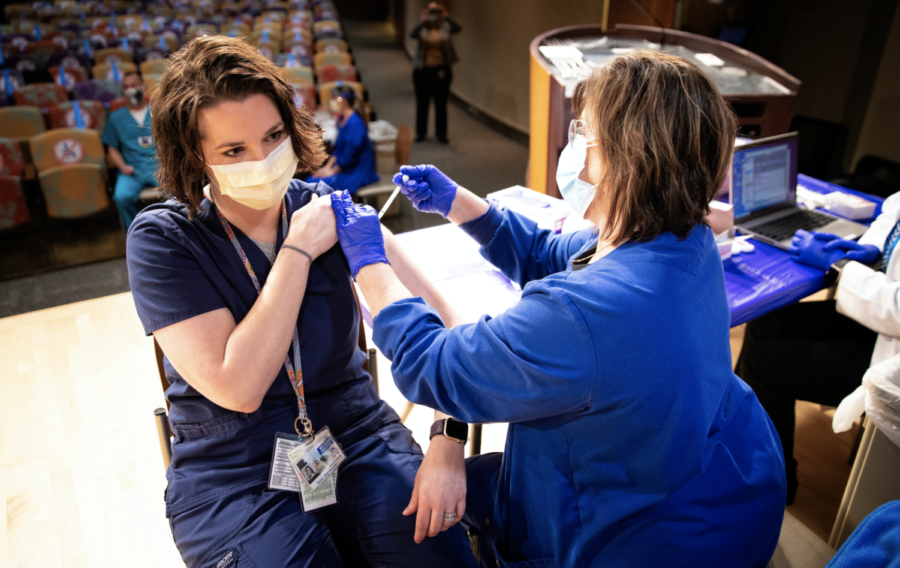 Just over nine months after the COVID-19 pandemic hit the Commonwealth, the first vaccinations against coronavirus are being distributed in Kentucky hospitals this week – including at the University of Kentucky.

UK Chandler Hospital was one of 11 Kentucky hospitals selected for the first shipment of COVID-19 vaccines. Three locations received their first doses on Monday, Dec. 14. University of Louisville Health employees were the first Kentuckians to receive non-trial vaccinations against COVID-19 during a special livestream with Gov. Andy Beshear.

“Didn’t even feel it,” said Dr. Jason Smith, chief medical officer for UofL Health and the doctor who got the first vaccination in Kentucky.

According to WLWT, the 11 hospitals were chosen because they have the size and temperature storage for the pallet requirements. Location, population and COVID incidence rates were also factored into the decision.

UK received its shipment the morning of Dec. 15 and began vaccinating healthcare employees later in the afternoon.

Chief pharmacist Philip Almeter said there was a lot of excitement in the room when the first vaccinations were administered.

“This isn’t the end, but it’s the start to the end and it’s nice to know that our effort is contributing to the end,” Almeter said.

A CDC representative was present for the unboxing. UK also participated in a trial run last week, which Almeter said helped the hospital know what to expect from the different entities involved – the CDC, UPS and the state government.

UK plans to do 88 vaccinations on Tuesday and gradually scale up, with 258 expected on Wednesday and Thursday, respectively.

Mark Newman, executive vice president of health affairs for UK, said he expects it will take a week to administer all 1,950 doses, which Almeter said is on par with UKHC’s record for flu shots in a week.

“Rolling this out takes a considerable team effort,” Almeter said, adding that nurses, doctors and pharmacists will all help deliver the vaccines. UK officially began administering doses at 2:30 p.m. on Tuesday, following a 10:30 a.m. delivery and time for the vaccine to thaw.

UKHC and the other 10 hospitals are receiving the Pfizer/BioNTech vaccine, which requires two doses and must be kept at negative 70 degrees. The Pfizer vaccine and others still awaiting approval are products of Operation Warp Speed, a government-funded initiative to produce a COVID-19 vaccine.

Less than a year from conception to distribution is a record for vaccine making, which Beshear called a “modern medical miracle.” Still, the speed has some Americans concerned about safety.

“I think you’re finding that the healthcare workers that are signing up to receive it are showing that they believe it’s safe and effective,” Almeter said.

Pfizer’s vaccine was approved for emergency use authorization by the FDA on Friday, Dec. 11. By Sunday, the first shipments were distributed across the United States. The UPS Worldport facility in Louisville – the center of the company’s package sorting network – was a key player in nationwide distribution.

“When the full history of this pandemic is told, Team Kentucky will have played a major role,” Beshear said.

Kentucky was allocated 38,025 doses of the Pfizer vaccine in the first round. Just under 13,000 will go to hospitals, and the remaining 25,000 will go to residents of long-term care facilities.

Walgreens and CVS have been contracted to handle those vaccinations. Beshear said the goal is to have all nursing home residents vaccinated within the next two months.

According to Beshear, 66 percent of Kentucky’s coronavirus deaths have been related to long-term care facilities, resulting in over 1,000 deaths.

“Those here in the hospitals can tell you when our long-term care residents are hospitalized the amount of resources that they take up prevent these healthcare heroes from seeing more patients,” Beshear said.

“I was very fortunate to get it so quickly, I have a lot of exposure in the emergency department. I think it’s kind of a big deal after the year that this country has been through,” said Dr. Eckerline in a video tweeted by UK.

UK Healthcare was allotted 1,950 doses of the Pfizer vaccine; hospital officials expect a second shipment within the next 21 days to fulfill the two-dose recommendation. According to Newman, the Pfizer vaccine can be 90 percent effective seven days after the second dose.

He said the hospital has a committee including pharmacists and ethicists to determine who will get the vaccine first. Most of the individuals in the first round are caregivers in the emergency room and COVID-19 intensive care units.

Newman shared the categories used by the CDC for determining vaccine prioritization. Phase 1a should be high-risk healthcare workers and Phase 1b includes people with significant high risk and older adults in congregate settings.

“This is not just people showing up, this is us identifying high-risk individuals,” said Newman in a Tuesday press briefing. Newman estimated that about 2,500 healthcare workers are caring for COVID patients, so the first round will not get all of them.

According to chief pharmacist Philip Almeter, UKHC employees are invited to receive their vaccine through the same platform that is used for daily screening questions.

Developed by the IT department, the platform sends chosen workers the choice to accept or decline the vaccine; the worker will be prompted to sign a consent form if they accept, and then sign up for an appointment time.

That method allows them to avoid overcrowding. Almeter said that of the workers offered the first round of the vaccine, it’s “overwhelmingly positive that they want the vaccine.”

Newman said he believes UKHC workers are excited for the vaccine because they are seeing the results of not having one and the sickness that results.

“They see and live that everyday, so I think you’re going to see they’re really excited to be able to have the vaccine to be able to protect them and their families and their patients,” Newman said.

UKHC conducted a survey last week to gauge employee interest in the vaccine.

“Half of respondents said yes, right away I want it. Another third said I do want it I want to understand more information on the side effects but I do want the vaccine,” Almeter said.

That confidence in the vaccine played out Monday afternoon, when the first invitations were sent out and vaccine appointments for the first two days were quickly claimed.

According to Almeter, the COVID-19 vaccine take longer to administer because of the process.

“It’s not as simple as a flu vaccine,” Almeter said. Unlike flu shots, the Pfizer vaccine is not a pre-filled syringe.

The vaccine is refrigerated at negative 70 degrees, so first it must be thawed to around 2 – 5 degrees Celsius, which takes three hours. A diluent, which is kept at room temperature, is added as well, and there are steps for rotating and drawing each dose out of the vial.

“It takes a considerable amount of manipulation after it thaws,” Almeter said.

Each dose is .3 mL and there are five a vial. Almeter said he does not expect an easier dosage system soon because Pfizer would have to change the formulation.

“[It] will not change unless Pfizer comes up with new application that the FDA would have to approve,” Almeter said. He expects those giving the shots to get more familiar with the process over time.

The Pfizer vaccine requires a follow-up shot; UKHC expects a shipment to arrive within 21 days.

UKHC will use the same IT platform to send email reminders to vaccinated employees to remind them to get their booster shot.

Newman said they plan to send reminders to employees, which is “why it’s so important in the first phase to get information and keep records.”

Pfizer also included a card for those vaccinated with a reminder to get the booster. Almeter said those vaccinated can use the information on the cards to register with V-Safe, a CDC-provided service where users can report any COVID symptoms and get reminders for booster shots.

Almeter and Newman both emphasized that the vaccine distribution was a team effort and had a lot of moving parts and considerations.

“We want to be careful, because we know this vaccine is precious,” Almeter said.

Getting students back in schools was one of the priorities mentioned by Beshear in his vaccine briefing on Dec. 14.

“This is a historic achievement that promises to save lives, end this fight, restore our economy, get out kids back to school and let our kids hug their grandparents once again,” Beshear said.

Health department officials in Lexington and nationwide have urged the public to remember that the vaccine is not a cure and that the pandemic is not over yet. Public health measures like mask mandates, social distancing and contact tracing are still necessary and will continue to be so for the foreseeable future.

“We see victory,” Beshear said. “We must protect our people until we get there.”

Although many are calling the vaccine “the beginning of the end” of the pandemic, doses will not be available for the general public until late spring, some medical professionals predict.

Vaccine rollout is limited to how quickly doses can be produced and shipped. Public skepticism will also shape how quickly Americans are vaccinated, and is complicated by reports of allergic reactions to the Pfizer vaccine. In the United Kingdom, which began vaccinations last week, health officials warned those with a history of severe allergic reactions to steer clear of the vaccine. Additionally, the vaccines have not been tested for pregnant people and children.

But hope is on the horizon. Two more vaccines may be added to the nation’s repertoire within the next month.

The Moderna vaccine is expected to be authorized within the week. This vaccine differs from Pfizer’s in two significant ways: it may be up to 5 percent more effective and doesn’t require as cold storage, which means it’s more accessible for smaller hospitals and rural areas that cannot afford super freezers.

Newman said he expects that the first shipments of the Moderna vaccine in Kentucky will go to hospitals that did not receive Pfizer vaccines, so that the state can diversify its coverage.

As explained by UK’S head pharmacist Philip Almeter, vaccine allocations and orders are determined by the state government. Beshear said Kentucky could get up to 150,000 doses of the Moderna vaccine.

A third vaccine may be coming online in the next couple of weeks. The ENSEMBLE trial for Janssen pharmaceuticals is in Phase 3. UK HealthCare is one of the test sites for this clinical trial, which according to Newman has been decreased from 60,000 participants to 40,000.

President-elect Joe Biden announced a goal of 100 million COVID-19 vaccinations within his first 100 days in office. That goal is still a long ways away, but it got underway at UK today, one shot and one person at a time.