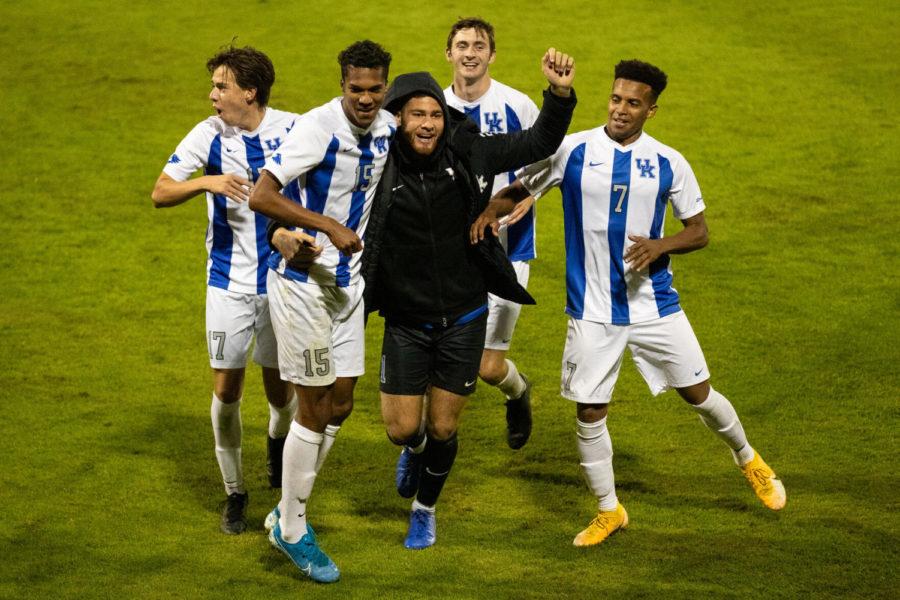 UK junior forward Brock Lindow celebrates with his teammates after scoring a goal during the University of Kentucky vs. University of Alabama at Birmingham men's soccer game on Saturday, Oct. 17, 2020, at the Wendell and Vickie Bell Soccer Complex in Lexington, Kentucky. UK won 2-0. Photo by Michael Clubb | Staff.

Like volleyball, the NCAA soccer late was split into an atypical autumn and spring session due to the COVID-19 pandemic. While Kentucky’s men’s team didn’t go undefeated in the first portion of its schedule, it came darn close to doing so, and looks to get back to form this afternoon against Xavier.

The Wildcats began the fall with its toughest matchup of the year, tasked with taking on Notre Dame in South Bend. It was a well-fought battle, but the Fighting Irish pulled out a 1-0 victory on the back of Daniel Russo’s goal – off an Aiden McFadden corner kick – in the 62nd minute of the match. Notre Dame moved into the fifth spot of the United Soccer Coaches (USC) Top 25 because of the win.

The loss – Kentucky’s first in its opening match since 2014 – proved to be only a bump in the road though, as the Cats got back on the winning path in their 2020 home debut just four days later. Four different players – Aimé Mabika, Kalil ElMedkhar, Bailey Rouse and Daniel Evans, in that order – found the back of the net for the Cats, pushing them over the Duke Blue Devils 4-2.

Kentucky followed the victory with another a week after, defeating Louisville 3-1 in their second match at The Bell. Two proved to be the magic number for the Cats, as sophomore Eythor Bjorgolfsson’s two goals powered them past their rival. Mabika added his second goal of the year via penalty kick in the 83rd minute to cap the night’s scoring.

Now slotted at No. 4 in the USC Top 25 rankings, Kentucky faced Sun Belt adversary Central Arkansas looking to move to 3-1. The Bears took the lead just about seven minutes in, and held it for nearly an hour’s worth of game time before the Cats could even the score. Mason Visconti, a 2019 Clemson transfer, knotted things at one apiece in the 74th minute off assists from ElMedkhar and Leon Jones.

On a corner kick, the Toronto native boomed the ball on a line, one that wrapped around into the goal’s upper right quadrant and clinched UK’s third win in as many tries. It was Lindow’s third career game-winning goal.

The Cats wrapped up their fall contests two-score victories over both Mercer (3-1) and UAB (2-0). ElMedkhar recorded his second and third scores of the year, putting him at the top of Kentucky’s fall point list (8).

Now, after being off the pitch since Oct. 17, the 5-1 Cats return to action against the Musketeers. While still one of the nation’s best teams, their attempt to build off the strong start to the campaign – which saw them get as high as No. 3 in the country will be absent a couple of notable names.

ElMedkhar and Mabika, two of the squad’s top leaders, moved onto the bigger and greener pastures of Major League Soccer during the winter offseason. ElMedkhar had his homegrown rights traded from the Philadelphia Union to FC Dallas, who he then signed a two-year deal with, while Mabika – the reigning Conference USA Player of the Year – was drafted 26th overall in the league’s SuperDraft by Inter Miami CF.

Today’s spring kickoff match with Xavier is set for 1:00 p.m. E.T. It is being broadcast on ESPN Plus.