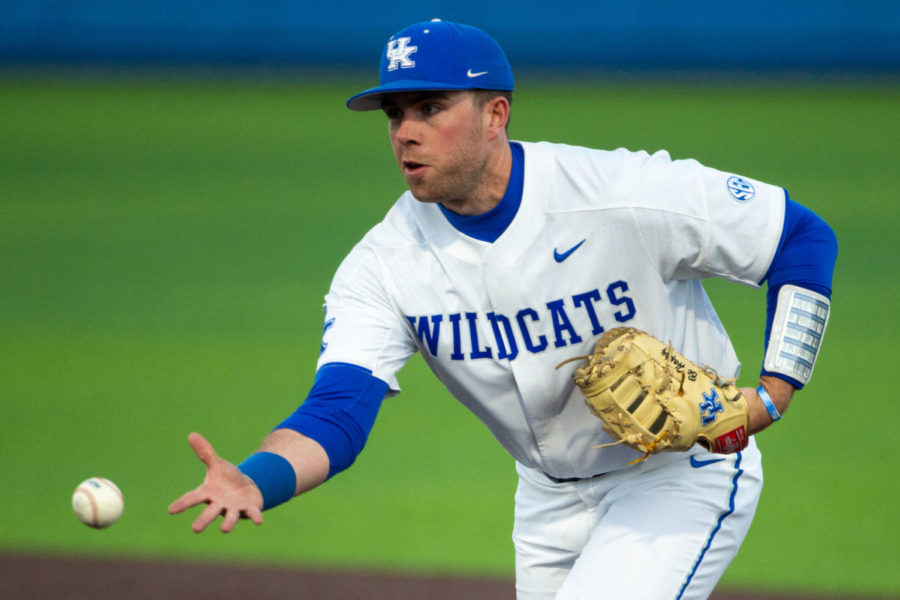 Kentucky senior T.J. Collett tosses the ball to a teammate during the game against Norfolk State University on Saturday, March 7, 2020, at Kentucky Proud Park in Lexington, Kentucky. Kentucky won 11-1. Photo by | Staff

Just under a year ago, Nick Mingione and his team were preparing to head off to Nashville to kick off conference play against the reigning national champions. But a now-familiar story played out: COVID-19 shut down the season, and those games were never played.

Now, Mingione and his veteran-laden squad enter the 2021 season confident they can build off last season and be serious competitors in a loaded SEC.

“This team is high trust, low maintenance,” Mingione said. “They’re unbelievable from the standpoint of they do everything that they’re asked. They are totally committed to the task at hand.”

Because the NCAA granted all athletes an extra year of eligibility, Kentucky was able to return seniors at key positions while underclassmen are able to play with slightly less pressure to accommodate the strength of the schedule. Some of the more highly touted players on this team have still yet to see SEC level com-petition, including maybe their best overall player.

“We’re led by John Rhodes,” Mingione said during a media day. “He was the co-freshman national player of the year, he was an All-American last year, he’s an All-American in every poll you see here. This guy is the package.”

Rhodes is now MLB draft eligible after the event was moved to July. Coming off one of the most prolific freshman campaigns in Kentucky history, where he batted .426 and led the SEC in doubles during the limited season, Rhodes seems to be focused on the potential that the team has for this season.

Joining Rhodes in draft buzz is utility man Austin Schultz,who had a break-out sophomore season. After only hitting two home runs in 44 games as a freshman, the Nebraska native compiled a .754 slugging percentage while belting 5 home runs in only 16 games in 2020.

Schultz’s position, much like Rhodes, is not yet solidified as Kentucky has competition for multiple positions.

T.J. Collett returns to Lexington as a grad student still looking to provide veteran leadership. Voted as a first-team preseason all-SEC by the coaches prior to this season, Collett looks to continue on his pace from last year when he went for five home runs in 17 games.

Zeke Lewi should start the season alongside Collett. Lewis batted .378 and posted a perfect fielding percentage at second base. However, Mingione said players like Reuben Church have been impressive during fall and winter sessions.

At middle infield, Mingione hinted the role is Ryan Ritter’s to lose. Ritter, who Mingione has been gushing about all offseason, was one of the highest ranked JUCO transfers last season after he posted a .905 OPS in his one season at Division III John A. Logan.

“This guy can really defend at shortstop.” Mingione said. “He’s as talented, if not the most talented, defensive shortstop I coached and I don’t say that lightly.”

Mingione also made it seem like Chase Estep had a pretty good hold at the third base position after a promising freshman campaign. At catcher, there seems to be real competition between Coltyn Kessler and newcomer Alonzo Rubalcaba.

“This guy can really, really receive,” Mingione said of Rubalcaba. “Those two guys have helped solidify us better defensively.”

Outfield may be nearly identical to last year’s line-up – Jaren Shelby is back again at center, and Rhodes and Schultz may make sense at the corners for Mingione. Cam Hill, who Mingione said “has really stood out” in training, would be the fourth outfielder, returning from a fractured wrist after only seven games last season.

Coach Mingione also expects changes in the pitcher game. The only guaranteed returner looks to be Mason Hazelwood, who went for a 1.64 ERA and a .91 WHIP while leading the team in strikeouts. After moving completely into the rotation last season to mixed results, Jimmy Ramsey, who saw mixed results after fulling joining last season’s rotation, is moving back into the pen to provide experience in tough situations.

Ramsey pitched a decent ERA last season but struggled with his walk rate, something that he likens to trying to be too perfect while being on the mound. Dillon Marsh is out of the line-up due to an oblique injury, Mingione said.

There’s still room for someone to leap into the starting spot, which newcomer Ryan Hagenow seems to have control of. The highest ranked freshman in Kentucky’s 2020 class and a top-10 recruit nationally, the 6-5 Hagenow has the talent to make an immediate impact.

“Ryan is a straight A-student, he is an unbelievable teammate and he’s super talented… Opening weekend he will not be in the rotation, but you can just see that guy coming,” Mingione said.

Kentucky starts off with a weekend series Feb. 19 – 21 in Chapel Hill as they go to take on North Carolina before heading home to Kentucky Proud Park for 18 straight games.