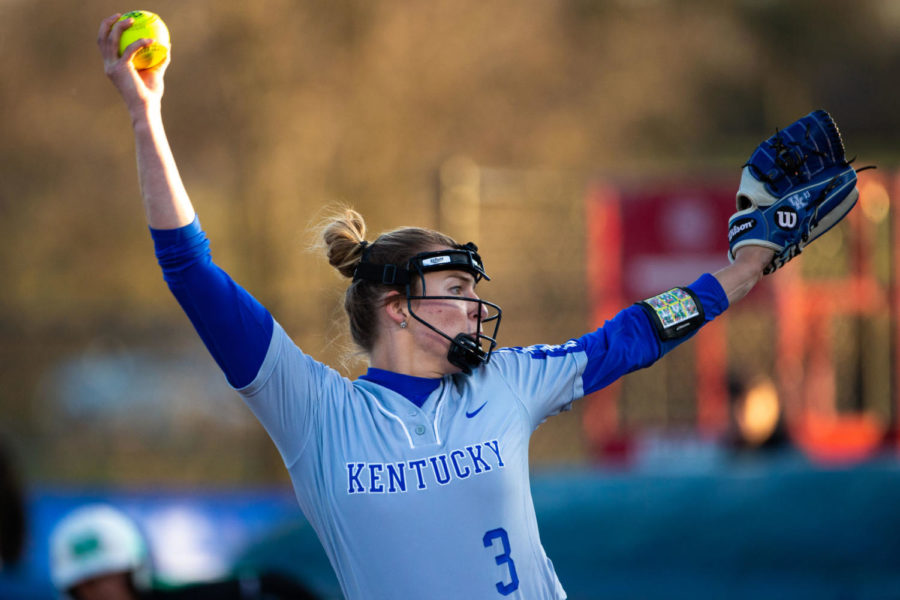 Kentucky softball has been sidelined for nearly a year and is now ready (and eager) to take the SEC by storm this season.

Rachel Lawson, in her 14th season as Kentucky’s head coach, is looking forward to the upcoming season after the extended break caused by the pandemic.

“It’s been a long 11 months for spring sports and the softball team,” Lawson said during media day on Tuesday. “Really excited to get out there Friday and play someone other than ourselves.”

Kentucky kicked off their season Feb. 12 and 13 in a three game series at Samford University.

The Wildcats swept Samford in Friday’s games, 4-0 and 15-3, as freshman Erin Coffel scored three runs and Autumn Humes pitched a shutout in the opener.

Due to early season tournaments, however, the Wildcats won’t play a home game until March

Last season was ended prematurely due to the pandemic. In their final game, then-freshman Miranda Stoddard hit a walk-off, three-run home run to give Kentucky the 16-15 victory.

Kentucky finished last season with a 20-4 overall record and ranked no. 13 by USATODAY. Many other teams did not have the luxury of ending the season on a win like that.

While the cut-off season was bittersweet, Lawson said she has redirected her attention to this year.

“I spend all of my time, energy and focus on this current team and I want to make sure our seniors go out and have all the moments and the experiences they hoped for,” Lawson said.

Coffel, a freshman infielder, was a two-time Indiana Gatorade Player of the Year (2019, 2020) and was ranked as high as the No. 7 player in the country.

Kentucky is returning seven starters along with five pitchers, including super senior Humes who took advantage of the NCAA’s extended eligibility.

Junior catcher Kayla Kowalik leads the way among returners., hitting .373 last season with 31 runs and 13 RBI’s. Coach Lawson said that there was a chance that Kowalik could be the best lead-off hitter she has ever coached at Kentucky.

“I am a very confident person in my abilities and my skills,” Kowalik said. “Very rarely do I look at a challenge when it comes to offense and I’m like deterred from it.”

She made an impact early in Kentucky’s second game with her first career home run.

Returning along with Kowalik is senior infielder, Mallory Peyton. She comes into this season having led Kentucky in home runs (11) last season, batting .379 with 35 RBI’s.

Peyton, who plays first base, is going to be the only infielder returning to her natural position, according to Lawson.

Peyton clinched the win for Kentucky in their third game against Samford over the weekend, bringing the final score to 12-9 and improving the Cats to 3-0 to start the season.

The ultimate goal for this squad is to make it to Oklahoma City for the college softball World Series.

“That’s why you picked Kentucky,” Lawson said, “You don’t come to Kentucky if you don’t want to be in the World Series.”

Kentucky made their first ever World Series in 2014, but haven’t been back to the tournament since.

“Win or lose, that is always the goal. That’s why they work so hard in the offseason,” Lawson said. “That dream of going to Oklahoma City is still dangling out there.”

Veteran leadership will help Kentucky on that path, though not necessarily in their usual roles.

“I look for Autumn [Humes] to get a significant number of at-bats and be in the meat of our order,” Lawson said.

She said that Humes was one of the hardest workers over the pandemic and anticipates Humes as being one of the anchors for the team moving forward.

Kentucky is also bringing back leading pitchers in Meghan Schorman and Grace Baalman.

Sophomore Sloan Gayan also took the mound for Kentucky on Saturday in the third inning.

For the Cats, the key to the season is finding a balanced rotation. With players new and old hungry to return to competition, it’s anyone’s ball game. They’ll look to improve on defensive struggles that Samford took advantage of in Saturday’s series as they head to North Carolina for their next series.

Kentucky will take on UNC Greensboro Feb. 18 and 19 at 4 p.m. and 3 p.m., respectively, before traveling to the Campbell Invitational the next weekend.