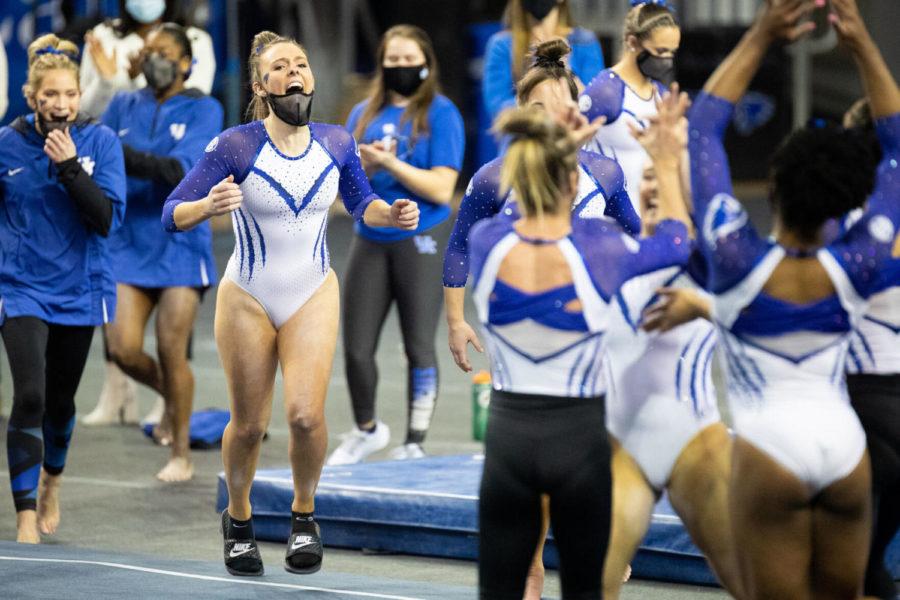 After falling to Florida on the road last week, UK gymnastics returned to Lexington and emerged victorious on Senior Night, defeating the No. 2 LSU Tigers 197.100-196.800.

Kentucky started off hot with their vault event. Isabella Magnelli, Cally Nixon, and Josie Angeny all earned a 9.900, which helped the Wildcats total a 49.375 and get an early head start.

Nixon continued her strong night by doing exceptionally well on the uneven bars, recording a 9.975. That number, along with 9.850’s from Angeny and Shaelyn Luksik, plus a 9.825 from Raena Worley, contributed to a second straight 49.375 event score. This kept Kentucky in front by the slightest of margins, 98.750-98.650, halfway through the match.

Beam came third for the Cats, while LSU headed to the floor. Mackenzie Harman started off with a 9.300, but was picked up by her teammates, who all went 9.700 or higher. The 49.030 score was the lowest score in any apparatus for Kentucky though, and had them trailing the second-ranked Tigers 147.975-147.800 with one remaining for each school.

Fortunately for the Cats, the beam proved to be even more difficult for LSU. Following a few slip-ups, the Tigers scratched out only a 48.825. A quality floor performance would give Kentucky back-to-back home wins over top-five teams.

Raina Albores and Bailey Bunn were up to the task, showing out in their routines. Albores put up an impressive 9.925, with Bunn a mere fraction behind at 9.900 to pace things. 9.825’s from Angeny, Makenna Clarke and Anna Haigis sealed the deal for the Wildcats, who clawed their way to victory behind a new season-high total.

“We got off to a great start tonight on vault and bars and then showed tremendous toughness fighting through a beam rotation that could have derailed our night,” head coach Tim Garrison said afterward according to the university. “Floor was solid, as we have come to expect from this group, and we were able to pull off the upset.”

Worley claimed the fourth all-around individual win of her sophomore season (39.500), followed by Bailey Bunn at a season-high 39.450. Coach Garrison was proud of the resiliency the team demonstrated through its effort after the rough beam showing.

“I am most pleased with the resolve of this group,” he said. “They are finding ways to be successful when they struggle… they aren’t letting doubt creep in and affect performance. It was a big night for the program, and the win was only part of why.”

“This team just proved to the most important group that they belong competing against the best this conference has to offer—themselves.”

Madison Averett, Mackenzie Harman, Megan Monfredi, Ella Warren and Allison Snyder were honored in the Senior Night ceremonies following tonight’s match. Each competed to varying degrees over their careers, and got to head off the mat at Memorial Coliseum on top.

Kentucky rounds out its regular season in Athens next Friday, where it will compete against No. 15 Georgia. The Cats and Bulldogs will do battle at 7:00 p.m. E.T. on SEC Network.