Ground-breaking kicks off next phase for research campus 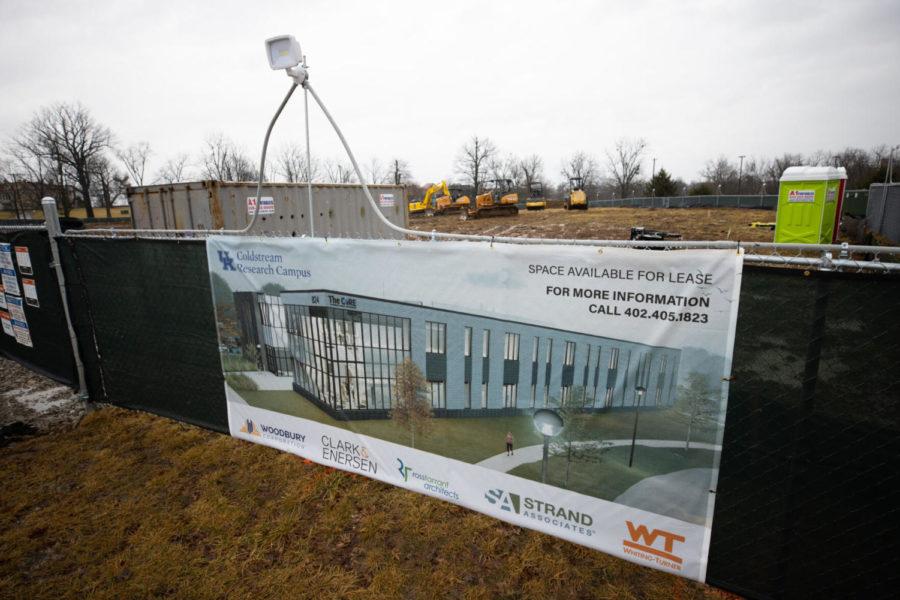 A who’s who of Lexington leaders gathered on Tuesday, Feb. 23, to take the next step in one of the university’s less flashy ventures.

UK first acquired the Coldstream land in 1957. The new laboratory will be home, not only to UK’s new research lab, but spaces rented out by other entities. Kentucky Technology Inc. is expected to lease a large portion of the space.

The company’s president George Ward also serves as executive director of the Coldstream campus, which totals 735 acres. The new facility is estimated to be 40,000 square feet in total.

“UK research projects/companies will also be housed at The Core, and of course students are both involved in and critical to UK’s research efforts,” UK public relations officer Jenny Wells-Hosley told the Kernel via email.

The Core will be a wet lab, meaning that materials can be experimented with using water and direct ventilation with pipes made specifically for this usage. Wet labs require more overhead costs but can draw in many contributors since there is a need for this type of facility in central Kentucky. This type of lab is especially useful in dealing with biological matter.

“Research done on behalf of the Association for University Research Parks has indicated that the #1 reason a company locates at a research campus is to have access to talent – university students, graduates and faculty. Our goal at Coldstream is to continue to grow well-paying jobs of meaning and purpose that will provide more UK graduates a career path without having to leave Lexington,” Ward told the Kernel over email.

Ward said that there will be at least 10,000 square feet of laboratory space included in “The Core.” Since there is not currently much lab space available for private companies, most of this space has already been leased. There is currently less than 1,500 square feet of space still available for companies to lease. More than 50 STEM-related businesses, employing more than 2,000 people, already reside at the Coldstream property.

UK only operates 9,000 square feet of the existing structures. According to a university press release, the new facilities were made possible “through a public-private partnership with the Woodbury Corporation, along with support from city, state and local officials.”

The site has undergone zoning changes to enable apartments and townhomes to be built on site. Up to 15 percent of the land may go to residential spaces, following an Urban City Council decision in 2018. That decision made Coldstream a P-2 zone – the only one of its kind in Lexington – and was designated a “university research campus” by the city.

The zoning change allowed for more density, smaller lots and removed the requirement that buildings be set 50 feet back from the road. In his speech at the ground-breaking, Capilouto thanked the city of Lexington for the zoning change and for “establishing a tax increment financing district” tax change that provides incentives to those looking to develop at Coldstream.

UK will also receive funds from a state product development initiative grant. In the next year, ownership of 200 acres next to Coldstream will transfer from UK to the city of Lexington for business development. The Core research building is scheduled to be finished by early 2022. This construction is the latest in $2.6 billion in capital projects undertaken by the university since Capilouto became president.