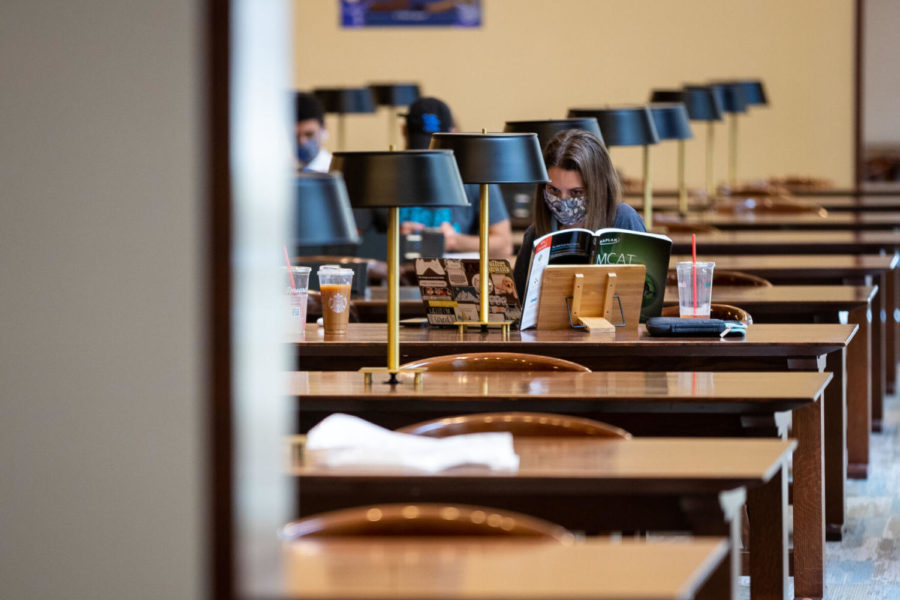 A masked student studies in the William T. Young Library during the first day of classes for the fall 2020 semester on Monday, Aug. 17, 2020, at the University of Kentucky in Lexington, Kentucky. Photo by Michael Clubb | Staff

Many people expect libraries to be quiet, but few have seen a library that’s dead silent.

However, since the advent of COVID-19, a lot have things have changed in the University of Kentucky’s libraries. The once crowded halls of the William T. Young library now have less people passing through the first floor. Reception desks now have a plane of glass between staff and customers. Signs reminding people to wear a mask properly and to stay six feet away from people are posted around the foyer. A lone uniformed official stands patrolling the foyer to make sure that people continue to wear their masks.

Still, you can find students along the floors of the several story structure and get a sense of normalcy as masked students study and converse with each other. Abbi Strenen, a graduate student that started attending the University of Kentucky after coronavirus began, said that she felt more confident visiting the library after getting both vaccination shots.

“I didn’t come in the beginning, but I’ve been trying to come more as the cases went down,” Strenen said. “UK has been doing a good job of social distancing.”

Brenren also talked about the difficulty of having her classes online during the pandemic.

“My Internet can get really bad,” she said. “I have a few roommates so the WiFi can get crowded.”

While the main library seems to be handling things well, William T. Young Library is only one of the university’s eight libraries. The Design Library, Education Library and SCRC are all only accessible by appointment at the moment, while the other four specialized libraries are still open to the public.

The Lucile Little Library is a facility dedicated to the arts and the College of Communication, fittingly situated behind the Fine Arts Building on Rose. The normally busy section of Rose between the two areas is quiet, only inhabited by a few students and the sounds of construction.

While the Young library was quieter than usual, the Little Library was a ghost town, with only the scarcest traces of people. Two such individuals were  tudent librarians Jacqueline Apell and Anna Fatta, who explained some of the differences they have seen in the past year . Apell said that the library had to cut back their hours, remove public access computers and stop holding classes on the premises. While the Fine Arts Library used to have shows, she said all public events are now on hold.

“When we get books in from libraries they have to be quarantined in a little room,” Apell said.

Fatta said that she’s had to explain more of the online systems, but that the libraries are still safe spaces for students despite the darkness of COVID-19.

“Workers have tested positive, and it’s never spread,” she said.

More than 1,000 people have signed a petition for UK to return its libraries’ hours to pre-pandemic availability, saying that students with jobs can not access the library in their normal schedules.

Despite those limited hours, there appears to be a light at the end of the tunnel for UK Libraries nearly a year after the first coronavirus cases hit Lexington.