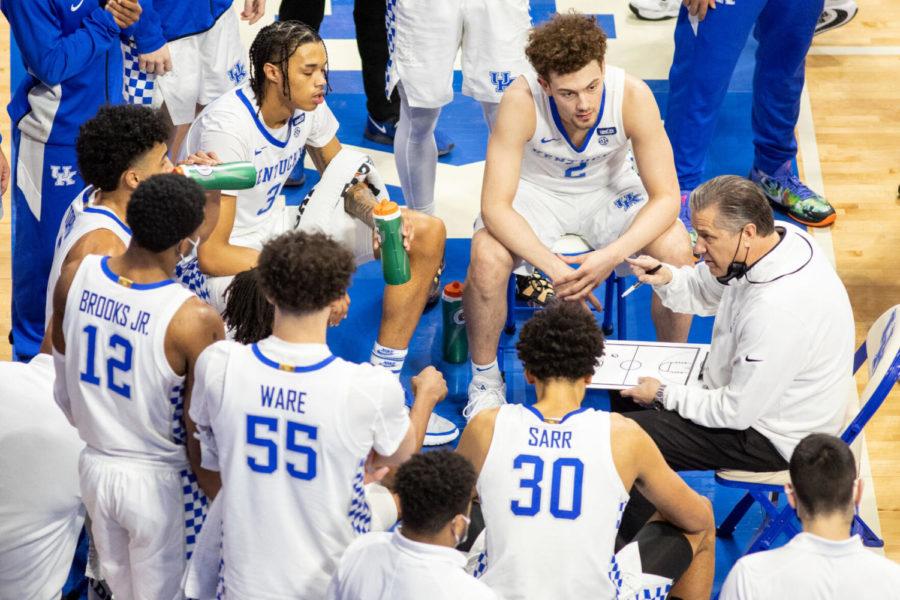 The most recent John Calipari campaign did not go the way anyone in or around Big Blue Nation could have imagined. Despite that, the Cats boast a number of potential pro prospects, and have already seen announcements from the majority of the 2020-21 roster regarding next season.

See who all is returning to Lexington, transferring out or headed to the next level:

A native of Pontiac, Michigan, the uber-talented and athletic big man was the only Wildcat to garner an All-SEC award this season and the lone Kentucky player to improve his NBA Draft stock throughout the season. Jackson started 18 of 25 games in 2020-21, averaging 8.4 points, 6.9 rebounds and 2.6 blocks per game. The rejection average was 15th in the country prior to any true postseason play.

“Playing in the NBA has always been a dream of mine,” Jackson said in a press release on Wednesday. “I am looking forward to the process and seeing what my future holds.”

Unlike teammates Terrence Clarke and B.J. Boston (see below), Jackson is not hiring an agent at this time, leaving the door open for a return. It’s widely believed that he will give great consideration to a second season in blue and white if he doesn’t feel he’ll be selected in the draft lottery (top-14 picks).

Clarke became the second Kentucky player to declare for the draft when he revealed his intentions yesterday afternoon. He missed the entire regular season SEC portion of the schedule due to a leg injury, but returned for the conference tournament matchup with Mississippi State. Prior to his injury – which occurred against North Carolina and severely hampered his ability in the Louisville contest – the No. 8 prospect according to Rivals averaged 13.8 points, 3.6 rebounds and 2.6 assists through five outings.

“Having the privilege to put on the Kentucky uniform and play in front of the BBN was always a lifelong goal of mine,” Clarke said in a press release Friday evening. “I hope to make you all proud as I pursue my dreams.”

Clarke will sign with an agent and not return to Kentucky, according to the release.

The Sierra Canyon product was the highest Wildcat recruit of 2020-21, ranking fifth on the 247Sports top 100. He started all but one of the 25 Kentucky games, leading the team, alongside Davion Mintz, with 11.5 points per game.

“It was an honor for me to play for the Big Blue Nation,” Boston said according to Saturday afternoon’s press release. “Being a professional basketball player has been my dream for as long as I can remember. I’m excited for this opportunity and I know that I will have the foundation to handle anything that comes my way because of my time as a Wildcat.

Like Clarke, Boston is forgoing his remaining eligibility and will remain in the draft.

The redshirt freshman announced through the Falmouth Outlook that he will be sticking with the program. The former Pendleton Co. Wildcat shined in two outings against Mississippi State, scoring 23 points both games versus the Bulldogs, and will look to expand his role beyond spot up shooting in 2021-22.

Allen averaged 5.4 points and 1.5 rebounds in just over 14 minutes per game.

Ware revealed through an Instagram story post that he would be coming back to Lexington for his sophomore season. The New Jersey native averaged 2.0 points and 3.0 rebounds per contest, but showed out a couple of times, grabbing 13 boards in the first meeting with Mississippi State and scoring eight points with ten rebounds against Missouri.

Askew’s father told Kentucky Sports Radio that Askew is “locked in” to the 2021-22 season. It would have been a shock the see the freshman guard depart, but it nonetheless confirmed widely held suspicions.

Jacob Toppin has not had any transfer rumors, and should be returning to Kentucky, but nothing official has been announced to this point.

Fletcher announced just two days after the season concluded that he would be entering the transfer portal. The St. Louis product had a stellar Wildcat debut, recording nine points and three assists against Morehead State, but quickly fell out of the rotation just two games later. Coach Cal asked him to step away from the team on December 21st, and he only appeared in three games during the conference schedule. He saw six minutes of garbage time action during the regular season finale versus South Carolina.

Olivier Sarr, Keion Brooks Jr. and Davion Mintz have not officially announced their intentions to this point. This story will be updated when more announcements come.