College student stimulus payments: a Band-Aid, not a cure 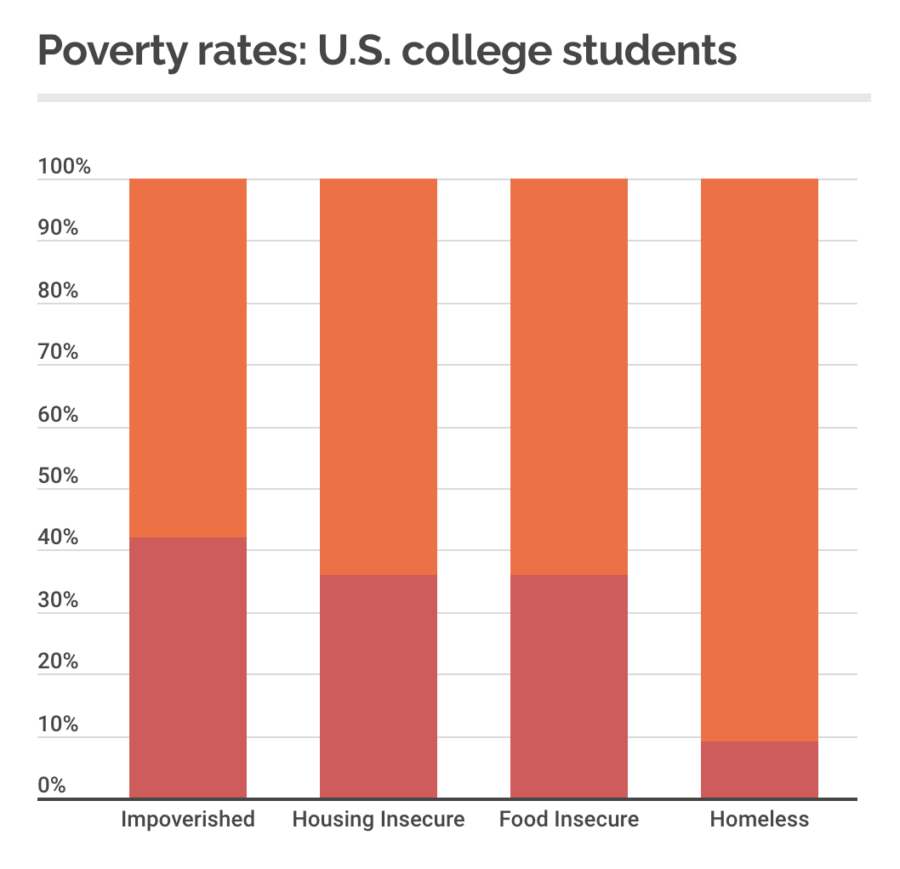 While the incoming stimulus payments may be temporarily helping broke college students survive, a one-time check will never be enough to fix an unbalanced system.

The “broke college student,” is one of the most common tropes across the world. A poll of college students on any campus would yield countless stories demonstrating the hardships of affording college life. There are social media accounts with millions of followers dedicated to “cheap college hacks.” Generations of young adults have begun a new chapter in their lives by going to college, only to be faced with financial hardship on top of their schoolwork and personal lives.

While it’s certainly entertaining to see pictures of college students fix their showerheads with Mountain Dew bottles or warm up pizza on a clothing iron, financial problems are a serious challenge that far too many students face.

College students face among the highest rates of poverty out of any demographic in the United States, with 42% of all independent students being classified as “impoverished.” 36% of college students are food insecure, meaning they do not know when their next meal will be, nor where it will come from. Another 36% are housing insecure, and do not have the means to pay for their dorms, are living with friends, or in substandard conditions such as in a car. Even more devastating, 9% of college students are completely homeless.

With poverty affecting more than one-third of college students, it’s important that we understand what forces are behind this widespread systemic issue.

Federal funding for public universities, and education in general, has been dropping in the past decade. More than $9 billion in Education Department funding was cut between 2008 and 2017, which means schools were responsible for an increased portion of their operating costs. This translated to substantial increases in tuition and living costs that students are responsible for paying (the average college tuition increases by 6.8% every year).

On top of that, federal grants for students’ education have decreased, and now cover a smaller fraction of a college’s cost-of-attendance. Altogether, this means today’s college students are paying significantly more to attend college and getting less financial assistance than just a couple years ago. This especially poses a challenge for students coming into college from low-income backgrounds.

A college education is often branded as the best mode of socioeconomic mobility. For decades, young adults have been told that going to college leads to a better job, a stable income, and a chance to escape poverty for good. But when students from low-income backgrounds finally get the opportunity to go to college, oftentimes without the resources and assistance that more well-off students get in their childhood education and college-admissions process, they pay a proportionally higher share of their income to attend.

This means they have less money to pay for basic necessities like housing and food and class materials like textbooks, both of which have a substantial negative impact on their ability to succeed in class, as well as their mental and physical well-being.

Further, minority communities—particularly Black, Indigenous, and Hispanic communities—have higher poverty rates than other demographics. As a result, minority college students are among the most susceptible to both the financial challenges of college, as well as its adverse side-effects.

This creates a cycle of poverty, where low-income students who are able to attend college are burdened financially and psychologically, which makes their college experience significantly more challenging and disproportionately decreases their chance of escaping impoverishment.

The COVID-19 pandemic has only compounded upon these issues. As millions of Americans lost their jobs, it has never been harder to afford college. Thousands of college students have dropped out of college citing financial or health issues, and with increased financial pressure, students are struggling more than ever to afford the basic resources they need to survive, on top of the cost of their education.

There’s a little bit of hope: with the recent passage of the $1.9 trillion American Rescue Package, many Americans are entitled to $1,400 stimulus checks. While the previous two stimulus bills excluded many college students eligibility, there are a number of ways that students can now get some financial assistance.

If a student is listed as a dependent, the person who claims them as their dependent will receive $1,400 on the student’s behalf. If listed as an independent, students are directly eligible for the stimulus check. The bill also provides $40 billion in financial support to universities, of which they are required to spend half on emergency student grants (which UK has been openly offering).

While the recent round of stimulus is certainly a step forward in the current-day fight against college poverty, resource insecurity and financial challenges will continue to be a problem long after the pandemic is over.

For far too long, college students have struggled to make ends meet, taking a toll on their health, academic success, and livelihoods. While initiatives on campus, including the Basic Needs Campaign and Big Blue Pantry, have worked tirelessly to advocate for and ameliorate students’ needs, the overarching financial policies continue to overburden students and their families

I therefore urge policymakers, from our local Lexington city government to President Biden, to not only recognize the everyday struggles that college students face, but actively fix a status quo that makes attending and succeeding in college more and more difficult each year.