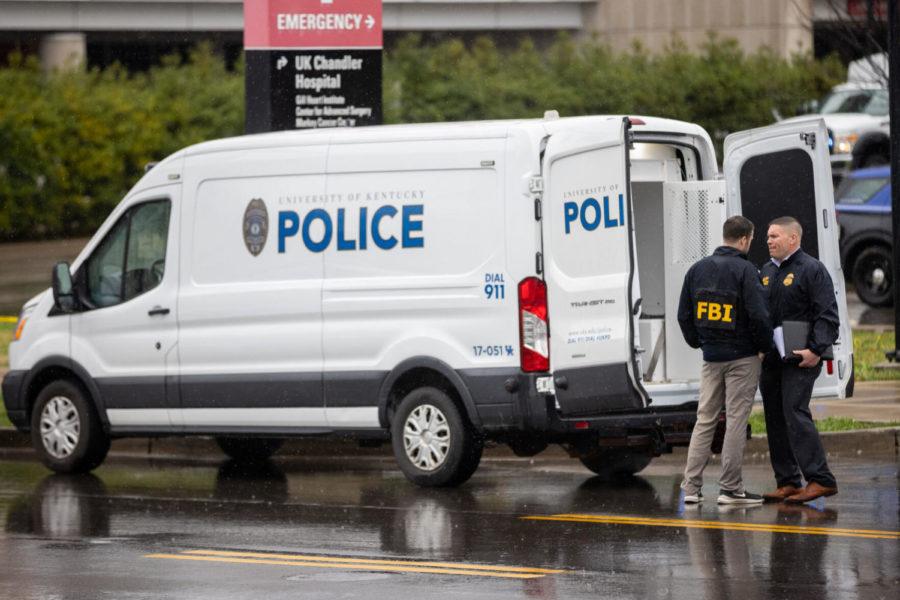 A FBI and ATF agent talk with each other during an emergency situation on Thursday, March 25, 2021, at UK Chandler Hospital in Lexington, Kentucky. Photo by Michael Clubb | Staff

When UK first issued an emergency alert to students about a situation at UK Chandler Hospital, many students were in class.

In the next few hours, as law enforcement cleared the area and arrested the suspect – 44-year-old Bryan Carroll – students reacted with concern and confusion to the crisis.

“We were in honors class … and we got the alert on it. They think that there’s a suspicious item. It is alarming, and I hope everyone’s ok, and I think that they’re taking the precautions that they need to,” said UK junior Laney Ruth.

Ruth said she did not know much about the situation but thought UK had done all they could by instructing students to avoid the area.

Other students felt UK’s alerts were lacking in information.

“I feel like the texts, they say ‘You can click this link, UKY Alerts, and it’ll give you more information.’ You click the link, it provides no new information, it just restates the same message. That’s frustrating,” sophomore Daniel Biggs said.

Biggs said he was concerned and hoped the situation amounted to little, though he could not be sure what was going on because of limited information.

Multiple other students told the Kernel they felt the same way about the alerts, the first of which said “avoid area surrounding UK Chandler ER at S. Limestone.”

A second alert at 11:16 a.m. instructed students and university employees to continue to avoid the hospital emergency room but said they could resume activities outside of that area.

“It was very vague,” said freshman Emma Pastirik. “They [the University] just said ‘There’s a situation, stay away from the E.R.’ Which I understand, they don’t want to cause panic.”

Like many other students and Lexington residents, Pastirik was concerned because of personal connections to UK HealthCare.

When senior Annie Bennett heard about the bomb scare, she was worried for her roommate, a nursing major taking classes at the hospital.

Some students on campus heard little about the situation, which escalated when police found two suspected explosive devices in Carroll’s car.

“I really have no clue what’s going on. I just know that I got a bunch of calls while I was just in class at the Student Center, so I just found out from our friend group chat that there was a bomb threat,” freshman Caroline Zappone told the Kernel.

“All I knew was that there was a situation going on, so I’m definitely worried, but I also don’t really know what’s happening,” Zappone said.

“I don’t really know enough about it. I just got the alert, and I was just kind of keeping away from the area, staying in the hall, doing homework,” Burroughs said.

Though the main road closure occurred at the front of the emergency room on Limestone, law enforcement also closed off the backside of the hospital where it abuts the University of Kentucky campus.

UK issued an all clear at 3:05 p.m. following a media briefing outside of the hospital. Despite the successful arrest of Carroll with no harm to those in the hospital, students were in the dark about the emergency.

“I have received it [information about what’s going on] via text, via email, via voicemail, via phone call,” Biggs said. “I still know nothing.”