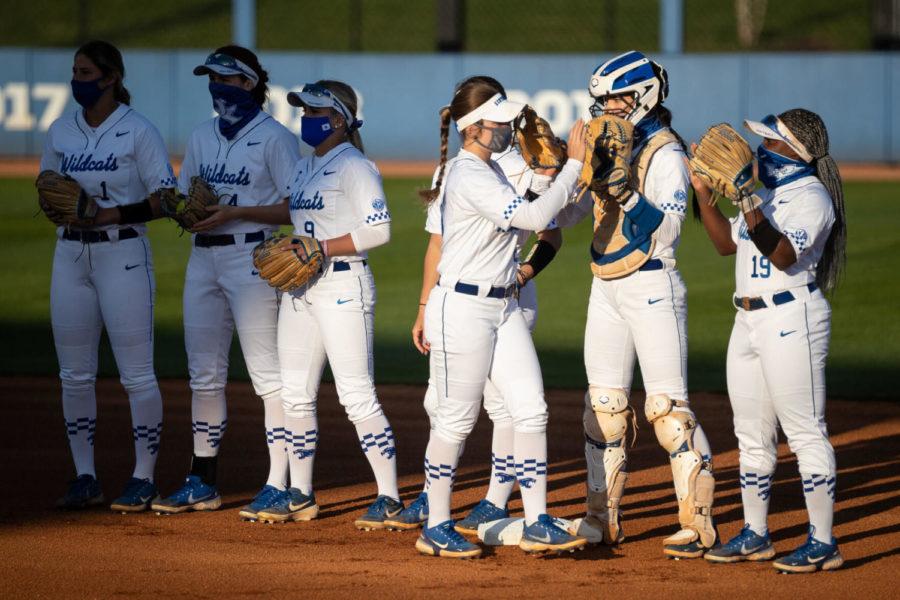 The starters for UK are introduced before the University of Kentucky vs. University of Georgia softball game on Monday, April 12, 2021, at John Cropp Stadium in Lexington, Kentucky. UK lost 5-2. Photo by Michael Clubb | Staff

“To be able to stay and grind . . . and stay in the game long enough to eventually win it, I think it says a lot about our resilience . . . we got stronger as the game went on,” head coach Rachel Lawson said after the victory.

Originally scheduled for April 7, a thunderstorm postponed the meeting of these two squads to Wednesday evening. The Cardinals came into this rivalry matchup after dropping their last three games, while the Wildcats lost two of their last three to Auburn.

Kentucky started things off with a double play on a line drive hit to first base by Louisville’s Rebecca Chung, ending the first for the Cardinals. The Wildcats couldn’t get anything going offensively in the bottom of the first either, who were retired after three batters.

After an uneventful first, Louisville’s Makayla Hurst went yard on the first pitch of the second inning. Kentucky’s freshman ace Erin Coffel had an answer for Hurst in the bottom of the second, however, homering to right field and tying the game at one heading into the third, her 16th of the season.

A tough third inning for pitcher Grace Baalman led to bases loaded twice for Louisville in the top of the inning. Taylor Roby’s RBI single, followed by Hurst’s fly out brought another run home and put the Cardinals up 3-1.

Kentucky had to play catch up in the bottom of the third. Tatum Spangler flied out to left field, bringing home an unearned run as Miranda Stoddard scored for the Wildcats before a Mallory Peyton strikeout ended the inning.

Autumn Humes came in as relief pitcher in the top of the fourth, immediately giving up two hits and a fly out to left field that brought Charley Butler home, extending the Cardinal lead back to two.

Kayla Kowalik brought life to Kentucky in the bottom of the fifth, doubling to center field just shy of leaving the park. After stealing third, pinch hitter Rylea Smith hit an RBI single, bringing Kowalik home and cutting the lead to one run before Renee Abernathy flew out deep to center, bringing home a game tying run heading into the sixth.

After a quiet sixth from both squads, Carmyn Greenwood (4-4 on the night) was brought home off Chung’s RBI single and the Cardinals took the 5-4 lead in the top of the seventh.

Tatum Spangler gave the Wildcats hope as she hit a gap shot deep to left center for a double. Johnson’s double on the next at bat brought Spangler home, tying the game once again and sending this rivalry game to extra innings.

Neither team could get anything going in the eighth as the game headed to the ninth inning. Kentucky retired Louisville in the top of the ninth quickly and found themselves in a position to win with runners on second and third as Johnson stepped up to the plate, flying out to right field and advancing Jaci Babbs home to win the ballgame, 6-5.

The Wildcats finished with six runs on nine hits with two errors. Kowalik finished 3-5, one 2B and a run to lead the Wildcats to their 31st victory of the season.

“This [win] is so important,” Kowalik said post game. “It builds momentum and takes us into this weekend’s series against LSU.”

Kentucky’s next matchup will be this Friday at 6 p.m. against LSU in game one of their three game series in Lexington.