Bullets overtake Rapids with dominant second half on opening day 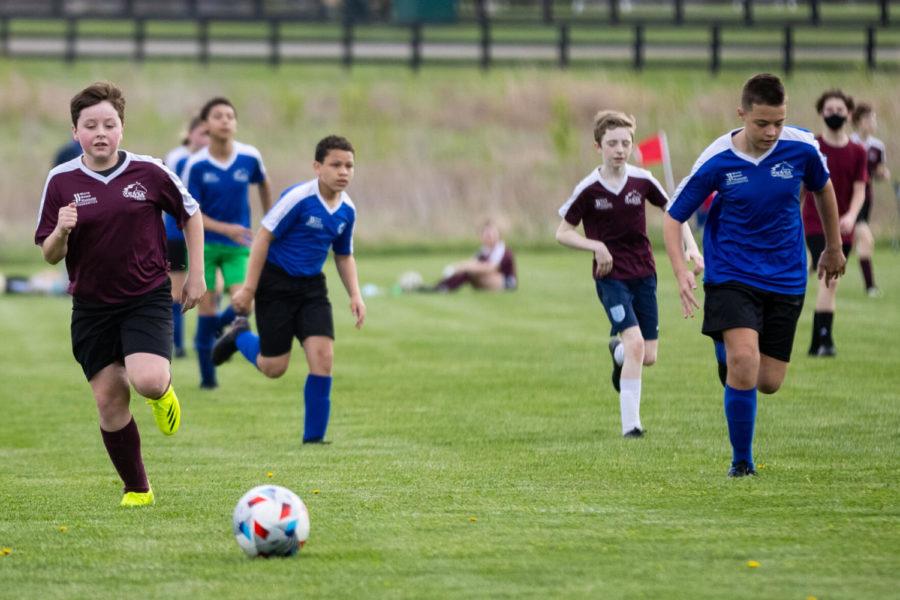 In the distance, heaps of thunderclouds converged in preparation for a morning storm. But the clash of the heavens was nothing compared to the battle taking place on the far field of Masterson Station park, where under-14 teams the Rapids and the Bullets met for the first soccer match of the 2021 season.

The Bullets were anchored by their keeper Chase, who stayed in goal for the hour-long game and notched a series of excellent saves. A defensive-minded first half turned the contest into a battle of wills as the teams appeared exactly evenly matched.

The Rapids, in maroon for their season debut, took the first shot on goal in the 12’ minute, when a corner kick was nearly headed in but headed out by a defender from the Bullets, clad in blue. After trading a series of corner kicks, the Rapids took another shot on goal that was blocked by Chase and the Bullets’ returning attempt narrowly missed the pipe.

Those close calls led up to the first goal by the Bulletss in the 21’ minute, followed by a third shot on goal. The Rapids had a chance to equal when their striker beat all the defenders to have an open shot, but either the dew or nerves caused him to snub the shot. Another attempt in minute 30’ was blocked by the Bullets’ keeper.

The Rapids had better luck with a long-range shot from 35 yards out that arced just over the fingertips of the leaping goaltender, bringing the score to 1-1 heading into the half.

Shannon Hopper, whose son plays for the Rapids, said at the half that the team needed to convert attempts into goals to pull off the win.

“I would like to see some balls going in the goal and some better defense,” Hopper said. In this Lexington Youth Soccer Association game, she said the players are most excited to see friends again after last spring’s season was canceled.

By the time the second half began, the rust from the two-year hiatus had worn off and the Bullets came out kicking. The Bullets scored in the first minute of the second half, sneaking a shot past the Rapids’ replacement keeper.

That first goal brought the score to 2-1 but was only the beginning of a ceaseless onslaught by the Bullets that left the Rapids unable to keep up. Bullets’ strikers scored twice in quick succession in the next seven minutes to bring the score to 3-1, then a fourth goal that slipped straight out of the keeper’s hands.

The Rapids attempted to rally and scored a second goal when a shot bounced off the crossbar and maroon jersey rushed in to close out the rebound. But that effort seemed only to spur on the Bullets, who wore down their opponents with another three goal, one of which was a lovely chip shot.

Facing a five point deficit the Rapids got lucky when an off-the-crossbar shot rolled into the goal, but Chase managed to stop all direct shots in the remainder of the game to leave the final score of 7-3.

After outscoring the Rapids 6-2 in the second half, Bullets coach Donnie Wakefield said the outcome was due to renewed hustle.

“We had a few players that hadn’t played since they were about three,” Wakefield said. “And so it’s just a learning curve, and hustle’s the name of the game. And that made a big difference for second half.”

Wakefield kept his post-game speech short as the rain began to fall and the games on other fields were called off. In the remaining stretch of the season, Wakefield would like to see his players have fun above all else.

“Be outdoors, enjoying things that’s the – you know, win or lose, it doesn’t matter,” Wakefield said. “Just as long as they’re having fun and falling in love with the game.”

His son plays on the the team and he is relieved to see the players able to socialize.

“It’s hard to keep them from chatting, because they haven’t seen each other for so long,” Wakefield said. “But it’s actually a good thing. It gives them something to get them off the couch.”

Off the couch, indeed: the Bullets’ fighting form granted them a 1-0 start to the season, which will continue next Saturday.