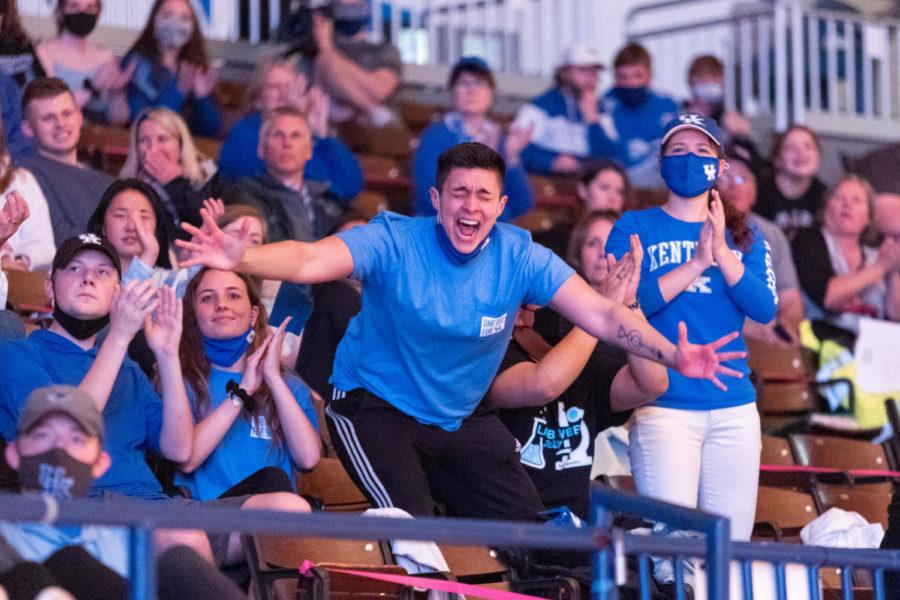 Erik Osorio, a freshman architecture major, celebrates during a watch party for Kentucky volleyball as they compete for the national championship on Saturday, April 24, 2021, at Memorial Coliseum in Lexington, Kentucky. UK won 3-1. Photo by Jack Weaver | Staff

The crowd of approximately 200 was not lacking in enthusiasm. Each Kentucky point was met with a round of applause loud enough to have come from a crowd double the size. Fans showed visible signs of stress when things weren’t going the Wildcats’ way, anxiously holding their head in their hands and restlessly moving around in their seats.

As the night wore on, the energy and applause only grew, as emotions heightened. The crowd was loudest when Kentucky came from behind to even the score to 13-13 in the fourth set. After that point, the Wildcats never looked back.

A group of six sophomore UK students sat in the front row, although they were standing and cheering more often than they were sitting. Matt Sak was particularly enthusiastic, rocketing up from his seat every time the Wildcats scored a point. He said he is new to the UK volleyball fanbase after being inspired by their historic run this season.

“I want these girls to know that I’m here for them and I’m giving it my all, just like they are right now,” Sak said. “It just comes from the heart. I just love UK so much.”

Kristina Sosa, another front row sophomore, said she was super excited to be able to watch this year’s team in a group setting after a year of COVID.

“I think we’re about to make history,” she said after Kentucky’s win in the second set.

She was right. After losing the first set, the Wildcats pulled a three-set streak to win the NCAA title for the first time in program history.

“It’s just crazy that I’ve lived here my whole life and I got to see a title in my time at Kentucky,”

“It’s just so surreal, I’ve watched one other title at UK before and it’s just such a good feeling,” said Nate.

The crowd wasn’t limited to UK students. Families with young kids, teenagers and older fans made up about half of the attendees.

Pat Whelan brought his two daughters to the watch party. Lily, 15, and Lola, 12, play volleyball for KIVA, a top volleyball club team in Louisville, and love following UK volleyball. Whelan said they are crazy about Alli Stumler in particular, who is a KIVA alumna.

“They watch them all the time,” he said. “We were watching, a week or so ago, games that were played three and four years ago.”

Ana Luna, who runs her own volleyball league for Hispanic Kentuckians, Liga Hispana de Volleyball, also brought her family to the watch party. Luna said it’s been really fun to see the Kentucky women play so well throughout the season.

Greenlee Eaton’s eyes lit up as she talked about watching the national championship. Eaton, 13, is just starting to play volleyball herself, and said it was exciting to be at Memorial Coliseum Saturday night.

“It’s like super cool because you know you were there to see the very first SEC team to win. So that’s really cool being a part of that,” she said.

There were more than a few watery eyes in the Memorial Coliseum crowd as the confetti rained down on the victorious players down in Omaha. Chris Kalb, a huge UK fan who holds season tickets to nine sports, was speechless as the emotion of the win set in.

Just five years ago, he had hoped to witness a Kentucky volleyball SEC title in his lifetime, and now, they were crowned NCAA champions. He said he predicted that the final match would be a contest between Kentucky and Texas several days ago, and never doubted them for a second.

“I said you know, everybody’s talking about how we’ve got to be wary of Texas; Texas needs to be wary of Kentucky, because we have so many skilled positions. Not just one or two, we’ve got the whole team.”

Freshman Kathan Devaraj said it was cool to experience a national championship in his first year at UK.

“I liked the comeback, the fact that we lost the first set,” he said. “We were resilient, we came back and won three sets straight.”

After the ESPN coverage was over, the crowd exited the stadium, their broad smiles in stark contrast to the dark, rainy night. After a disappointing basketball season, the Wildcats were back on top, back to normalcy.

“Obviously this has been a really hard year for all of our students, and it’s just super exciting that we can come together in a separated party and all watch it on TV,” said UK senior and student government president Courtney Wheeler. “Big congratulations to the volleyball team.”