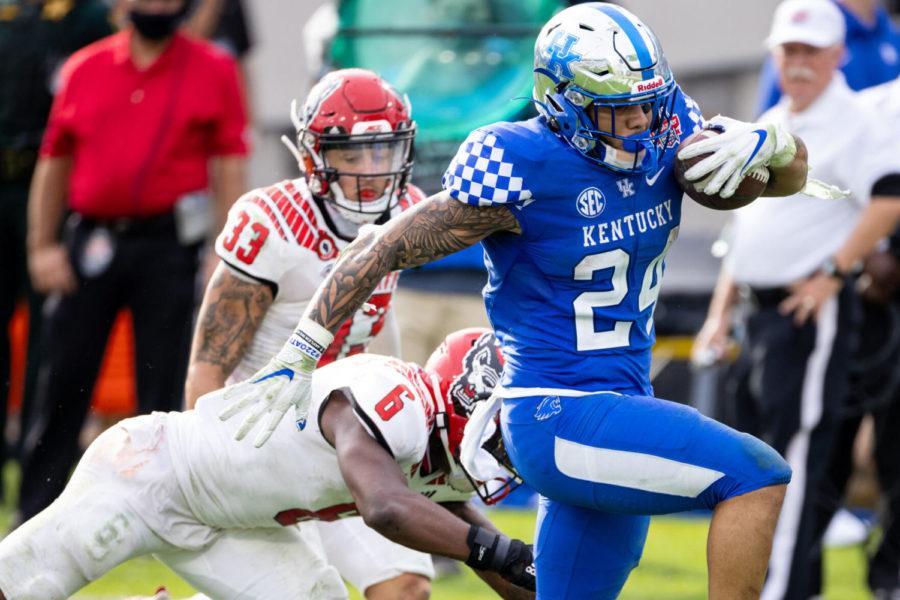 Kentucky Wildcats running back Chris Rodriguez Jr. (24) runs the ball into the end zone to give the Cats a 23-14 lead late in the forth quarter of the University of Kentucky vs. North Carolina State TaxSlayer Gator Bowl game on Saturday, Jan. 2, 2021, at TIAA Bank Field in Jacksonville, Florida. Kentucky won 23-21. Photo by Michael Clubb | Staff

A total of eight Kentucky football players have been named to the 2021 Athlon Sports Preseason All-Southeastern Conference team.

Kentucky’s eight selections are tied for third most in the conference with Auburn, Ole Miss and Mississippi State. Only Alabama (15), Georgia (15), Texas A&M (9) and LSU (9) had more.

Kinnard, listed by Pro Football Focus as the top rated run-blocker in the nation and finalist for the 2020 Outland Trophy has started 26 consecutive games for the Wildcats. The 6-foot-5, 338 pound lineman graded at 88 percent in 10 regular season games last year with 40 knockdown blocks and 138 blocks at the point of attack.

Paschal, a two-time captain for Kentucky was named fourth-team All-SEC by Phil Steele’s Football Magazine and All-SEC Honorable Mention by Pro Football Focus in 2020 after recording 32 tackles, 6.5 tackles for loss, one sack, one quarterback hurry and one interception in 11 games after switching positions from linebacker to edge rusher.

Rodriguez, Kentucky’s rushing leader in 2020 finished the year with 785 yards and 11 touchdowns despite missing two games due to COVID-19 protocols.

Robinson, a Kentucky native that transferred from Nebraska last season led the Huskers with 51 catches and 461 receiving yards in eight games. He was on the Paul Hornung Award Watch List and he earned honorable-mention All-Big Ten honors last season.

Mark Stoops and company have high hopes for Robinson heading into this upcoming season.

Fortner is returning to the Wildcats for a fifth year following the extra year of eligibility brought forth due to the COVID-19 pandemic. In 42 career games, he’s recorded 23 consecutive starts at right guard and graded out at 82.9 percent in 10 games played with 26 knockdowns and 146 blocks at the point of attack in 2020.

Corker’s 24 straight starts at safety make him the most experienced defensive back on Kentucky’s roster. As a junior last season, he finished second on the team in tackles (77) behind The Washington Football Team’s first-round draft pick Jamin Davis. He also added 2.5 tackles for loss, two interceptions, two pass breakups and a forced fumble which earned him All-SEC Second Team honors by Pro Football Focus and Phil Steele.

Square, a 2020 team captain recorded 60 tackles, four quarterback hurries, 2.5 tackles for loss and a fumble recovery. In his 36 career games played, the linebacker received a start in 22 of them.

Last but not least, Ali is Kentucky’s most experienced wide receiver under Mark Stoops who is taking advantage of the fifth year eligibility rule. In 2020, he recorded 54 catches for 473 yards and a touchdown.

Kentucky football kicks off their season Sept. 4, 2021 with Louisiana Monroe at Kroger Field.