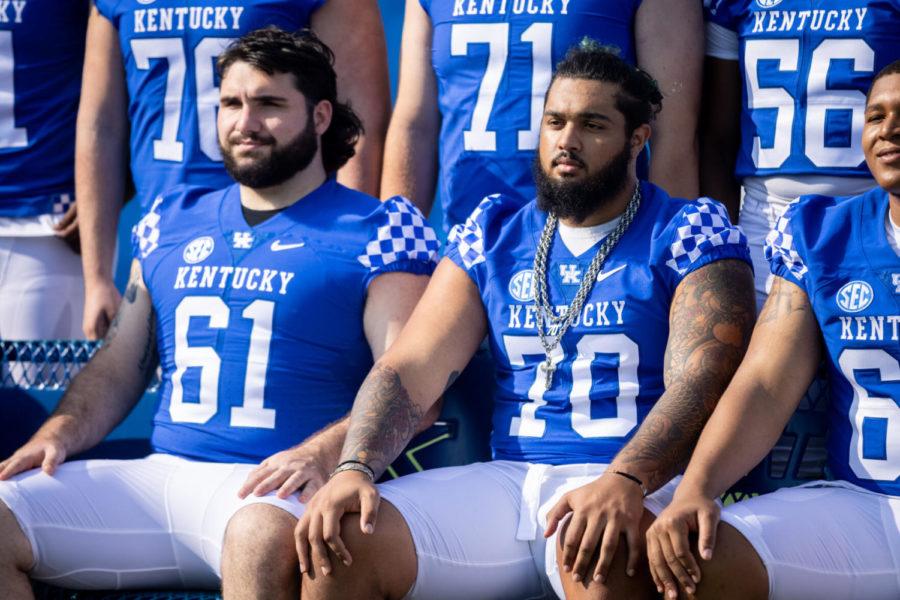 Kentucky’s offensive line wait to get their picture taken during the UK football media day on Friday, Aug. 6, 2021, at Kroger Field in Lexington, Kentucky. Photo by Michael Clubb | Staff

Many Kentucky football fans were surprised to hear back in January that Darian Kinnard, who is regarded as one of the top offensive tackles in the nation, decided to return to Lexington for one final season.

The season hasn’t even begun and that decision is already benefiting him. Kinnnard is on every award list you can imagine, including being named a first team All-American by Pro Football Focus, 247Sports and more.

“I’m trying to prove to everybody that I’m better than them,” he said about being recognized for these accolades. “At the end of the day, yeah, people are watching, but my personal goal is to be the best tackle in the draft. My challenge is to go out there and be better than every tackle on the (award) lists.”

The 6-foot-5, 345-pound tackle has earned himself a spot atop many experts draft boards after recording run-blocking grades of 89.1 in 2019 and 91.9 in 2020. He was projected as a second to third round selection for the 2021 NFL Draft, but he felt like he could be higher.

“There was a lot of back and forth, but I think the deal-breaker, personally, was the fact that I didn’t feel like I was ready for it to be a business,” he said. “I love the game of football too much to look at it as business.”

“Even talking to guys who left, (the business side of football) changed the way they think of the game,” Kinnard said. “I love football with a passion, I love the guys around it and when you add a lot of money to it … at any moment, you could be traded, picked up, dropped, cut. I feel like I needed one more year to mature and mentally prepare for that.”

Despite not wanting to see football as a business, the Division One college sports ranks were changed forever last month with the introduction of name, image and likeness laws throughout the country. Kinnard, however, doesn’t foresee himself signing any major deals with any companies/businesses.

“I have what, six months left? I’d rather focus on what I need to focus on, make sure that I achieve my personal goals and not get sidetracked with some loose change.” he added, “I feel confident that I can focus on my craft to make sure I get paid (next year) rather than just a couple thousand.”

He said if NIL came out a year ago, he’d be more on top of it, but right now he’s not trying to rush anything because he feels confident about where he’s at right now.

“Trying to focus on not just school or football, but then NIL and trying to get my name out there, I feel like it’ll just sidetrack some people,” Kinnard said. “I feel like it’s a smarter decision to be dedicated to your craft than some side business.”

“If I stay on this path, it’ll pay off a lot more than possibly messing up with NIL, since it’s so new.”

Kinnard also wanted to become a leader on this years Kentucky squad, help the younger linemen learn and obtain more film at left tackle to increase his draft stock next year, where he’s projected to be a first round pick as of now.

Despite earning praise for his prowess at right tackle, that isn’t his natural position. “The last two years, I played right because the team needed a right tackle,” he said, simply.

“A lot of people don’t remember, but I played both right and left freshman year,” he said. As a freshman, Kinnard was a backup for Bunchy Stallings and current Detroit Lions OL Logan Stenberg.

Kinnard said that he’s gotten used to the muscle memory of blocking on the right side rather than the left when it comes to certain drops and angles. He sometimes struggles opening his hips too wide when dropping back because he’s not used to the left side, but believes he’ll get that cleaned up by the time the season opener rolls around next month.

As a projected first rounder, he’s ready to show his versatility and willingness to play either side of the line. “At the end of the day, it’ll be more of a job than what I want to do,” he said. “If they’re paying me money to play a certain position, I’m not going to argue.”