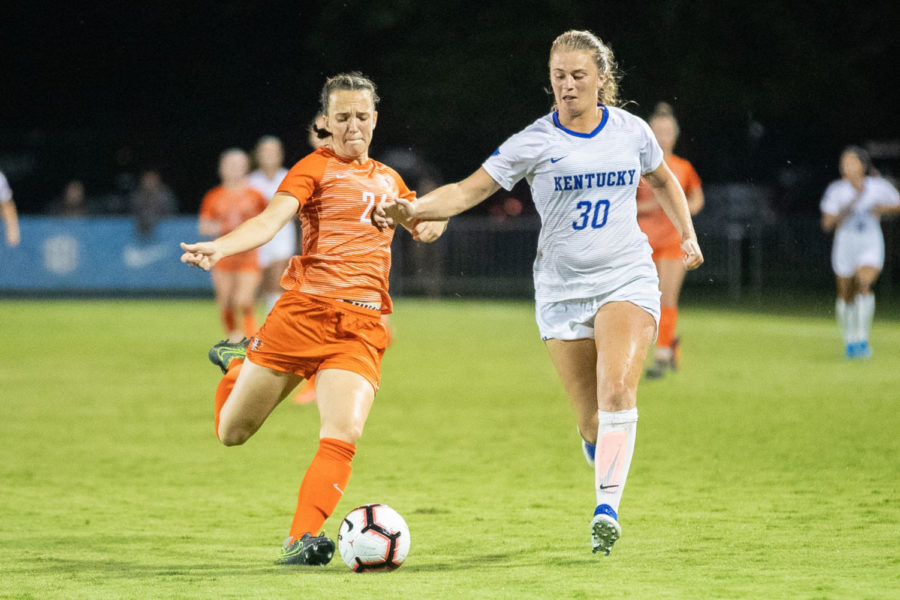 Kentucky’s first victory of the season came in the sweetest way possible — featuring a Jordyn Rhodes hat trick in their home opener at The Bell.

UK Athletics kicked-off their first home sporting event for the 2021-22 calendar on the right foot Sunday afternoon. Coming in, both teams were taken to overtime against Purdue and Wright State, respectively and were each looking for that first win of 2021 to find some momentum in the early season.

The feeling out process for both squads took up the majority of the first half; neither team dominated the other’s side of the field early. Kentucky led the possession total 6-4 during the first 45 minutes.

Marshall’s goalkeeper Courtney McVicker was kept busy, though, as Kentucky totaled eight first half shots, three of which were on goal. Rhodes led the charge with three shots (one SOG), sophomore midfielder Maria Olsen and fifth year forward Julia Grosso each had one shot on goal to lead the team at half.

Less busy was Kentucky’s freshman goalkeeper Laura Nielsen, who played in her first home game in Lexington Sunday afternoon. Marshall’s two first half shots were both on goal, shot by the Thundering Herd’s Kat Gonzalez and Kayla Denney, respectively.

Nielsen finished with five saves in 81 minutes played, bringing her 2021 total to 11 in two games as a Wildcat.

Four shots by Kentucky in the first five minutes of the second half set the tone for the outstanding second half Kentucky was about to have, three of which were by Olsen. The offensive-minded Wildcats left the Thundering Herd reeling as the first few minutes were spent almost entirely on Marshall’s side of the pitch.

The next 16 minutes was the best soccer Rhodes, or any UK Women’s Soccer player has ever played:

After a 51st minute shot by Olsen (her fourth of the half) that was the closest shot on goal to that point, Kentucky turned the pressure on and within the next two minutes, Jordyn Rhodes slid the ball past McVicker off the assist from Miranda Jimenez and Kentucky had the one-nil lead.

Rhodes had yet another opportunity to score in the 57th minute, breaking free of the defender in green, but couldn’t square her shot up when it came time to make the play.

She didn’t have to wait long for goal number two, however, as in the 59th minute Rhodes scored her second goal of the game off the foot of Olsen and in the blink of an eye, it was a two-shot Kentucky lead.

Less than 10 minutes later, Rhodes achieved a feat not many UK Women’s Soccer players ever have — her third goal, giving her a hat trick and Kentucky a three point lead.

Marshall’s hopes for leaving Lexington with a victory were all but wiped away and Rhodes was subbed for the afternoon in ‘71 to a standing ovation from the fans in attendance.

Rhodes’ three goals came on eight attempts, four of which were on goal. Overall, Kentucky finished with 25 total shots and 12 SOG, which were shot by seven different Wildcats.

Kentucky will be back at The Bell Thursday, Aug. 26 against Louisiana Lafayette live on SEC Network+ and ESPN+. Kick-off is slated for 7 p.m. ET.