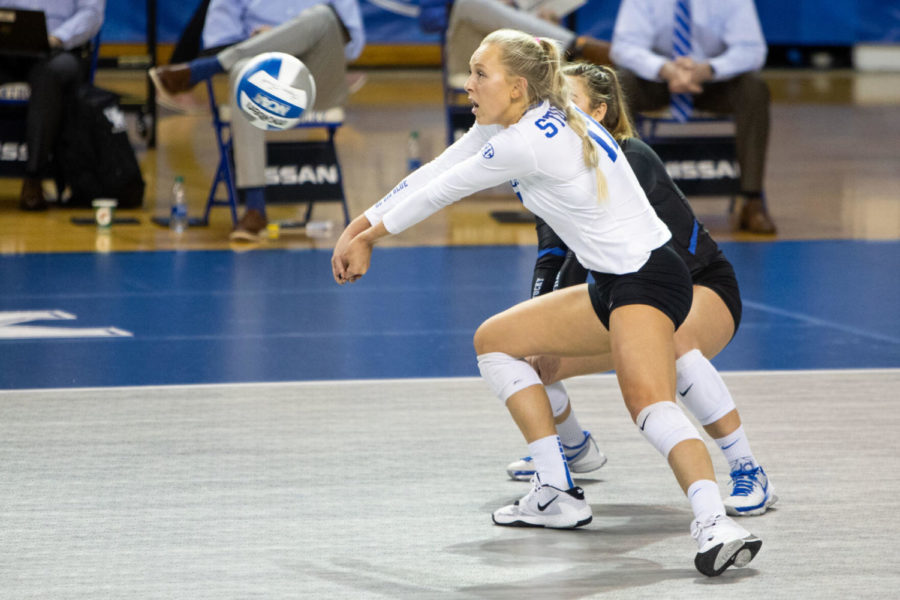 The reigning national champions tipped their season off on the right foot in Dayton, OH against Texas State Friday morning, defeating the Bobcats 3-0 (25-18, 25-7, 25-15) in game one of the Dayton Invitational to improve to 1-0 on the young season.

The ‘Cats dominated the stat sheet, more than doubling the total kills recorded by Texas State, 44-21. Alli Stumler cemented herself as the leader of the team, recording 14 kills on 32 attempts (.406) with two blocks.

Speaking of blocks, junior middle blocker Azhani Tealer led Kentucky with six of their 15 blocks, setting the tone for yet another stellar defensive season. True freshman setter Emma Grome had an impressive collegiate debut as well, recording 32 assists and a kill.

Ranked No. 3 in the AVCA preseason poll, the Wildcats headed into game one after losing three of their biggest stars in Madison Lilley (graduated), Gabby Curry (graduated) and Avery Skinner (transferred to Baylor) along with freshman middle blocker and No. 8 recruit in the country Jordyn Williams, who is out for the season with a torn Achilles.

Texas State, who was selected to win the Sun Belt Division for 2021 finished last season with an impressive 31-9 (15-1 conference) record. Friday’s game was the second time in head coach Craig Skinner’s 17-year tenure at Kentucky that the Wildcats battled the Bobcats, which came on Sept. 8, 2018 in a 3-1 Kentucky victory.

14 first set kills for Kentucky allowed the Wildcats to blow past Texas State 25-18. Outside hitters Stumler and Madi Skinner had four kills a piece; they each recorded a block as well.

After the Bobcats recorded the first point of set two, Kentucky went on a tear, scoring the next 13 points in a row, all but deciding the set before it was over. Tealer did what she does best in set two, recording three blocks while sophomore opposite hitter Reagan Rutherford’s .545 hit percentage (7-11) helped Kentucky blow out the Bobcats en route to gaining a 2-0 lead.

A third dominating set in a row proved too much for Texas State to overcome and Kentucky swept the Bobcats in impressive fashion, proving that their eyes are set for another national championship at the end of the season.

Didn’t get enough Kentucky volleyball Friday morning? They’re back in action tonight against Dayton at 7 p.m. ET and will be available to watch on ESPN+.