Who’s expected to step up in UK’s pass rush and secondary? 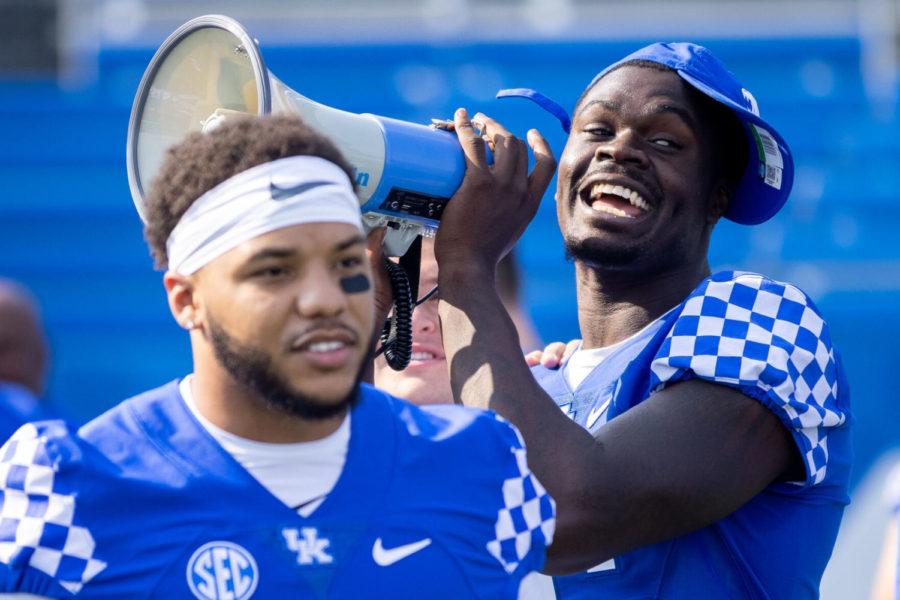 The two biggest question marks defensively for Kentucky this season are their pass rush and their skill in the secondary.

At the end of last season, Kentucky’s pass rush was ranked 113th out of 126 FBS programs. “Everybody is taking that extra step to be the best pass rusher on the team,” senior outside linebacker Jordan Wright said.

“We know we can rush the passer,” Wright said. “Just seeing everybody going out there and giving their all in the pass rush, you see guys working on moves that they’ve never used, but you need to do that to get comfortable.”

The defensive linemen and edge rushers have put an emphasis on getting extra work in before and after practice, honing their skills on the bags and turnover circuit. They work on their double swipe and cross-chop to get that game-ready feeling.

“When it comes to game time and practice, you can already have that feeling.”

Last season, Louisville-native and budding pass rusher J.J. Weaver tore his ACL in November against Florida. Weaver totaled 33 tackles, 6.5 tackles for loss and one-half sack during his freshman season; his one start coming in the game where he suffered his injury.

His injury was just another blow to the abysmal season Kentucky had on the edge and his teammates are looking forward to seeing him produce when he’s cleared to step back onto the field.

“J.J.’s looking good day-by-day,” Wright said. He’s not letting Weaver push himself too hard because the defense needs him this season. “He’s looking good and attacking every day hard.”

The main thing that Wright believes will make Kentucky’s pass rush more successful in 2021 starts with leadership, which hasn’t come from one person in particular, but the entire defense as a whole has stepped up in his eyes.

“The whole team has stood out to me,” Wright said. “Just seeing how we attack the day … everybody is locked in. I’m ready to see what this team can do because we’ve got big things ahead of us.”

Senior inside linebacker DeAndre Square said during week one of fall camp that he’s taken it upon himself to show his leadership skills and be someone other players can look up to and take after.

“You set an example for all the freshman, even all the guys that have already been through the program,” Square said. “You never get too old to stop proving yourself and can never get comfortable.” Square said that Kentucky has guys that are trying to prove themselves and compete for a spot in every position on defense, so he has to go hard every chance he gets.

“It doesn’t matter if you’ve been the starter for three years, or if you’re up and coming,” he said. “You still have to prove yourself day in and day out.”

Cedric Dort, a senior defensive back said that the defense will be just fine as long as they compete and bring energy to every practice and game. “Our job is to bring the defense up to that type of energy that Coach (Brad) White wants,” Dort said. “When you play with high energy and play together, nobody can defeat you. That’s our main mentality every time we step out on the field.”

Dort said that himself, Square, McCall and Wright have all taken steps to prove their leadership over fall camp, and it’s paying off

Speaking of defensive backs, the secondary has the same problem; not because there wasn’t talent in those positions, it’s because there was too much talent. Kentucky lost Kelvin Joseph (Dallas Cowboys) and Brandin Echols (New York Jets) to the NFL.

Dort and Yusuf Corker, both senior defensive backs, are expected to step in and fill the holes left by the current NFL rookies. Fifth year safety Davonte Robinson has returned from injury as well.

“I’m very motivated,” Dort said. “I’ve been here for a while and have seen great success come through the secondary so I’m very motivated … the young guys look up to you and we can see that. If you’re down, they’ll be down so when you bring that high energy as a leader, they’ll naturally follow you.”