Across the (By)Line: Chattanooga Mocs 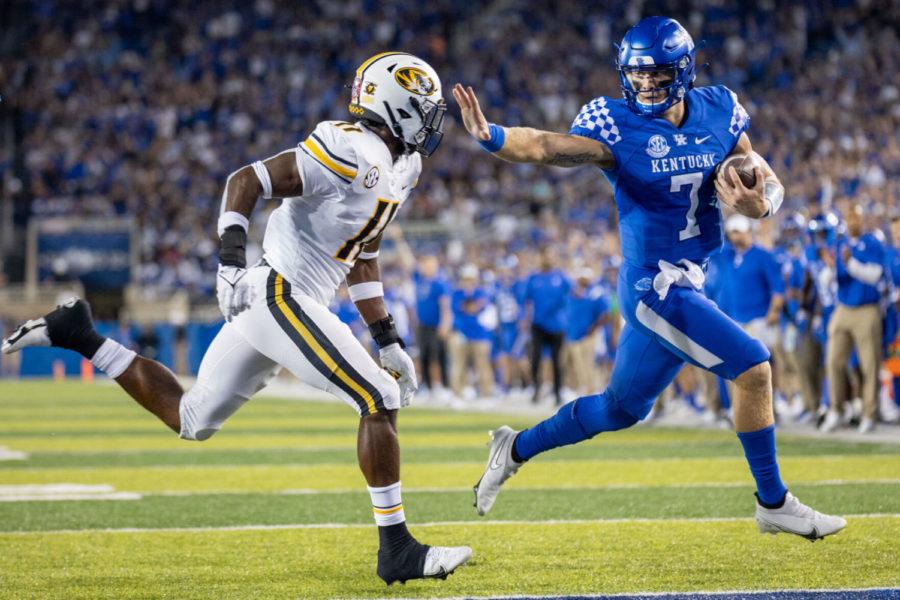 Kentucky quarterback Will Levis (7) stiff arms a defender to score a touchdown during UK’s game against Missouri on Saturday, Sept. 11, 2021, at Kroger Field in Lexington, Kentucky. UK won 35-28. Photo by Jack Weaver | Staff

For the unfamiliar, how would you describe Chattanooga’s football program?

Peyton: I would say UTC’s football program consists of young guys who haven’t played much football over the past year but can still put up numbers. UTC had only one game last fall and only played four this past spring. They began the spring 3-0 and jumped to the No. 9 ranking (FCS obviously.) They began this fall ranked No. 18 but fell short to Austin Peay in the first game of the season.

What do you expect UTC’s game plan to be this Saturday?

Peyton: I honestly couldn’t tell you what the game plan is for Saturday. UTC has one game like this every year. They’ll play Tennessee, Alabama, Florida St. etc., but they have yet to come out on top. I believe, other than receiving a handsome payday, UTC’s overall goal is to go out there and compete with an SEC football team, gain experience and come back to Chattanooga better than when they left.

Ailym Ford rushed for 114 yards his last time out, how important is he to the UTC offense?

Peyton: Ford is a staple in the Mocs offense and has been since his freshman year. As a freshman, he was 10 yards shy of setting the single season record for rushing yards. That was 2019. He played in the lone fall game last year but didn’t see any action this spring. Though he’s not been on a field much, I think it’s safe to assume he’s bigger, faster and stronger than he was two years ago. I think he’ll be touching the ball a lot Saturday.

Will the Mocs defense have any answer for Chris Rodriguez or the UK receivers?

Peyton: That question will just have to answer itself come Saturday. But if it’s any consolation, I think the SEC could have trouble with Rodriguez this year.

UTC has played two different quarterbacks in the team’s first two games. Who will be under center for the Mocs on Saturday?

Peyton: Since coming to UTC a few years back, Rusty Wright has shown that he likes to run a two-quarterback system. It was all Drayton Arnold against Austin Peay; all Cole Copeland last week. For this game specifically, I think you can expect to see a mix of the two.

Who are some players that Kentucky fans should watch out for?