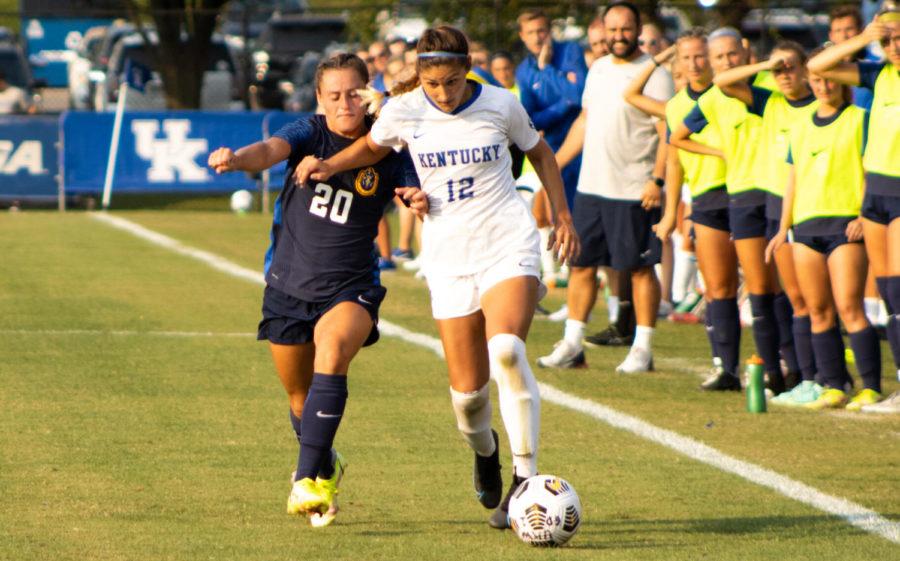 Though Kentucky put up nearly double the shot attempts and over double the shots on target, the Aggies capitalized on their opportunities. Freshman goalie Laura Nielson played her first match of the season without a save for the Wildcats, as all three Aggie shots on goal found the back of the net. Texas A&M’s Kenna Caldwell finished the game having saved all seven of the ‘Cats shots on target.

Kentucky came into their conference schedule following a 3-2 overtime victory over the Murray State Racers. It took the ‘Cats 37 seconds to get their first overtime victory of the season with Hannah Richardson finding the corner of the net to extend Kentucky’s winning streak to three matches.

Neither team was able to get the upper hand for the first 15 minutes, with both sides attempting two shots. There were seven fouls in the first 15’, three by Kentucky and four by Texas A&M, with the Aggies Mia Pante picking up a yellow card.

A&M would get on the board first in the 17th minute when Maile Hayes found the back of the net off an assist by Pante to put the Aggies up 1-0.

The Aggies would then add to their lead in the 27th minute when a UK foul awarded A&M a penalty kick, which was converted by Taylor Pounds.

Kentucky’s dreadful first half would continue as the Aggies added a third  goal in the 41st minute, when Mikhiya McDonald lofted a shot over Nielsen, thanks to an assist by Jai Smith.

The stat-sheet favored the Wildcats after the first 45 minutes, but the score said otherwise.

Kentucky would attempt to get a goal back early in the second half, putting up two shots on goal within the first ten minutes, but neither could find the net.

The Wildcats defense would settle in, allowing just three total shots for Texas A&M in the second half, but the offense was unable to do the same.

Despite the strong start to the second half, Kentucky was unable to beat Caldwell and finished the match scoreless for their first shutout loss of the season.

Kentucky is back in action this Sunday, Sept. 19 for  a non-conference matchup, against the in-state Bellarmine Knights. The match will kickoff at 7.00 p.m. E.T and will air on the SEC Network.