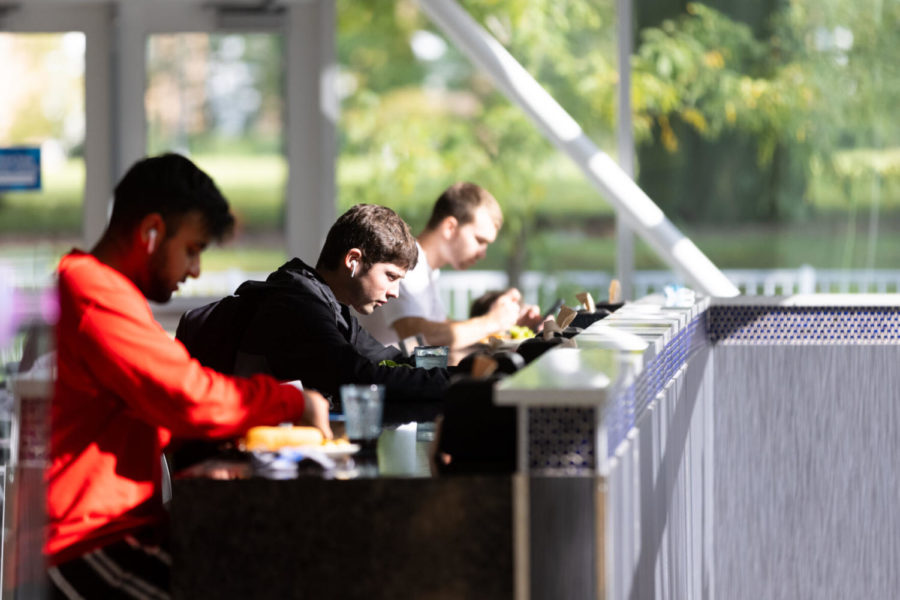 Students eat at The 90 dining hall on Wednesday, Sept. 15, 2021, at the University of Kentucky in Lexington, Kentucky. Photo by Michael Clubb | Staff

The Fresh Food Company at The 90 has been dedicated to local, sustainable operations since its construction in 2015, and it has recently implemented programs to further this goal.

The University of Kentucky works with the distribution company Aramark to source food and uniforms for the over 88,000-square-foot dining hall located on south campus.

Lee Hendrickson, director of operations at Aramark, said sustainability was a talking point between Aramark and UK during the 11 months of the Fresh Food Company’s construction.

“There was a great push for sustainability that originated in the actual contract,” Hendrickson said. “It was something that UK Dining Services was already working on prior to [Aramark] coming in, so that expectation was that we continue growing that program, and we’ve been able to do that really well at The 90 through local purchasing.”

The 90’s partnerships with local farmers

UK launched two local food initiatives in 2018, partnering with local farms to increase the farms’ business and ensure food quality. One of these partnerships is the Marksbury Farm Whole Animal Project.

The project entails Marksbury Farm and other local farmers categorizing their different cuts of meat based on how they will be prepared. This ensures that as much of the animal is used and gets the farms the most competitive price for their product.

“Making sure the whole animal moves [through the distribution process]…keeps us from having to stop things because some other part of the animal is piling up somewhere,” said Cliff Swaim, who handles the farm’s wholesale business. “It seems very logical, but it was extremely difficult to pull together. It’s been working quite well for the last four years.”

In addition to the advantages this program brings to UK Dining, Swaim said this program has a “major impact on local farmers.”

UK purchases five hogs and two heads of cattle per week, which Swaim described as a “decent bit of revenue” for farmers.

“To be able to write those checks to those farmers that are right here … it keeps all the money close to home, and I know that’s something that’s very important to us,” Swaim said. “It’s important to these farm families who are trying to provide a way for the next generation.”

“Right now, we’ve come across quite a few really good [restaurants], and … we’re always looking to change things up a little bit to keep them fresh,” Hendrickson said. “I don’t want the layout that’s here to be the same five years from now.”

“For me, I like Smashing Tomato the most,” said Isaac Stevens, a freshman majoring in biosystems engineering. “I’ve been eating Smashing Tomato since I was really young, so I like that it’s here.”

“The quesadillas at [Nathan’s Taqueria] on Friday are the best part,” said freshman chemical engineering major Luke Ransom. “I wait for Friday every day.”

In 2019, as part of a collaboration between UK Sustainability, UK Dining and the College of Agriculture, UK began adding food waste from The Fresh Food Company to its composting program. UK Recycling Coordinator Joanna Ashford said UK Sustainability had been working on a food waste collection program for 12 years, which they could finally develop once “all of the right partners were at the table.”

“It really was a serendipitous situation where all of the pieces fell into the right place,” said UK Recycling Coordinator Joanna Ashford. “Composting has been happening; it’s just the incorporation of the food waste that was new.”

The 90’s efforts to divert food waste include pulping leftover food from customers’ plates into a compostable material.

“You put your plate on a conveyor belt … and then the staff in the back of the house cleans off those plates. Anything left on the plate — that’s a whole piece of pizza, that’s a chicken bone, that’s napkins — all of that goes into the pulper,” Ashford said. “It essentially grinds the material and extracts about 50 percent of the water. What’s left over looks a little bit like sliced cabbage. It makes a really nice uniform material to be composted.”

This material is then sent to the C. Oran Little Research Center, a UK-affiliated farm in Woodford County, to be combined with farm waste and composted. Ashford said the program has received “nothing but positive feedback,” despite some concerns about odors and pests.

“I can understand that if somebody said they were gonna bring food waste containers into my office, I’d be a little leery, but all of the people at the table have been in this industry long enough to know…what can we do to prevent those [odor and pest] issues,” Ashford said.

The composting program had to be altered in the 2020-2021 school year, since dining hall seating was reduced. The program increased its focus on reducing kitchen production waste as opposed to waste left by dining hall customers. UK Sustainability also began collecting coffee grounds from Starbucks locations at both the Gatton Student Center and the William T. Young Library.

“I’m just happy that we were able to weather the pandemic,” Ashford said. “I would love to see our program grow and expand; I think there’s lots of other opportunities.”

Both Marksbury Farms and UK Sustainability hope that the programs they have implemented in UK Dining will eventually spread. Swaim hopes to see local farming initiatives like UK’s spread across the country, especially in institutions that are already partnered with Aramark. He said the university’s program has been a “litmus test” for other colleges to implement in the future.

“You’re creating lots of opportunity all over the country for farmers that want to do grass-fed and local [farming] and want to see their animals stay close to home,” Swaim said.

Ashford also hopes that UK’s sustainability model will be duplicated in other locations.

“I really think it sets UK as a leader in Kentucky for some of the composting efforts,” Ashford said. “I’m hopeful that us doing it proves to other larger corporations and cities that it’s a possibility for them to do, too.”