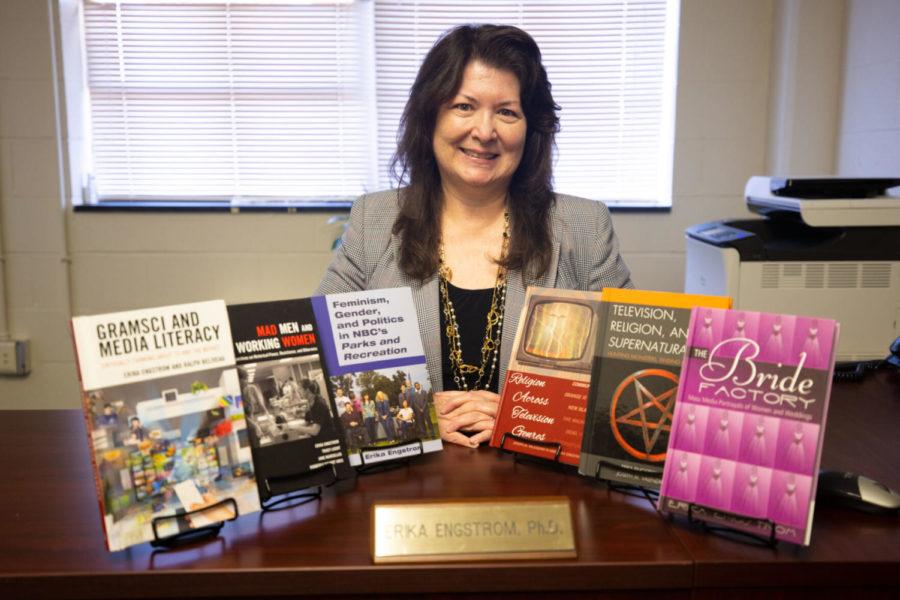 Director of the School of Journalism and Media, Dr. Erika Engstrom, poses for a portrait on Tuesday, Sept. 7, 2021, at Blazer Dining in Lexington, Kentucky. Photo by Michael Clubb | Staff

This is Humans of UK, inspired by the Humans of New York Instagram series by photographer and author Brandon Stanton. This series dives into the individuals of UK as well as their stories, strifes and passions.

Professor Erika Engstrom’s office is coming together. Engstrom, the UK School of Journalism and Media director, has recently made the new space her own.

Books line her shelves, along with a few plants, including plenty of golden pothos to decorate the space.

This academic year is Engstrom’s second at UK. Due to COVID-19 moving most instruction online during the past year, this is her first year officially off of Zoom and the first in her own UK office.

Born in Tokyo, Japan, Engstrom has also lived in several parts of the United States, primarily to follow her love for learning.

Students who have taken a class from Engstrom know that the Gators are not something to mess around about, and they should only mention Tim Tebow if they also admire his dignifying reign of the UF football team.

Engstrom was in the radio industry for three years after UCF, during her time at UF and in Las Vegas. She was a reporter, anchor, producer, DJ and a radio station manager. “Radio teaches you how to speak and keep going,” she said, adding that it’s an important starting point for anyone looking to work in television.

She originally wanted to become a news consultant, putting the years of experience she had to good use. Although Engstrom stayed in media, it took a slightly different turn – she went back to the classroom.

After receiving her doctorate, she taught at the University of Nevada, Las Vegas, beginning in 1991. She taught courses similar to those she teaches at UK, classes about the intersection of gender roles and media. She stayed in Nevada until she got a job offer from UK a year ago.

Engstrom said her life has centered around academics.

“Do people have hobbies like mountain climbing, or saving the whales, or saving pandas? I guess the only thing I’ve ever done is go to school. School, school, school,” Engstrom said.“I don’t have anything interesting. I don’t bake cupcakes or sell them online or whatever.”

Although Engstrom might not think she has hobbies or a prodigious baking career, her interests are diverse. She is a radio DJ, pianist, lover of sushi, media scholar, “Supernatural” fan, reporter, producer, camera operator, “Jeopardy” runner-up, learner, feminist for all and human.

Engstrom does, however, have an interest in educating students and readers on human rights.

“If you’re writing anything about what I am, it’s working towards a more egalitarian world where we can go to work and do a good job without being hassled,” she said.

“It’s about feminism. It’s about fear. It’s about expanding the notion of masculinity. It’s about commentary on the status of gender in the United States. It’s about the status of women, politicians and the world of politics, and how it’s mainly men,” Engstrom said about her book. “And we need more women, because women’s issues are human issues. And the more women we get in power, to make decisions, we can change things for the better.”

Her television taste falls in line with her studies.

Engstrom is not only a professor, she is an advocate. She has goals for her time here at UK and as a director, she intends to succeed in them.

“I would like to make the School of Journalism and Media the best place to work, teach and learn in the United States, how about that?” Engstrom said.