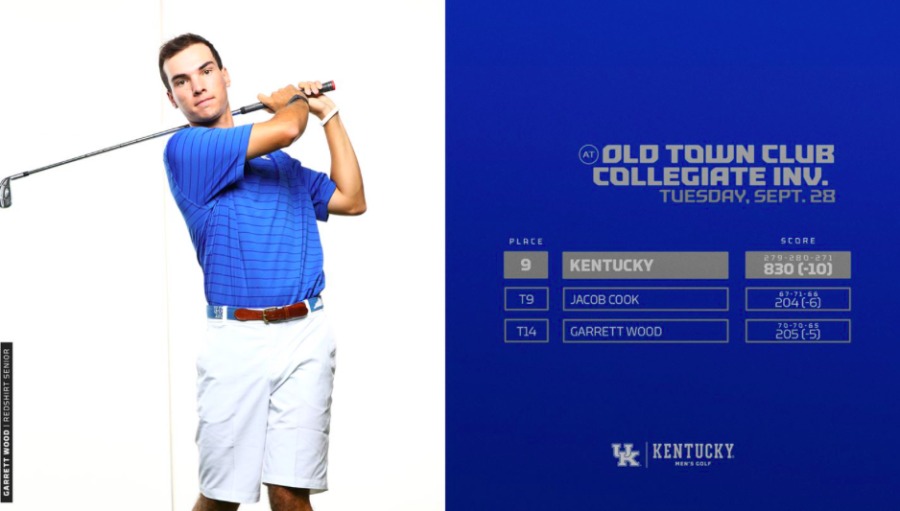 It was a career day for Kentucky men’s golf, finishing ninth out of 15 teams at the Old Town Club Collegiate Invitational in Winston-Salem, North Carolina after a tough showing on Monday.

The ‘Cats nine-under-par was the second-best score of the day, as big-time performances from Garrett Wood and Jacob Cook led UK in an impressive showing.

Wood and Cook had career-best scores, with Wood scoring 65, and Cook finishing at 66. UK’s final round of nine-under-par gives head coach Brain Craig his second-lowest score in his 21-year tenure. The team finished with an 830 combined team score—ranking third overall under Craig.

“Today was much more indicative of the ability of this team,” Craig said. “We had a rough day yesterday with our putting, but today was much improved. I am especially proud of Jacob Cook and Garrett Wood. Garrett’s 65 today was stellar, and Jacob’s 66 was fabulous. We will get back home and take a short rest and then get back to work preparing for the inaugural SEC Match Play Championship.”

The ‘Cats opened Tuesday’s round with 11 straight pars from Cook. Shortly after, back-to-back birdies from the fifth-year student at the third and fourth holes put the ‘Cats in a comfortable position.

Cook finished the round with a 31 on the front nine to score a final tally of 66. Wood ended with six birdies in his final round, giving him a top-20 finish for the 11th time in his career.

UK will be back to the tee at the SEC Match Play Championship on Oct. 10. The contest will be hosted at the Shoal Creek Club in Birmingham, Alabama with all 14 SEC teams set to compete at the three-day tournament.