Students can discover the night sky at UK’s observatory 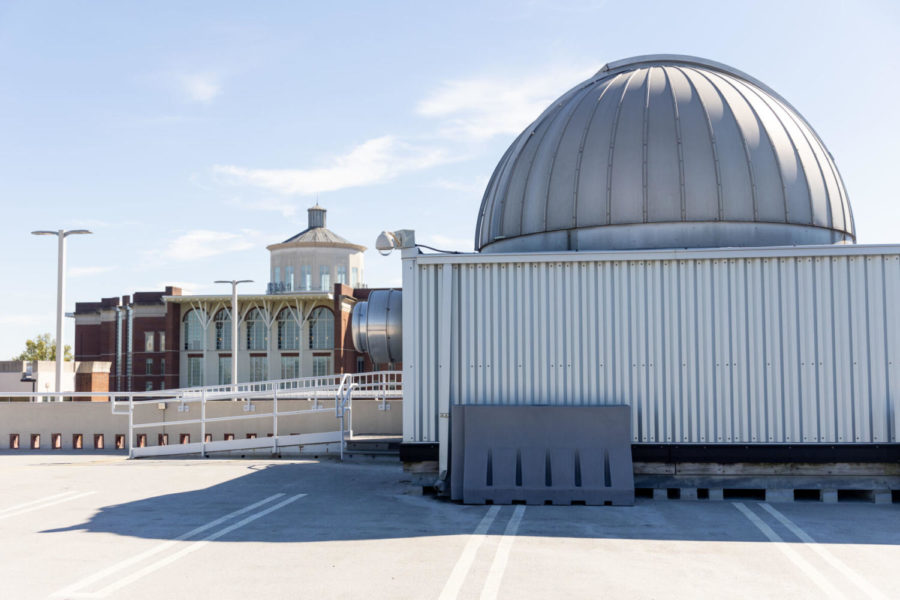 The MacAdam Student Observatory on Wednesday, Oct. 27, 2021, on the roof of Parking Garage Structure #2 in Lexington, Kentucky. Photo by Jack Weaver | Staff

For centuries, humans have observed the night sky, though the stars were far-off entities. Humanity now knows more than our ancestors could have imagined, in part thanks to observatories and their users.

The MacAdam Student Observatory, located on Hilltop Avenue on the roof of Parking Garage Structure #2, has been a feature of UK since 2007. The observatory is primarily used by students enrolled in astronomy classes at UK. However, on the second Thursday of every month, the observatory becomes publicly available after a public access astronomy lecture in a series called the Kentucky Sky Talks.

“They’ve been going on for at least a decade,” said Thomas Troland, a UK professor of physics and astronomy. “Ever since we’ve had the observatory on the parking structure, we decided to include some outreach efforts in addition to just having the telescope.”

The talks cover a wide range of astronomical subjects, like black holes and how people can buy their own telescope. The talks are presented by professionals associated with the University of Kentucky astronomy department, including faculty members, graduate students and the observatory director. People of any age or experience level can attend the talks, which are normally hosted in the Jacobs Science Building.

“We try to make them understandable to at least middle school students,” Troland said. “We sometimes have had younger students there too.”

The talks usually begin at 7 p.m. and last for about 45 minutes before the observatory becomes open for public usage, whether visitors attend the talk or not. There are not always optimal weather conditions for using the telescope, but people are always free to look. Some just want to see the telescope and other available equipment.

Attendance for the talks can vary from 25 to over 150 people. Troland said that only a small percent of attendees are UK students. This may in part be due to students’ schedules.

During the first year of the COVID-19 pandemic, the lectures went on hiatus. In 2021, though, they resumed at full capacity, with attendees observing UK’s COVID regulations. Currently, the department is looking into hosting Zoom sessions for the talks as well. The Zoom sessions would then be recorded and archived on their website for public use as well, where they can be watched whenever.

The talk for November is set to be presented by graduate student Bi Da. The subject of the talk will be posted to the observatory website in the week before the next lecture, which will be on Thursday, Nov. 11.