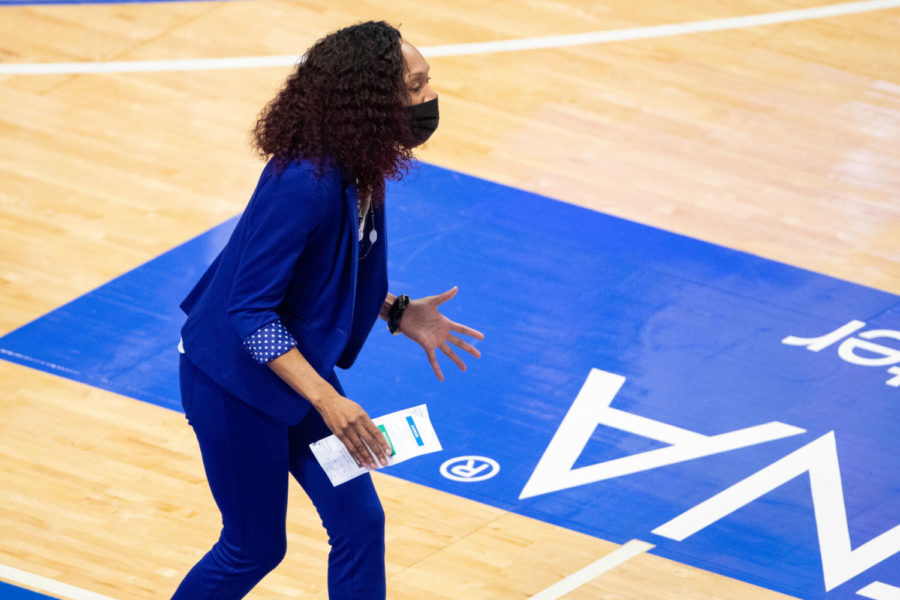 It’s that time of year again.

Kentucky’s annual media day was Kyra Elzy’s first as head coach of the women’s basketball team. Smiling from ear to ear, Elzy opened Monday’s event with optimism as she addressed the media

“Commit to it.” — the theme of the 2021-22 Kentucky team. After taking over the reins for longtime coach Matthew Mitchell, Elzy emphasized “setting the tone and culture of how I wanted things was really important.”

“We’re asking them to commit to it on the court,” Elzy said. “Whether it’s how we play defense, buying into your role, how we wanna play uptempo, committing to the weightroom, committing to nutrition, committing to the community…It’s all encompassing in what we are trying to do to move this program forward.”

Elzy discussed how important having a normal summer of team bonding was in this team’s development in comparison to last season.

“You always knew how important a summer was, but last year when we didn’t have it, we really just came in on the basketball court and started practicing. We didn’t have time to gel. You saw during points of the season when he hit adversity…it really showed itself,” Elzy said.

This summer, Elzy led her team in “one of the hardest things we have ever done,” in a surprise trip to Fort Campbell, Kentucky to focus on team bonding and pushing the team to its limits.

“It really showed the staff and the players that we were in the trenches together, and that it takes everyone in order to be successful,” Elzy said.

When asked what she learned about the team, Elzy expressed how her group has banded together:

“We are tough,we are resilient and we aren’t gonna leave anybody behind. That was an activity that forced us to be our best physically and be our best mentally,” Elzy said.

As for on the court, Elzy expects this team to play fast.

“I want to play faster than we played last year. We play positionless basketball, we play fast. We talked all summer that our defensive intensity must be there,” Elzy said. “No matter where we go, our heart and intensity on defense and rebounding should travel with us at all times…playing faster defensively, more disruptive and being able to run will really help us play the tempo that we want to play.”

While expectations are high for the Senior guard, Elzy says Howard “can’t do it alone.”

Elzy is calling on her team to fulfill their roles to support Howard’s efforts.

“Last year, we watched Rhyne too much. We can’t get caught watching, we have to be a part of the action. We have to get other people involved in the offense,” Elzy said.

Kyra Elzy has high expectations for this year’s squad, as the Cats seek to win the SEC for the first time since 2012.

Upcoming for the women’s team will be an exhibition game against Lee University on Nov. 4, which will not be televised.

Shortly after, on Nov. 9, the team will tip-off their season at Memorial Coliseum against Presbyterian at 7 p.m. E.T on SEC Network+.