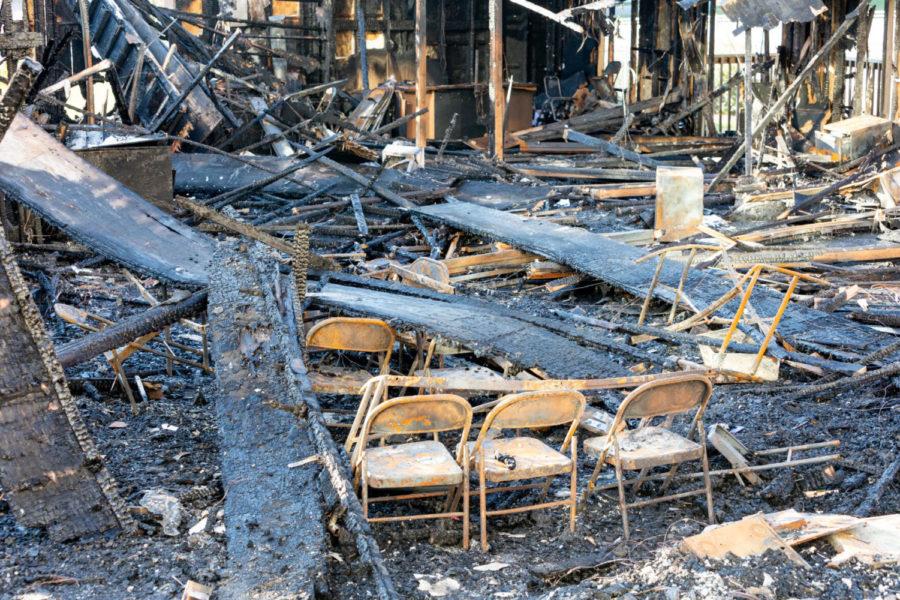 Charred debris lies on the floor of a construction trailer that caught fire around 4:30 a.m. on Sunday, Oct. 10, 2021, behind the UK College of Pharmacy Building in Lexington, Kentucky. Photo by Jack Weaver | Staff

A trailer located on the University of Kentucky’s campus sustained significant structural damage from a fire on Sunday morning.

According to Lexington Fire Department Battalion Chief Jordan Saas, the fire department responded to the 100 block of Leader Avenue around 4:30 Sunday morning after receiving reports of a structure fire. Responding firefighters found an outdoor trailer ablaze near the UK Chandler Hospital.

“The incident was immediately upgraded to a working structure fire,” Saas said. “Significant structural collapse had occurred in the center of the building.”

UK spokesperson Jay Blanton said the trailer is owned by a construction contractor doing work on the nearby Healthy Kentucky Research Building. Blanton said UK does not have any classrooms in the trailer; there are just meeting spaces, offices and break rooms for the contractor in the structure.

Saas said the fire is now out, and no injuries have been reported.

A fire investigator reported to the scene, and the cause of the incident is now under investigation.