Across the (By)Line: Georgia Bulldogs 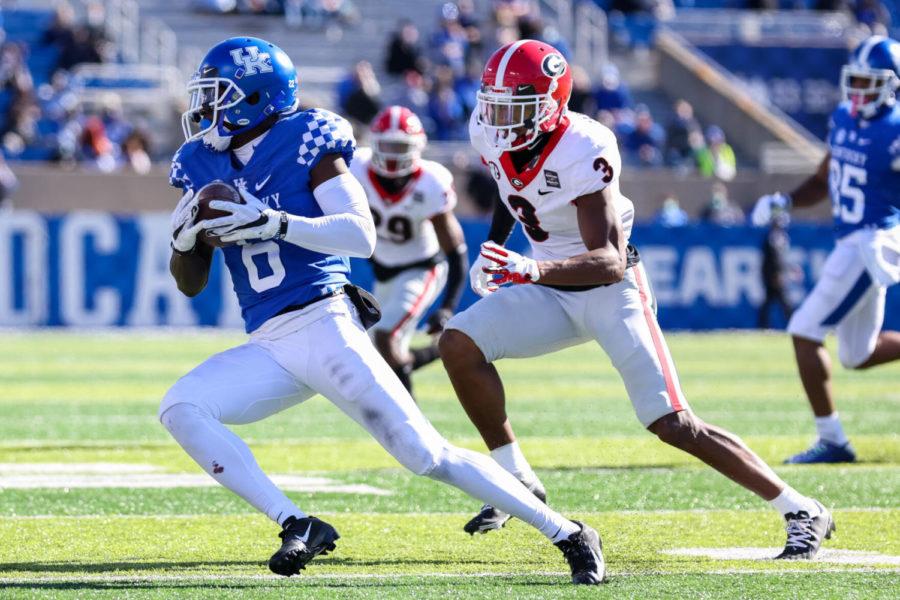 Kentucky Wildcats wide receiver Josh Ali (6) runs the ball up the field during the University of Kentucky vs. University of Georgia football game on Saturday, Oct. 31, 2020, at Kroger Field in Lexington, Kentucky. UK lost 14-3. Photo by Michael Clubb | Staff

The “Across the (By)Line” series will give Kentucky football fans an in-depth look at their opponent for this week — from the mind of the opposing school’s sports editor.

This week: Jack Duffey, The Red & Black, University of Georgia.

Who should Kentucky expect to see under center for Georgia on Saturday?

Duffey: That’s a tough question. Because you know, the right answer should be JT Daniels, but because of his grade-one lat strain and the nature of where he’s at, it’s more likely that Stetson Bennett is going to be the starter on Saturday. But depending on if  JT feels like he can go, and the medical team says he’s cleared, then it will be JT, but otherwise I would expect Stetson.

What is Georgia’s biggest weakness?

Duffey: From a fan’s perspective, at times, it does look like they’re unbeatable. You try to look for holes on the roster, and you can’t really find any, especially on defense. I mean, the defense could end up being a historic college football defense. But I think what could end up being a derailment for the Bulldogs is the fact that so many players, especially on offense, are injured. Like you see JT is injured. You have players like Dominic Blaylock, Aaron Smith, wide receivers. The past game against Auburn, Christopher Smith went out with an injury. So you kind of look at the durability of the Bulldogs’ roster and you wonder if they can get through the rest of this season unscathed.

Does this game mean as much to Georgia as it does Kentucky?

Duffey: I would say yes, because Kirby Smart has preached all season that he and his team are treating every game like it’s a championship game. That’s the mentality that they’ve had this season. And that’s the mentality that’s been successful so far this season. They are not overlooking any opponents, and especially not Kentucky, being undefeated, coming into Georgia as a top 11 team. They are certainly looking out for the Wildcats. And I would say this is probably one of the most important games for them this season because it almost determines the fate of the SEC East. Because if Georgia loses, it becomes very difficult for them to win the SEC East. They need Kentucky to lose twice. So yes, I would say they’re looking at it as it’s very important.

What do you think the difference maker is going to be this Saturday?

Duffey: I think the difference maker in this game will be whether or not the Georgia front seven can stop Chris Rodriguez and stop the run. Chris Rodriguez is a guy that chips away and makes defenses tired by the end of the game. Georgia has shown that they have great rotational depth among the defensive line and linebackers. But against Auburn, they let up their first rushing touchdown of the season against Tank Bigsby. You know, if Kentucky can find success in the run game, I think it opens up a lot of the playbook for Will Levis and Wan’Dale Robinson and other wide receivers to air it out, because it causes the Georgia defense to be honest and keep Rodriguez honest, in the running game. So I think the biggest aspect of this game is whether or not the Georgia defense can slow down a high powered running back. Because if Kentucky is one dimensional, then I don’t know that they will be very successful on offense.

Do you think Kentucky has a chance? And what is your score prediction?

Duffey: There is not a single team that is invincible and unbeatable. That’s just the nature of the sport. I do think Kentucky has to play a perfect game. They have to make sure that they minimize mistakes, not turning the ball over, making sure they score when they get in the red zone or in field goal range. And then being able to slow down the Georgia offense to, you know, maybe only scoring 20-some points, because I think the Georgia offense will find points against Kentucky. But if they slowed down just enough to where they could hang with them for the whole game, then they might be able to find success. I’m gonna say Georgia wins this game. I think the defense has proven time and time out that they travel and it’s that it’s at home. I think the crowd is gonna play a big role in the game. So I’m gonna say Georgia 35, Kentucky 17.