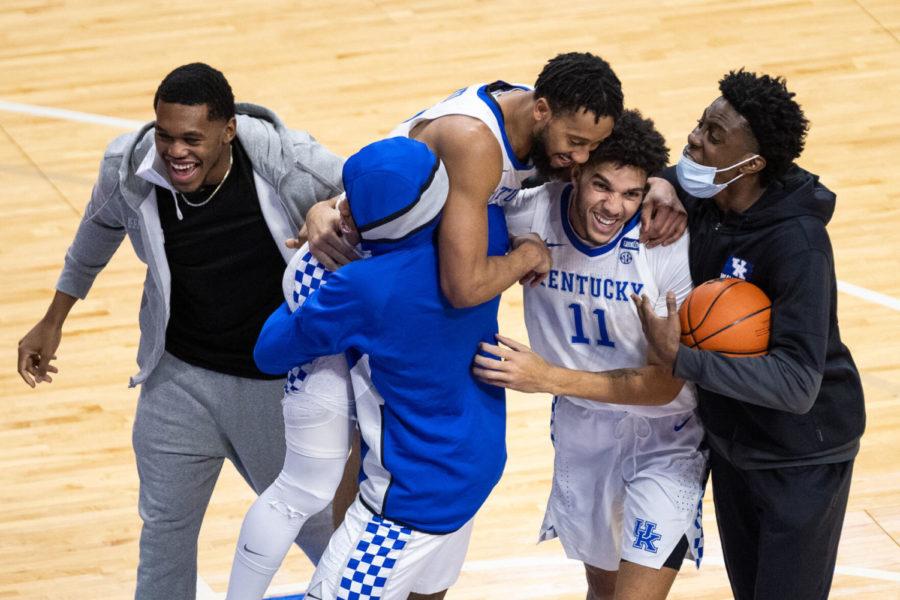 Kentucky Wildcats guard Davion Mintz (10) is lifted up after winning the game with a last minute three pointer during the University of Kentucky vs. Vanderbilt men's basketball game on Tuesday, Jan. 5, 2021, at Rupp Arena in Lexington, Kentucky. Kentucky won 77-74. Photo by Michael Clubb | Staff

Terrence Clarke, born and raised in Boston, was killed in a car accident on April 22, 2021, in Los Angeles, California. He was 19 years old. It has been almost six months since the former Wildcat was tragically killed, but his presence and legacy still live on not only for UK Basketball but the Lexington community as well.

Immediate reaction came from the basketball world, as many professional players — including the likes of LeBron James, Jayson Tatum and Donovan Mitchell — proclaimed their shock and sorrow. A candlelight vigil was held outside the Wildcat Coal Lodge for Clarke a day after this death, an emotional moment for fans, students and his teammates.

Photos of him playing, cheering on his teammates and getting ready during pregame introductions were hung up outside the Lodge.

There was a common denominator within all the pictures: he was smiling ear to ear.

Clarke was one of the best high school prospects people have seen. He got to the rim with ease and could explode off the floor to finish not just through contact, but over it as well. He ended up reclassifying to the class of 2020, bypassing his senior year where he ranked as the No. 8 high school prospect in the country, according to 247Sports.

In addition to his basketball skills, the thing that stuck out most in Clarke’s film was the emotion with which he played. He wasn’t afraid to talk trash, yell and get under the opponent’s skin. He looked like he was having the time of his life out on the court. Whenever someone saw Clarke play, they were bound for a show.

Clarke committed to Kentucky on Sep. 14, 2019. He was the fourth player in the Class of 2020 to commit to the Wildcats, joining Brandon Boston Jr., Cam’Ron Fletcher and Lance Ware. Big Blue Nation was ecstatic, knowing they were getting an elite talent.

Coming into the season, expectations were high for the team, as it was loaded with talent. Things took a sharp turn as they started the year 1-6, with Clarke having to sit most of the year with a nagging foot injury.

Before the season started, the basketball world knew Clarke would be a typical “one-and-done” at UK. He was a first-round talent whose skills translated to the modern NBA, but sitting out most of the year saw his stock start to drop while sitting on the sidelines.

It would have been understandable for Clarke to withdraw himself from the team during the middle of the season to help get himself ready for the draft. After all, his dream was to play in the NBA. However, Clarke stayed on the sidelines, cheering on his teammates as they struggled to win games.

After a big play, he would be one of the first ones on the sideline screaming, letting his teammates know he was there for them — something that junior forward Keion Brooks Jr. felt last year.

“A lot of times Terrence was the light in my life. A lot of times where I might’ve been feeling down . . . Terrence came around the corner with that huge smile of his,” Brooks Jr. said.

Terrence could not make an impact with his play, so he made sure he made his impact with his smile and joy during rough times, which helped not just the team, but Big Blue Nation get through the team’s worst season since 1926-27.

After the season, Clarke announced he would be hiring an agent and entering his name into the 2020 NBA Draft. He moved to Los Angeles, working out daily with former teammate and fellow NBA draftee Brandon Boston Jr.

On April 21, 2021, both him and Boston Jr. announced they had signed with Klutch Sports, an agency whose clients include LeBron James, Ben Simmons and former Wildcat Tyrese Maxey.

His dream was finally coming true.

On the way home from a workout the next day, Clarke was involved in a fatal car accident. The basketball world mourned, sending prayers to his family.

Clarke was not just a regular basketball player — he was a celebrity. He had over 250,000 Instagram followers at the time of his death. Even the casual basketball fan knew who Terrence Clarke was. He was joyful, energetic and caring. He loved to live life and it showed, on and off the court, something that sixth-year senior guard Davion Mintz saw every day.

“I really want everyone to understand how happy a person like Terrence was,” Mintz said. “All of us on the team last year wondered, like, ‘Why is this dude always happy?’ It seems like everything is going wrong for him and he’s just still smiling. Little did we know he was just being happy for his last moments.”

“I think that is part of the reason why you see unbelievable magnitude of heartache today from everyone across our game and our country,” Calipari said. “Terrence had that spirit about him that rubbed off on every single person that was fortunate to cross paths with him. He was the person everyone wanted to be around and the guy everyone gravitated to.”

Clarke would have been 20 years old on Sept. 6. For his birthday, the current UK team, some of which never shared the same court as him, organized a public kickball game at Woodland Park in Lexington to celebrate. At the conclusion of the game, participants gathered in a circle to sing happy birthday to him.

The legacy of Terrence Clarke will live on with this 2021-22 team, as it will for future teams to come. His stamp on the basketball program and the Lexington community will carry on.