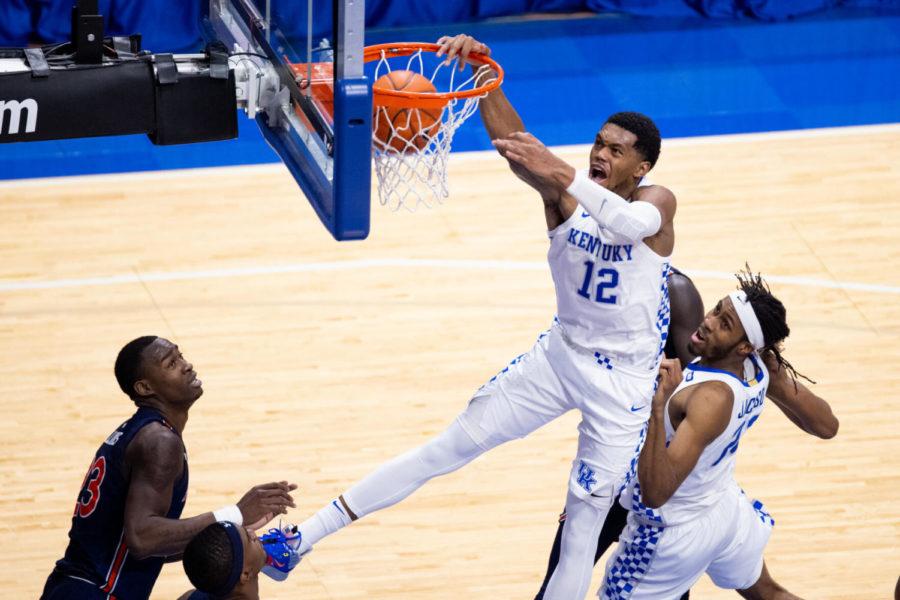 About: Toppin is entering his second year with the Wildcats after transferring from Rhode Island. He chose to transfer to Kentucky over Oregon and Iowa State. Toppin was a key bench player for UK last year; he will look to once again provide a spark off of the bench this season.

About: Fredrick is entering his first year as a Wildcat this season. He played three seasons with Iowa before transferring to Lexington. Fredrick attended Covington Catholic High School in Park Hills, Kentucky, where he was named the 2018 Kentucky Gatorade Player of the Year. He is a lights-out shooter who will provide sharpshooting off of the bench this season.

About: Wheeler is entering his first season at Kentucky following two seasons at Georgia. He holds UGA’s single-season assist record with 193, ranking him fifth nationally in assists. Wheeler also recorded the Bulldogs first triple-double in program history. The assist-minded guard will facilitate the basketball to those around him in bulk this season.

About: Washington, a five-star prospect, comes to Lexington as the No. 2 point guard in his class, according to ESPN. Washington is the latest recipient of the MaxPreps Arizona Player of the Year. His senior season in high school saw the guard shoot 48 percent from the field, including 41 percent from three-point range. Washington will likely begin the season as the starting point guard for the Wildcats.

About: A five-star prospect, Collins was awarded Texas Gatorade player of the year and consensus top-20 prospect in the Class of 2021. Collins also participated in the McDonald’s All-American, Jordan Brand Classic and the Allen Iverson Roundball Classic.

About: Mintz returns for sixth year of collegiate basketball, his second as a graduate student at UK, thanks to the extra year granted by the NCAA due to the COVID-19 pandemic. Mintz led the team in scoring and assists last season while also being one of three team captains.

About: Allen returns after finishing second on the team in three-point field goals last season, shooting at a 39.7 percent clip. Allen led the Wildcats in effective field-goal percentage at 54.5 percent. Allen is one of just three players from the Bluegrass on this year’s roster.

About: The elder statesman of the group, Brooks is back for year number three at Kentucky. The junior, who is coming off of a career-best sophomore season, will man the frontcourt with Oscar Tshiebwe. Brooks, who was just one of two Wildcats to earn multiple double-doubles last season, will play a key leadership role once again this season.

About: Canada was a highly-touted prospect from Kentucky, scoring 1,371 points in his career at George Rogers Clark High School, where he was a three-time All-District selection. He appeared in four games his freshman season.

About: Son of former UK assistant Kenny Payne, Zan Payne is entering his third season at Kentucky. Payne recorded 1,282 points during his time at Lexington Catholic High School, good for fourteenth best in school history. Payne’s 934 rebounds at Catholic are fourth best in school history. Payne did not play in his freshman season at UK due to a knee injury.

About: Hopkins joins the Wildcats after earning multiple awards his senior year of high school, including MaxPreps Illinois Player of the Year, Chicago Land Prep Hoops All-State First Team and Chicago League Player of the Year, being named to the Jordan Brand Classic roster as well as the Allen Iverson Roundball Classic.

About: Joining the team as a walk-on last season, Watkins made just one appearance for the Wildcats last season. Watkins is the stepson of former Memphis star Dejuan Wagner, who played under John Calipari.

About: Grady joins Kentucky after spending four years at Davidson. The graduate student is one of six players in the program’s history to eclipse 2,000 points. The guard will play a pivotal role in coach Calipari’s backcourt this season on both offense and defense.

Tshiebwe transferred to UK midseason as a sophomore and was ineligible to play the rest of the season due to NCAA transfer rules.

About: Tshiebwe, who transferred to Kentucky from West Virginia, will enter the season as the Wildcats biggest option, standing at six-foot-nine, 255 pounds. Tshiebwe’s freshman season at WVU saw the big man average 11.2 points and 9.3 rebounds per game.

Fun Fact: Tshiebwe has a 7’5 wingspan.

About: Ware will look to produce off of the bench for a second season, a role he filled well last year. Ware was able to do it all last season, recording 41 points, 63 rebounds, 11 blocks, eight assists and six steals.