No. 18 Kentucky loses 45-42 in shootout against Tennessee 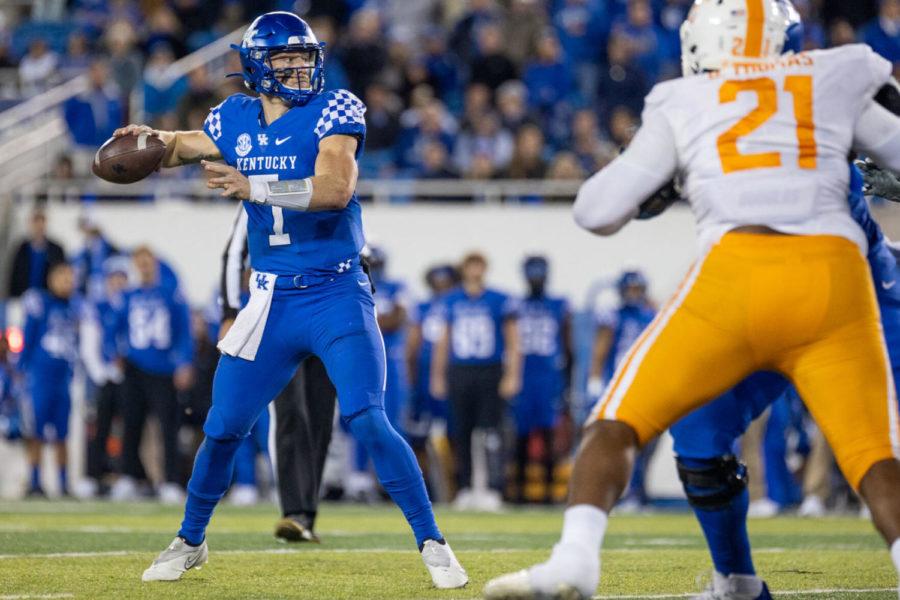 Kentucky quarterback Will Levis (7) throws a pass for a touchdown during the UK vs. Tennessee football game on Saturday, Nov. 6, 2021, at Kroger Field in Lexington, Kentucky. Tennessee won 45-42. Photo by Jack Weaver | Staff

No. 18 Kentucky lost their third straight game on Saturday, falling 45-42 to Tennessee in a rivalry turned shootout.

Despite running 99 plays on offense, totaling 612 yards and six touchdowns, the Cats could not stop the Volunteers from walking out of Kroger Field with the victory.

Both quarterbacks put on a show in Lexington. Will Levis and Hendon Hooker combined for 776 total yards of offense.

Levis finished with five touchdowns, three through the air and two on the feet. His 372 passing yards are the most for a Kentucky quarterback since Patrick Towles’ 390 yards against Mississippi State in 2014.

“Will threw some exceptional passes. Guys were making competitive catches and we had them off balance,” Stoops said.

Chris Rodriguez returned to form on Saturday, rushing for 109 yards on 22 carries. The junior running back rushed just 15 times combined in Kentucky’s last two matchups against Georgia and Mississippi State.

Despite having just 18 rushing yards in the first half, the Volunteers finished with 145 yards on the ground.

Wan’Dale Robinson hauled in 13 of Levis’ passes for 166 yards, both of which are career highs for the Nebraska transfer.

Vito Tisdale led the Cats in tackles, recording six tackles, five of which were solo. UT’s Aaron Beasley and Jeremy Banks each led the game with 14 tackles.

The Volunteers got off to a flying start, scoring on the first play of the game as Hooker found JaVonta Payton for a 75-yard touchdown.

Kentucky would answer, as Kavosiey Smoke capped off a 14-play, 75-yard drive with an eight-yard dash into the end zone.

Levis would carry the Cats down the field on Kentucky’s next drive, eventually scrambling in for an eight-yard score.

Following the lone punt of the game from UT, Kentucky would once again march down the field and take the lead for the first time, as Levis hit tight end Justin Rigg in the redzone.

Tennessee would be quick to respond, as the Vols needed just seven plays to score their third touchdown. Hooker would again beat the Cats, this time via an 18-yard pass to Jacob Warren.

With just over one minute left in the first half, Kentucky attempted to get downfield to swipe some points before halftime. UK would go for it on fourth down at the UT 39, but would come up empty.

UT would take over with just 16 seconds remaining, and Hooker would reel off three straight completions to Cedric Tillman, giving Volunteer kicker Cade McGrath a 43-yard field goal opportunity, which the kicker would connect on, giving UT a 24-21 lead into halftime.

Kentucky would receive the ball after the break and regain the lead after just ten plays, finishing with Levis’ second rushing touchdown of the game.

The Volunteers’ offense would wear and tear on UK, this time on the ground, as Jabari Small gashed the Wildcat defense for a 37-yard touchdown.

Down by a field goal, Levis would continue to air it out for UK. The Cats’ drive would end after Alontae Taylor jumped a Levis pass for UT, taking it 56 yards to the house for a monumental score for the Volunteers.

Levis would respond, connecting with Robinson for a 15-yard touchdown o the Cats ensuing drive, cutting UT’s lead back down to three.

Kentucky’s defense would be unable to stop Hooker, as the Vols QB struck for the fourth time, hitting Tillman in the end zone for a gutting blow to UK.

The Cats wouldn’t go away, as Izayah Cummings would catch a 24-yard touchdown pass from Levis just two minutes after the last UT score.

UK’s defense would finally step up and take the UT offense to fourth down in the redzone, bringing McGrath out for a 35-yard try.

McGrath would push his kick right of the goalposts, giving UK the ball back with a chance to win.

With under five minutes remaining, Kentucky would begin to march down field, getting into a third–down situation just in UT territory. The third-down play saw Levis sacked by Tennessee, with the referees failing to call a facemask penalty on the Vols.

Red-hot, Mark Stoops would receive a 15-yard unsportsmanlike conduct penalty, putting UK in fourth and 28 with the game on the line.

Levis would step up and connect with Cummings, getting just past the line-to-gain.

With a fresh set of downs, Levis would fail to complete three straight passes, putting the Cats into another fourth-down play.

UT would bring pressure, resulting in Levis heaving a deep-ball that would fly out of bounds, resulting in Tennessee sneaking out of Lexington with a 45-42 victory.

“We didn’t keep up with [UT]. We didn’t tackle very good in space. And we didn’t cover very good,” Stoops said.

The loss makes three in a row for UK, following a 6-0 start.

Up next for the Cats is a trip to Nashville, to take on the struggling Vanderbilt Commodores on Nov. 13 at 7 p.m. E.T.

“We have to play better,” Stoops said.